Our second day in Sintra starts out rainy but it is supposed to clear up by early afternoon. We catch the bus near the palace we visited yesterday and head up the steepest, narrowest road we have probably ever been on.  The bus had to stop and back up three times to navigate the hairpin turns.  We were standing in the front of the bus so had a view of the road ahead, which, by the way, soon lost the center line and became a one way road as it was too narrow for traffic in both directions. 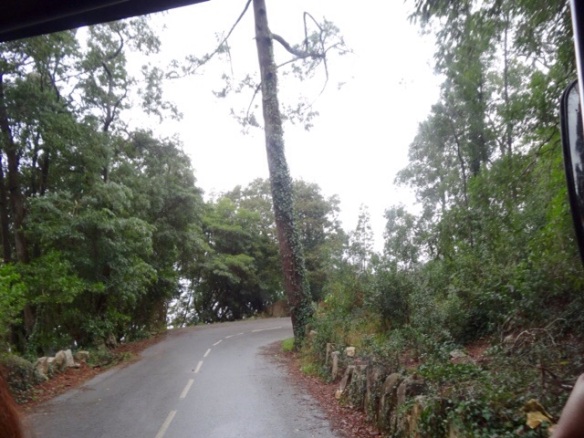 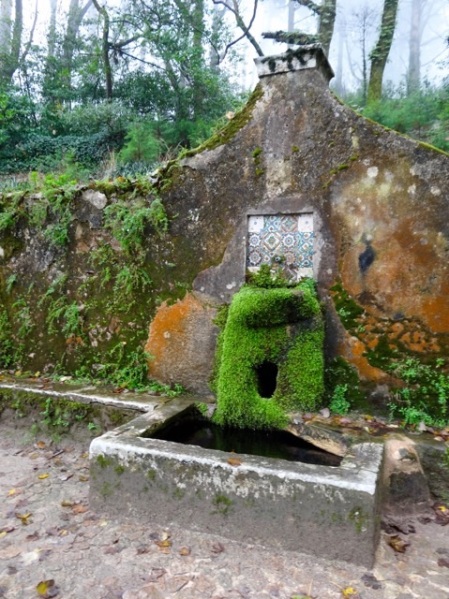 It was very misty so we couldn’t see very far but it was pretty.

Soon we get our first glimpse of the Palace of Pena. This palace was one of the last residences of the Portuguese Royal Family. It is a fairy tale castle with Moorish and Manueline influences and is one of the finest example of Romantic Era architecture in Portugal. This link has more information about the palace and the park that surrounds it if you are interested.   https://en.m.wikipedia.org/wiki/Pena_National_Palace# 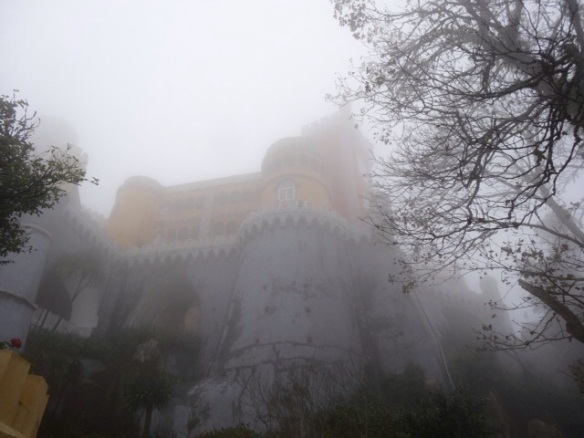 We enter through this grand gate.

The next gateway is just as spectacular. Love it! 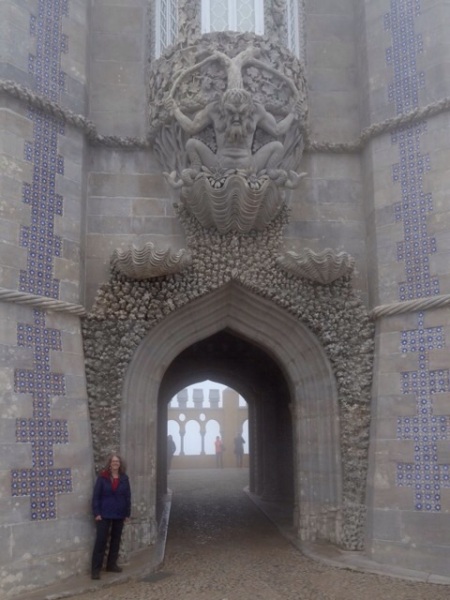 The Cloister is part of the original 16th century Monastery that was built into the present Palace.  It is decorated with Hispanic-Arabic tiles from 1520. 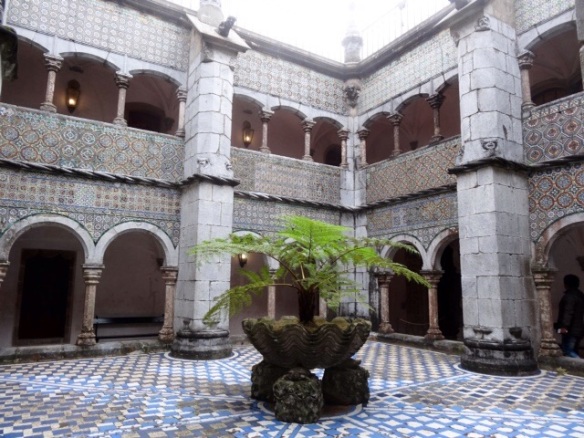 The dining room has a sculpted ceiling and tiled walls…

and here is one of the first bathrooms in the Palace.

I am in the bedroom of King Ferdinand II.

and both of us in the Billiard room.

The kitchen is huge and has the original pots, pans and ovens. 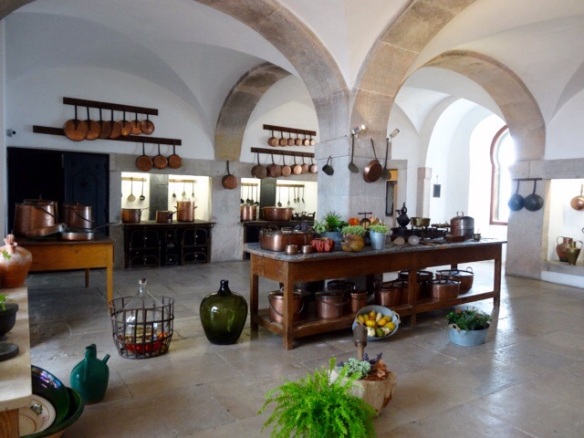 Next we explore the outside of the Palace.

The weather hasn’t improved all that much but we decide to hike up to the Cruz Alta, where there is a carved stone cross.  This is the highest point in the Sintra Hills.

The walk up to the cross was lovely.  The park around the castle covers 85 hectares with several historic gardens and many buildings and grottos.

On the way down from the cross we take this little crooked very winding path which eventually takes us to the Valley of the Lakes but not without some detours along the way. 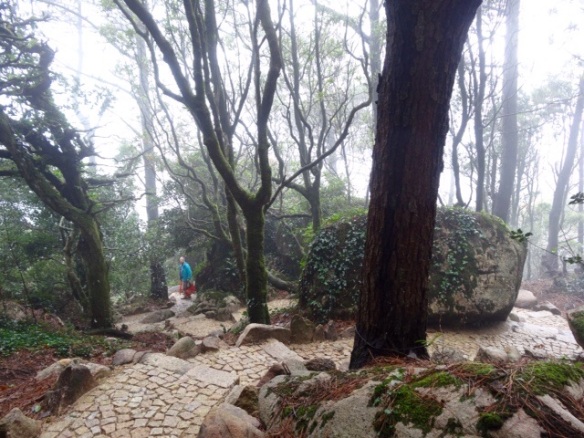 The view from one of the paths.  That village way in the distance actually had sunshine. 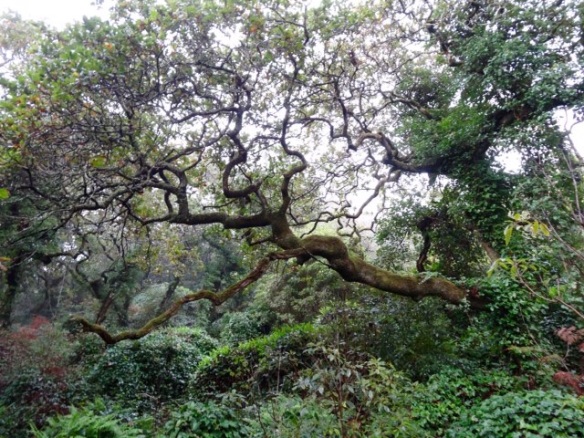 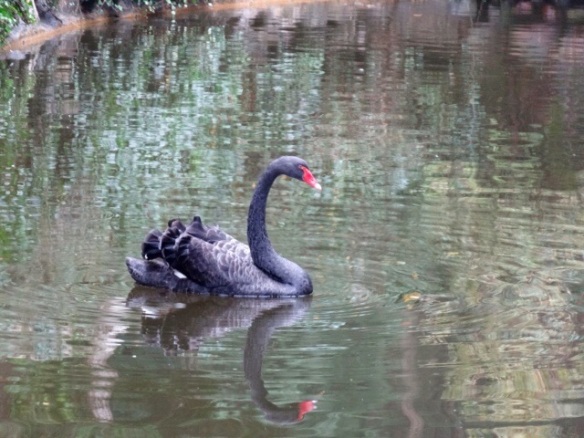 The Valley of the Lakes has a castle tower for a duck house. We didn’t see many ducks, but we did see this beautiful black swan. 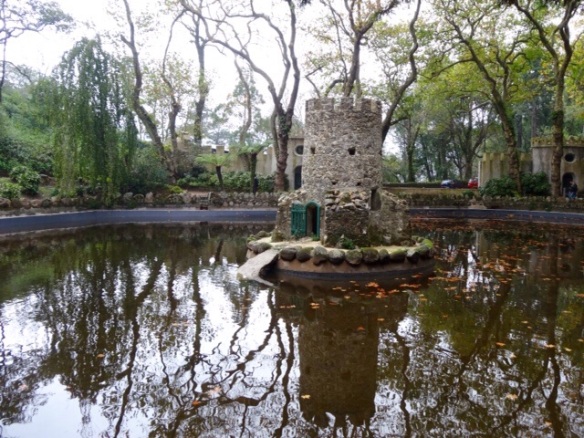 The leaves are falling and they are huge! 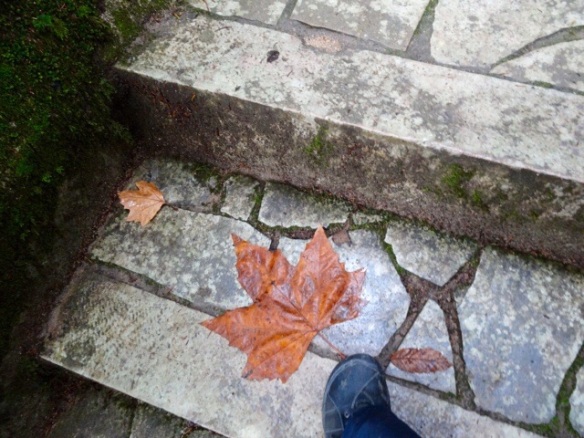 We still want to see the Moorish Castle so we hike over there and have about an hour and a half before it closes. This castle was built between the 8th and 9th century by the Moors to defend the local territory and the Maritime access to Lisbon. There was a bit of blue sky but it quickly disappears, along with the supposedly fantastic views from the walls and towers.  On a clear day it is possible to see the Atlantic Ocean, but we are barely able to see the castle!

In some places along the castle walls the walkways are not much more than 18″ wide, and there are no railings! 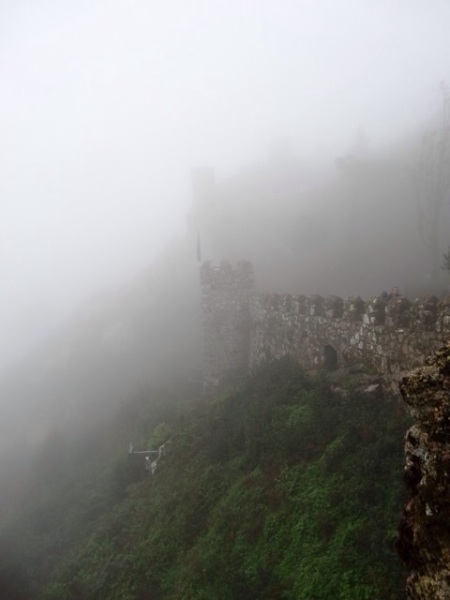 We finally admit defeat even though we have only seen a very small part of this ancient castle. We are cold and wet and can’t see much of anything so we decide to hurry back to the bus stop and try to catch an earlier bus and train home.  We get there just in time and we manage to get a seat for the ride, which takes us all the way to the train station. I am happy not to walk that long curving road from the station up to the Sintra Palace where we caught the bus this morning. 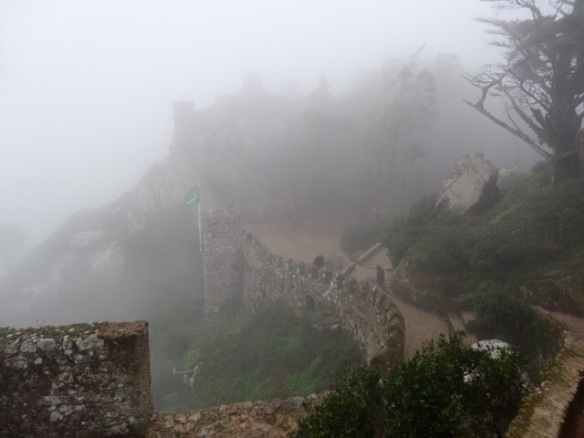 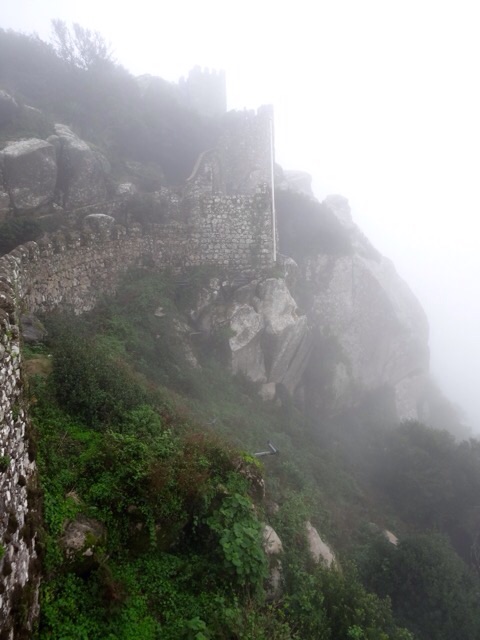 The Sintra Station is the only train station we have seen that isn’t coverd in graffiti. It has been a good day, but also a long cold, wet day and I am glad to be heading home. 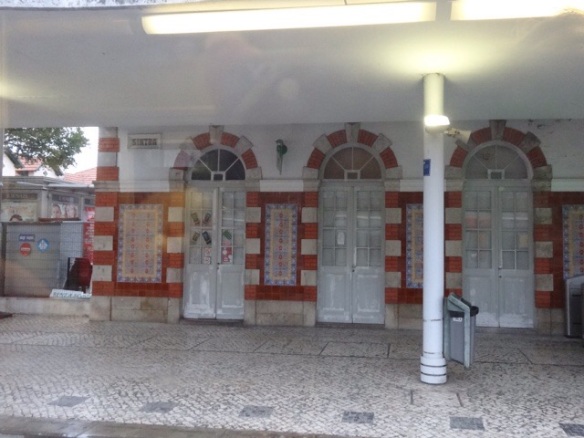