Cartagena was founded in 223 B.C. and was conquered by the Romans in 209 B.C.  It is just a half hour south of where we are staying.

The Ayuntamiento, or Town Hall of Cartagena is a beautiful marble building on the main street.

The Naval Museum nearby was free and an interesting place to visit.  Both of us were impressed with the scale model ships, especially this huge one of an 18th century ship from the Royal Armada. 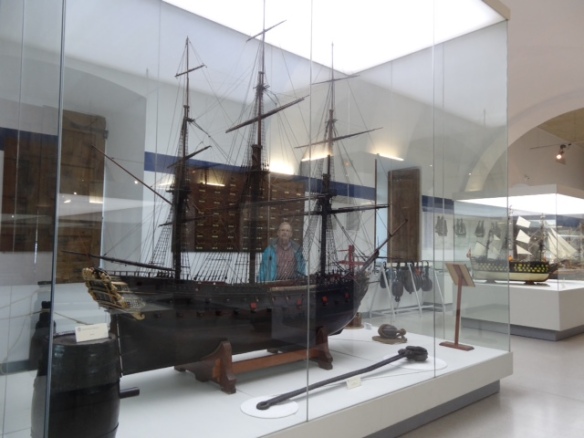 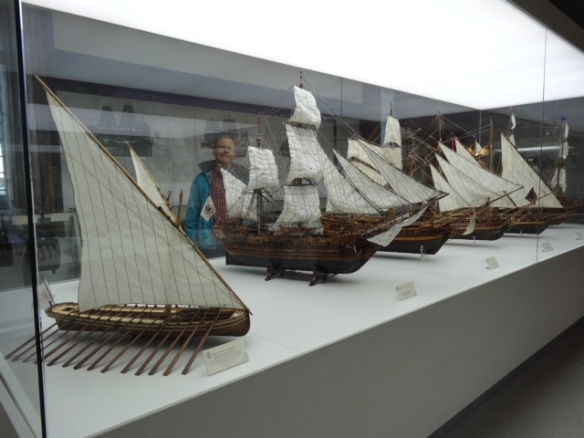 This huge anchor was just begging to have its picture taken. 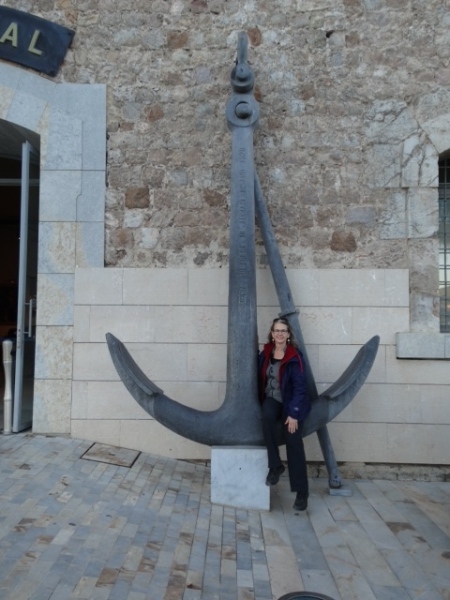 The Zulo Sculpture by Victor Ochao is a very powerful memorial to victims of terrorism.  It is over 16 feet tall and weighs over two tons.  Very impressive. 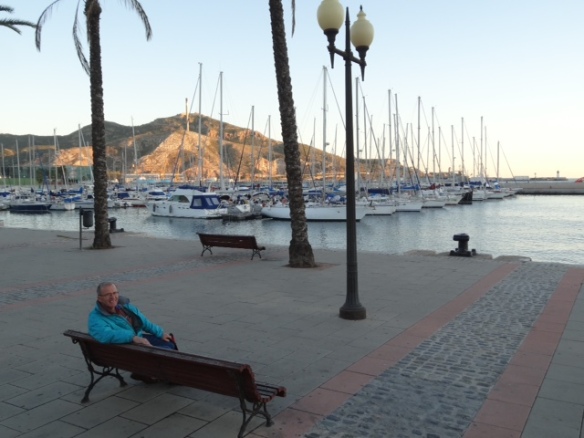 but not before I took a moment for this photo.

Part of the afternoon was spent exploring the Museum of the Roman Theatre of Cartagena.  The museum’s entrance is in a building near the Town Hall and is connected by a tunnel to this Roman theatre built in the 1st Century by Emperor Augustus.

Click here to see a video and virtual reality tour of the Theatre and Museum, as well as more information about the archaeological excavation of the theatre. 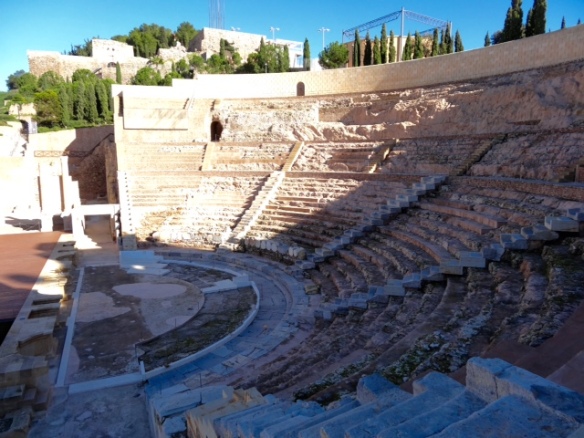 An aerial view shows where the theatre is located in relation to the theatre and gives a good indication of just how large it is.  The tunnel went from the building at the bottom of the picture, under the ruins of the Old Cathedral of Santa María la Vieja  into the theatre.

This photo showed what the theatre looked like before excavations were started in 1988.  The arched doorway of the Old Cathedral is visible in the before and after excavation photos. A lot of buildings were built over the seating area of the theatre and all of these were removed as excavations continued. 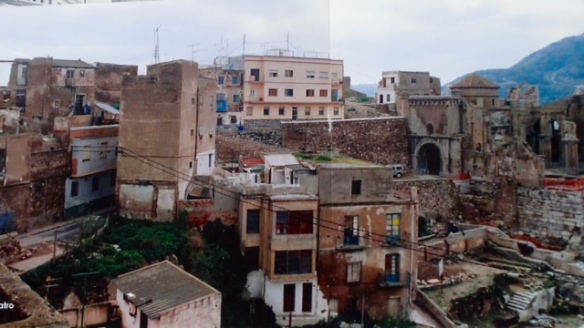 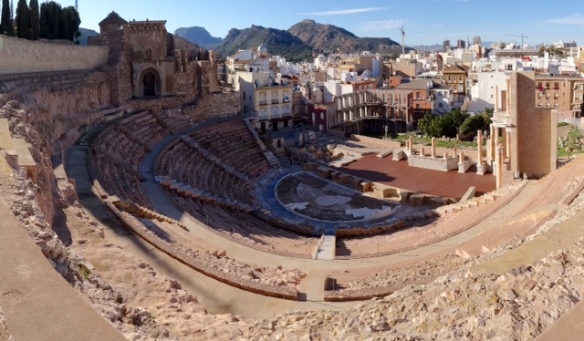 There are a lot of buildings near the theatre that are under re-construction. It seems that the old façades are being kept but we aren’t sure what will be built behind them.

Conception Castle is a 12th Century fortress on top of the highest of the five hills in Cartagena. This fortress has been a Roman Temple, a Muslim Citadel , a medieval castle and during the Civil War it held the sirens that warned the city’s population of bombings. We climbed the hill to the Castle and were rewarded with amazing panoramic views of Cartagena, 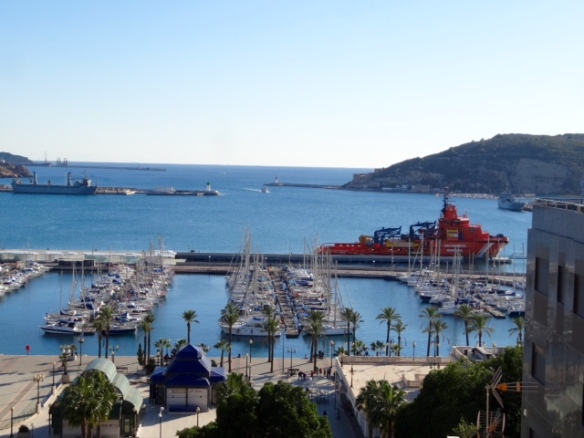 and the old bull fighting arena. We had parked our car way down there!

A young man from the Philippines asked us to take his photo and then he took this one for us, as well as several more of us for himself as a ‘souvenir’. I thought I took lots of pictures but he sure had me beat!

One of the exhibits inside the fortress were several dioramas with these little animated computer generated figures that walked and interacted with each other.  I found them quite fascinating.

On our way back to the car we pass this building which incorporated a very old building and a very new building. 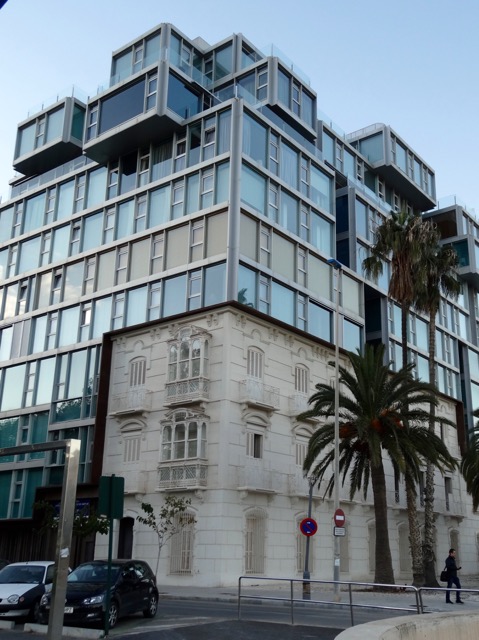 We saw some interesting graffiti,

this statue of of Cristóbal Colón, which is Spanish for Christopher Columbus,

and a rather clever sign for a coffee shop. 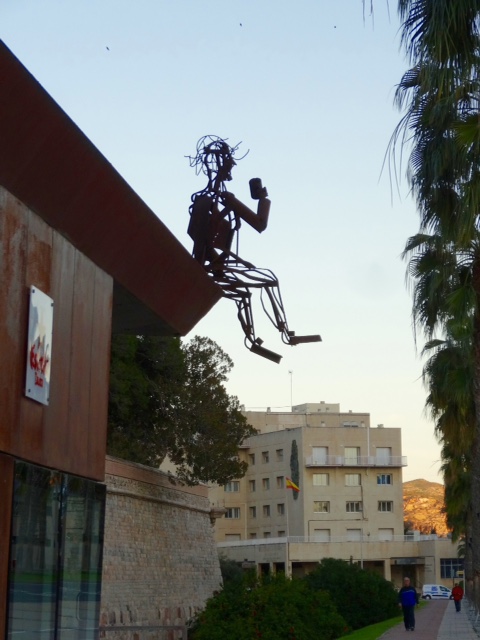