We are excited to be beginning another extended holiday.  We left home on September 5th and arrived in Amsterdam on Wednesday September 6th.

I love sunsets viewed from a plane window. This one was somewhere over northern Canada on our way to Reykjavík, Iceland, where we had a short layover before catching another plane for the second leg of our trip.

The clouds look so amazing when seen from above.

This photo is for my friend Pat who recently tried to ride on a Segway and didn’t care much for the experience.  Well these security officers absolutely flew around the Amsterdam airport, at least they did until one of them fell off his Segway in a rather loud crash! 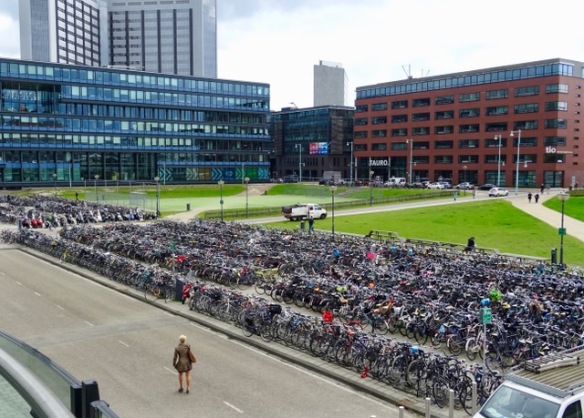 Just a few of the bikes near one of the train stations where we found a taxi for the last leg of our journey. The taxi driver informed us that there are more bikes in Amsterdam than there are cars!

Thursday morning we heard a commotion outside our apartment and we were interested to see how construction materials are moved into the apartment next door, up and over the balcony.  This is also how people move furniture into their apartments when the stairs are too steep and narrow for anything but small items. 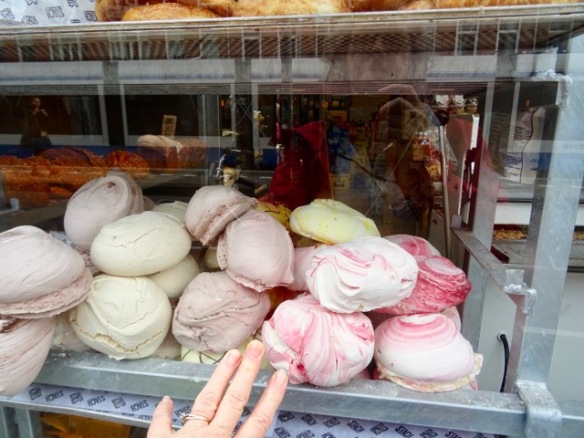 We went out for a walk this afternoon and these meringues in the window were enormous. I really can’t imagine eating one, they are so huge.

The first canal we cross on our walk is the only one we saw that did not have houseboats lining both sides.

This electric two passenger car is probably the tiniest car I have ever seen.

They are so tiny that they are allowed to park on the sidewalk along with the bikes.

We decided not to visit the Anne Frank House as we both remember it from our last visit to Amsterdam almost 40 years ago…and the lineups stretched over two blocks long. 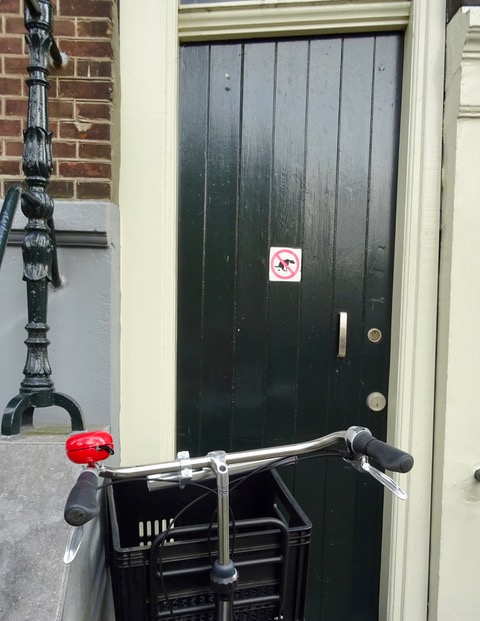 Take a look at the sign on the door.  Too funny..

The main train station in downtown Amsterdam, which is currently under construction is where we arrived on our visit to Amsterdam so many years ago. We wondered if we would remember any of it, but we didn’t.  It is enormous, and includes both wings on either side of the construction area.  I couldn’t get it all into one photo and there is now a mall on the backside of the building with stores and restaurants. 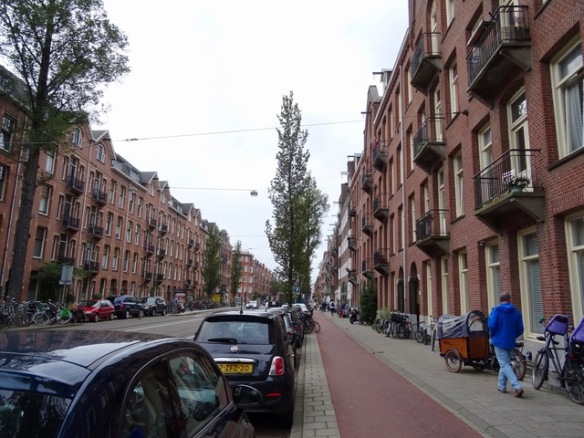 We caught a tram home as we were both a bit tired. My fitbit informed me that we had walked over 15,500 steps which is almost seven miles! This is the main street near our apartment.  These apartment buildings stretch block after block as far as we can see.

Many of their doorways have decorative tiles on either side of the doors. I thought they were quite beautiful. We returned home to an email from Icelandic Air informing us that our flight home from Reykjavík has been cancelled!  I guess we need to sort that out tomorrow.  Travelling isn’t without its challenges, and it certainly isn’t boring.