Today has two posts as I am catching up on our last day in Croatia and our first full day in Italy.

When we arrived in the old town of Dubrovnik we were greeted by a marching band.

First stop is Fort Revelin, a fortress that was built in 1462 outside the city walls to help protect Dubrovnik. The ground floor is the Dubrovnik Archaeological Museum which isn’t very big, just a  few smallish rooms, so it doesn’t take us long to see everything.

On our way to the port I need to take a few more photos of Dubrovnik’s fantastic old buildings. There is just so much to see here.

Here is a different view of the old town as we travel on the ferry to Lokrum Island, and yes, the water is really that blue!

First stop on the island is the Benedictine Monastery complex, from the 15th Century where there is an authentic replica of the Iron Throne which was donated by the Game of Thrones. This photo makes me think of a quote on a card a friend gave me years ago. “Inside every woman is a queen, speak to the queen and she will answer!” There is a small museum here with some interesting videos about the filming of the series and a map of all the Croatian filming locations.

The cloister of the Benedictine Monastery.

We find a bench in the gardens for our lunch but need to share our food with the local peacocks and bunnies. I have never seen young peacocks before, and now here they are eating out of my hand!  They do like rice cakes. I don’t know how all the rabbits found their way here but there are lots of them everywhere,

A walk along the shore takes us to these strange rock formations which are a favourite place for sun bathing and swimming.

We walk across this natural stone bridge, rather carefully as it wasn’t terribly wide.

The well of Charlotte, an oval stone pool, was once used for bathing  and perhaps for watering exotic plants but it is now all dried up. It looked like a site for secret ceremonies, accompanied by strange creatures.

The Dead Sea, is a little salt water filled lake linked to the open sea. 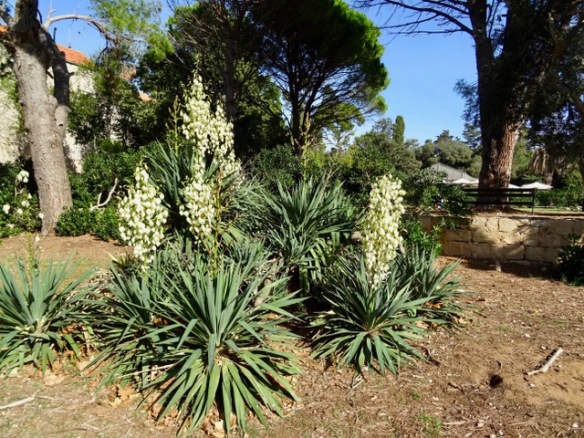 a tree that needed a hug. 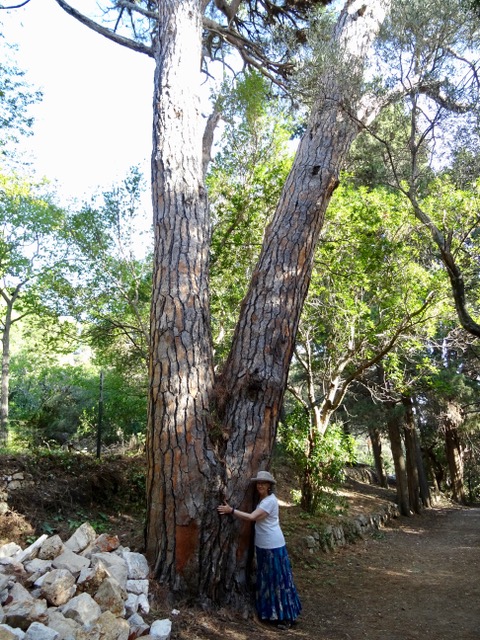 This photo of the Path of Paradise, or the Celestial Way, doesn’t really show how steep it is, but it is a very long uphill path to Fort Royale, also known as the Tower of Maximilian. Those are people way down at the bottom and we are still only about two thirds of the way to the top. 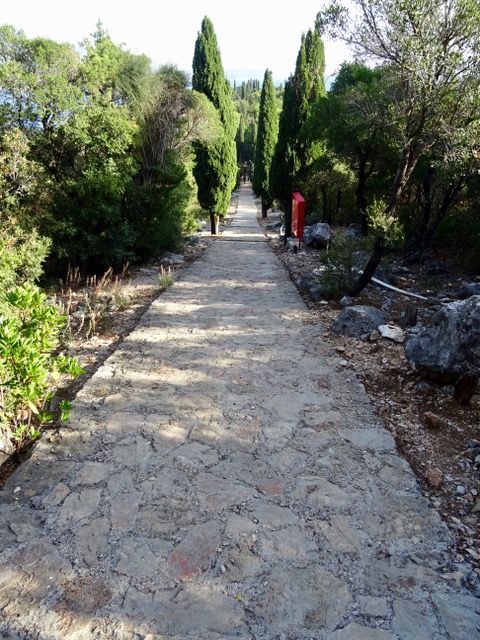 The view from the top is worth the climb.  Those rocks people sunbathe on are way down  on the part of the island that sticks out into the sea. 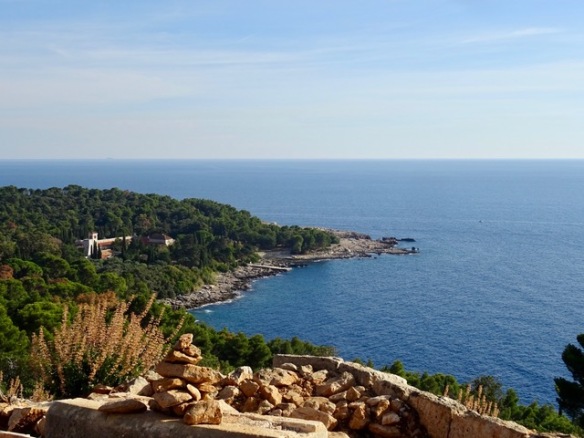 That is Dubrovnik in the distance and…

and here is the tower. I was surprised that we are able to go inside, and we both had a laugh when we saw the toilets which are on the top of the tower.

Does anyone know what these fruits are?  They are about the size of a large cherry.

There are peacocks everywhere on the island. They were imported from the Canary Islands about 150 years ago. 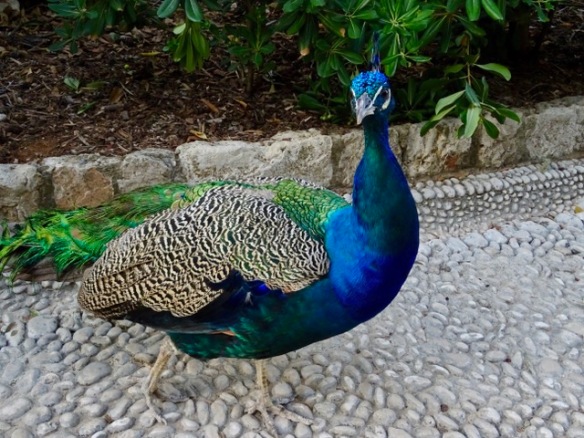 The Botanical gardens were the location of the City of Qarth in the Game of Thrones but many of the plantings were damaged last winter by cold weather and high winds and it looks pretty sad now. Only the bigger sturdier plants seemed to have survived. It was actually a very disappointing botanical garden.

Soon it is time to return to Dubrovnik. No one is allowed to spend the night on the island because it was cursed by Benedictine monks who were forced to leave the island  by a French Army General. They spent their last night there walking three times around the island with candles carried upside down so that the molten wax left a trail. As they walked they chanted “Whosoever claims Lokrum for his own personal pleasure shall be damned!” At dawn they left and the curse did its work. Every new owner of the island suffered misfortune of some kind including death, murder, bankruptcy, earthquakes, and shipwrecks. As we return to Dubrovnik we see lots of  boats heading out of the harbour. 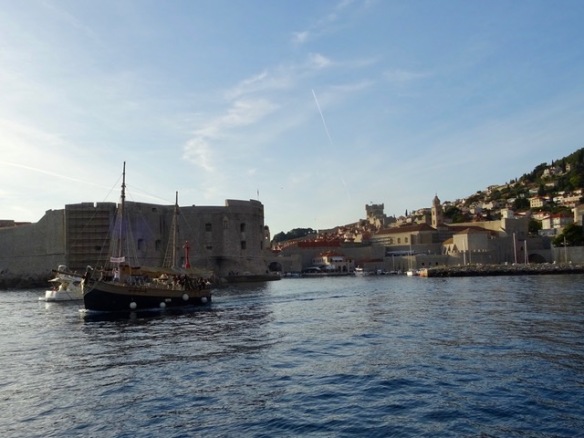 Here we are walking towards the entrance to the walled city… 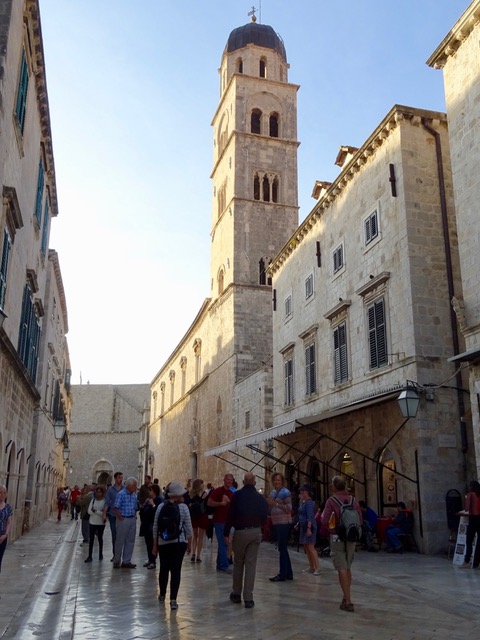 and we pass through the gate with its massive doors one last time. Although we spent a week here we could easily have spent even more time in this enchanting city. 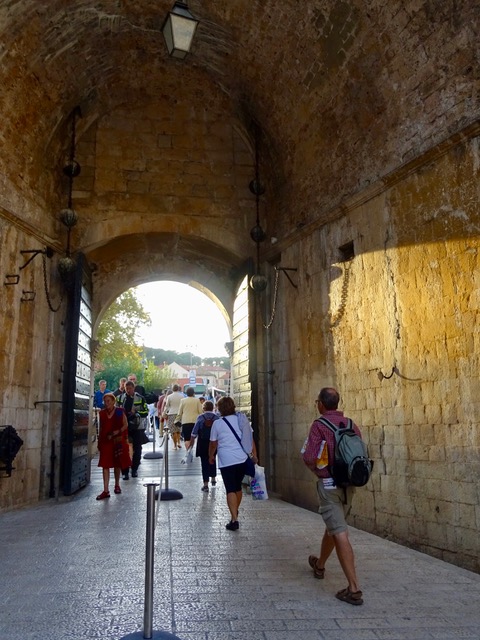