Rome’s greatest amphitheater was commissioned in 72 AD by Emperor Vespasian, and we are visitng it today. There are a lot of people outside the Colosseum trying to sell us tickets, tours and trinkets. Our ticket from the Forum yesterday also gives us ‘skip the line’ entrance today. No waiting in long lines to buy tickets! 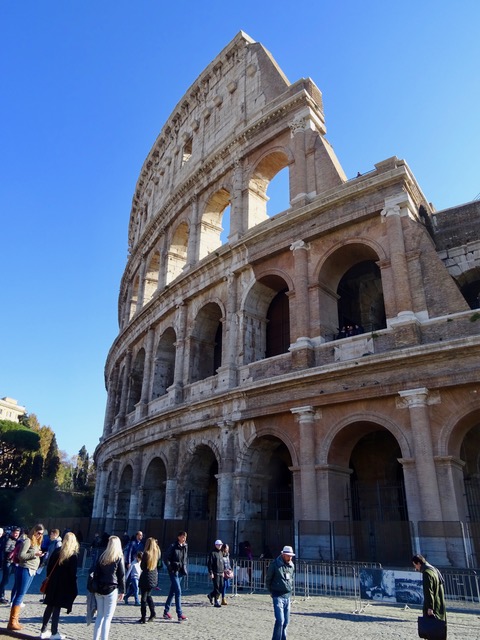 It is a pretty spectacular place. The floor of the arena is gone so we can see the rooms beneath the arena that were used to hold the wild animals, prisoners, props and gladiators.

Bob took some Classics courses in university but I bet he never thought he would get to see many of the places and buildings he read about so many years ago.

These arches were made without mortar, just the keystone in the centre of the arch to hold it all up. Here they are almost 2,000 years later, still standing. 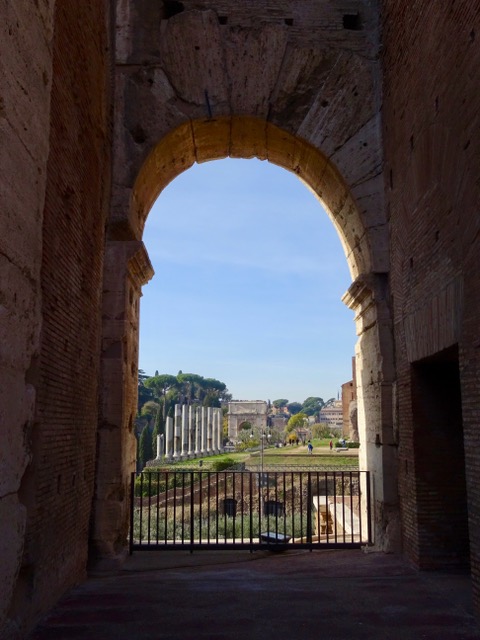 Looking down into the internal corridors that allowed the large crowds to enter and exit the arena very quickly. The arena held 55,000 people, who were seated according to rank. The poorest citizens were seated high up at the to of the arena, but they were sheltered by a huge canvas awning that was supported by poles on the top of the arena. This is a site with lots of interesting information about the Colosseum.

A small portion of the floor has been reconstructed on one end of the Colosseum. The arena floor would have been covered in a think layer of sand during events. In the opening games, which lasted 100 days in 80 AD, over 9,000 animals and 2,000 gladiators were killed!

There are even some of the original marble steps.

There is a museum area on the second level of the Colosseum with models, paintings, sculptures and other information about the arena. This model shows the internal corridors as well as how the seats fit over everything. It really helped me visualize what it would have looked like. 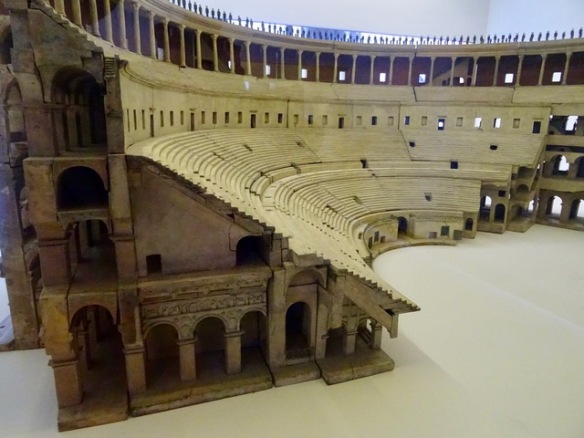 This also showed a reconstruction of the arena  and what it looks like today.

This little snuff box was one of the objects with images of the Colosseum. It was a mosaic image with the tiniest little pieces of mosaic I have ever seen. Part of the exterior wall of the colosseum collapsed during earthquakes in 847 and 1231 and this image shows the arena before reconstruction. 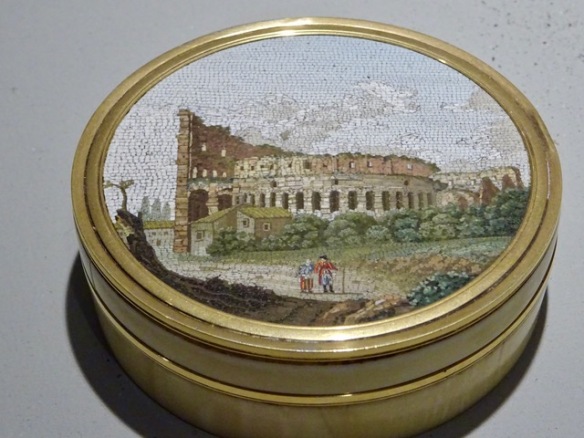 Here are a couple of views around the arena from the second level, where people standing.

We spent a couple hours in the Colosseum and then walked north towards the Forum of Augustus, Trajan’s Forum and Trajan’s column. These ruins are right alongside a main road. In some cases, more modern buildings were removed so that these ruins could be excavated

Below the 16th Century Church of San Giuseppe Dei Falgnai nearby is a small museum and the dungeon, which according to Christian legend, is where St. Peter and St. Paul were imprisoned before they were crucified. It was dark, wet and filthy. Prisoners were dropped into here through a grate in the floor above. We get to walk down the modern steps.

Next we visit the National Monument of Victor Emmanuel II, which also has The Tomb of the Unknown Soldier, which we somehow didn’t see. We plan on coming back to this area so we will have to look for it then.

We climb to a high terrace for some great views. Bob is convinced that this this is as high as we can get, but I am equally convinced that we can go higher. I am sure I saw people right up on the very top of this building when we were visiting the Forum a couple days ago.. 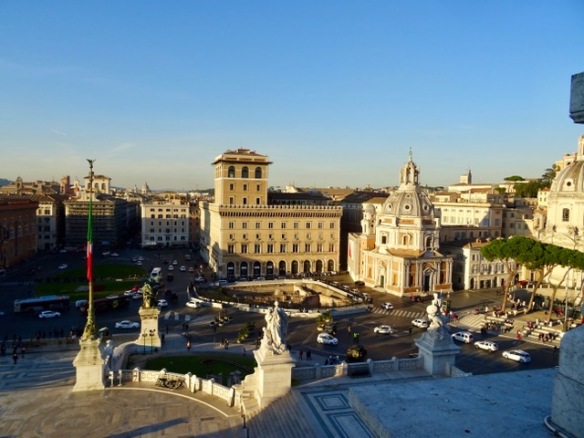 I was right! There is an elevator that takes us up to the rooftop for panoramic 360 degree views of Rome. 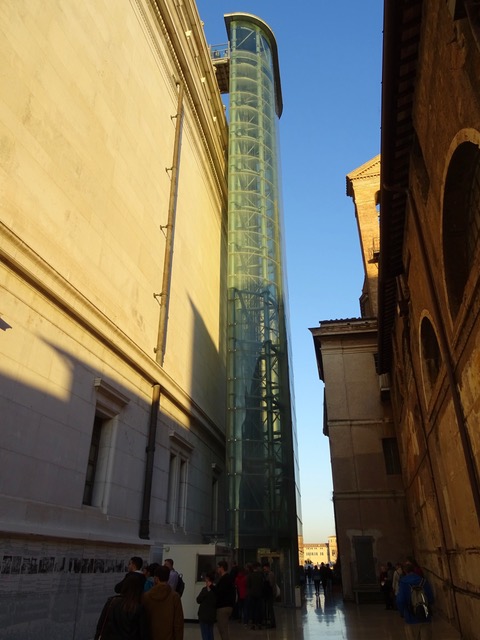 Bob is trying to decide where things are… 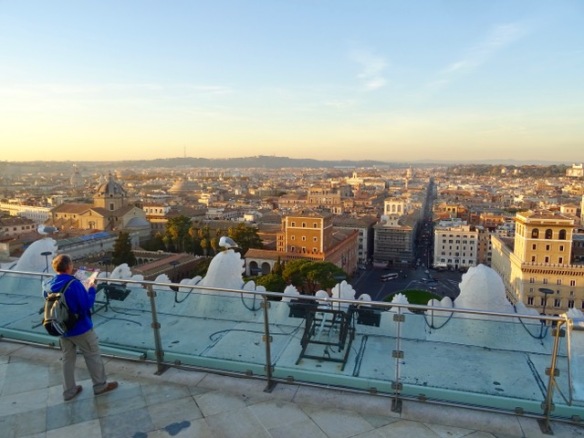 and I am just enjoying the view.

We can see mountains in the distance, and there is some smog but not nearly as much as I expected. As the sun starts to set, the golden light on Rome’s buildings is beautiful. Notice the seagull. I think he is following us!

There are twin statues on either end of the building that can be seen from many of Rome’s neighbourhoods.

It is a long way down, and those people are standing on the first terrace we took photos from. The ground is much further below that, way down at the base of the building across the street.

On our way down we stop once more at the terrace and take this photo of Trajan’s Column.

By the time we reach ground level the sun has set and it is getting dark. 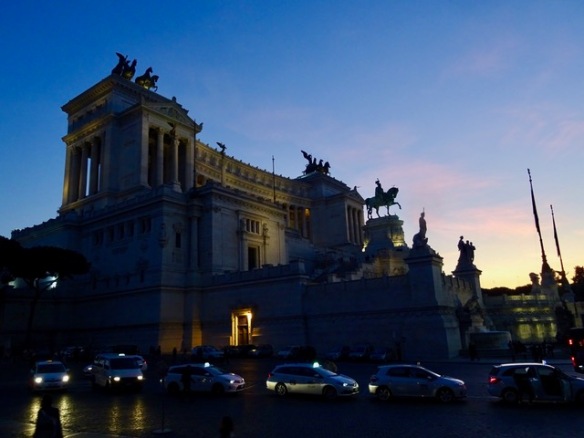 Just as I am taking another photo o Trajan’s Column the lights come on!

The ruins look quite different all lit up. While we wait of our bus a street musician serenades us with lovely violin music.

It has been a full day.

We stop at our local grocery store on the way home, which is conveniently located right in the bottom of our apartment building. I just have to take a photo of these interesting looking cauliflowers.

2 thoughts on “The Colosseum, Rome”