The Vatican Museums were too much for us to see in one day so today we are back to finish our visit. This modern sculpture in one of the courtyards is called Sphere Within A Sphere, but it reminds me of the Death Star in the Star Wars movies. Nice reflections though. 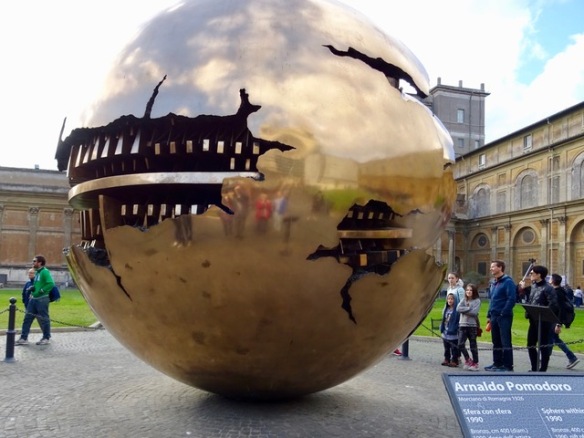 On our way to the galleries we missed yesterday we have to retrace some of our steps. Two rooms of animal sculptures were closed yesterday but today they are open.

There are sculptures of lots of different animals, and even some animal inspired furniture. 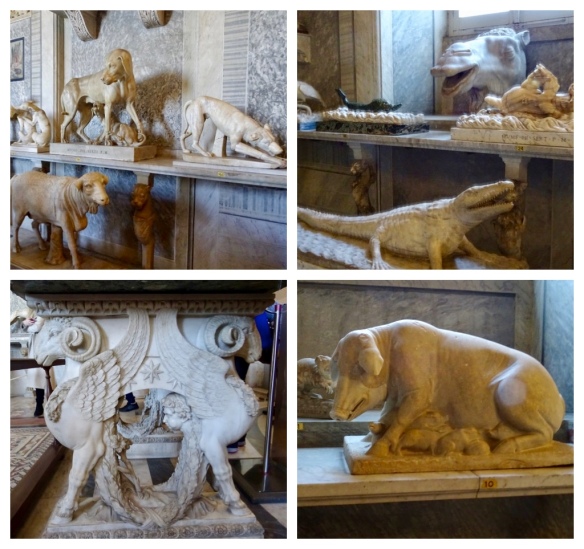 This poor bull is being attacked by everyone, a man, a dog, a snake and even a scorpion.  Can you spot the scorpion? 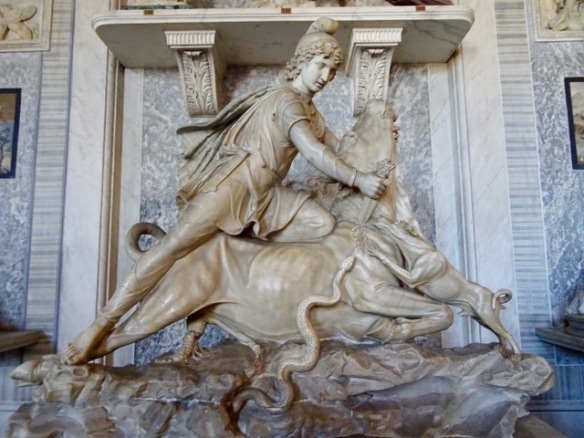 and a bit further on, more ancient mosaics that we are allowed to walk on. At least the beautiful centre panel is roped off.

and one more mind boggling room are just before the Raphael Rooms.

The Raphael  Rooms were the apartments of Pope Julius II (1503-1513) and they are stunning! For a virtual tour of the rooms where you can check out all the walls, ceilings and floors I suggest you click here. The rooms are beautifully photographed and give a much better idea of their grandeur than my photos.

The Room of Constantine…

The Room of Heliodorus

The decoration on the lower part of the walls looks more like it is sculpted than painted.

The Room of the Segnatura contains one of Raphael’s most famous paintings, The School of Athens, with its portrayal of famous philosophers. I remember studying this painting way back in my university days. 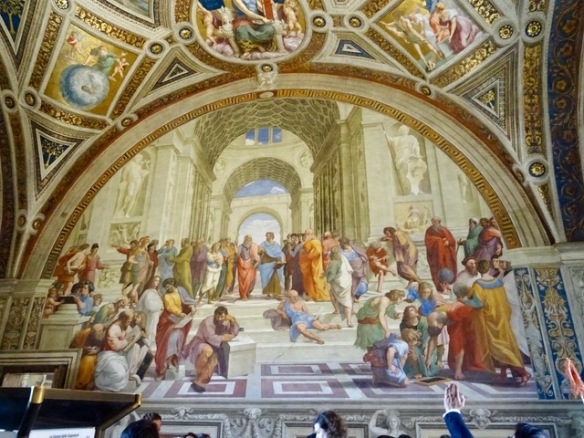 This painting along with the three other frescoed walls share this amazing ceiling.

Here are the ceilings from some of the other rooms. My neck was getting sore from all the looking up! 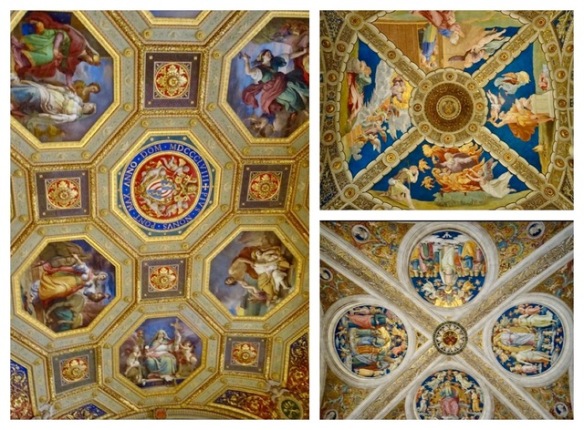 We continue and enter a room where the painted walls look like wallpaper and drapery. 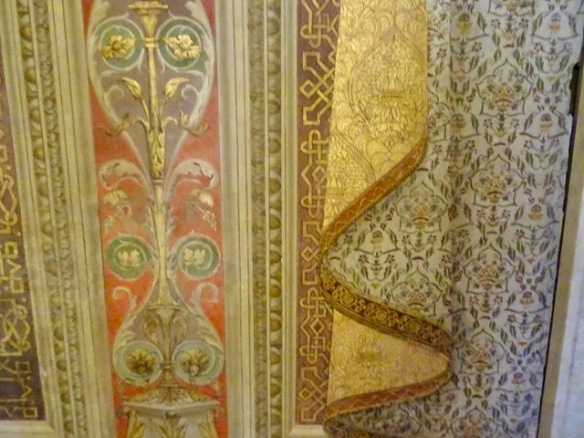 We are surprised that there is also contemporary art on exhibit. There are many famous names here but much of the work is exhibited in small rooms off a corridor on the way to the Sistine Chapel. Their display seems like an afterthought to me. Most people just walk past these rooms in their hurry to visit the main event, the Sistine Chapel. It is a pity because there is some interesting work here. 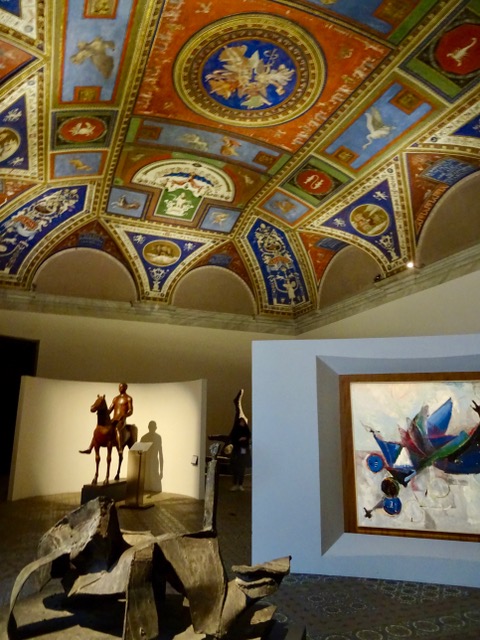 We saw this Pieta by Vincent Van Gogh, work by Francis Bacon, Kandinsky,  Diego Rivera, Chagall, Klee, Salvador Dali, Edvard Munch, and others along with papal robes designed by Matisse. 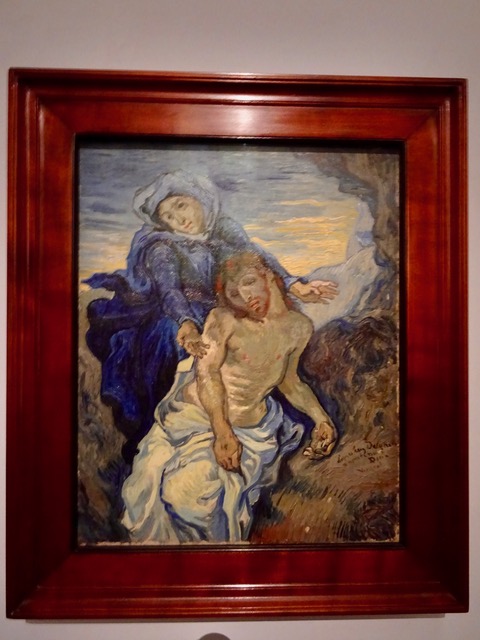 I was surprised to see Will Barnet’s Four Generations here as well. It was quite an eclectic collection.

We go back into the Sistine Chapel for a second visit. It was much busier than yesterday and lots of people were standing shoulder to shoulder on the chapel  floor. We were lucky to find spot to sit along the wall and contemplate this Michelangelo masterpiece one more time. Instead of going to St. Peter’s we take the ‘door on the left’ instead of the ‘secret door on the right’ to return to the museums. There is still a whole wing that we have not seen!

We get a different view of St. Peter’s from one of the museum windows. It is possible to climb the dome and stand outside at the base of the cupola on the top of the dome. I am hoping we will be able to do that before we leave Rome. 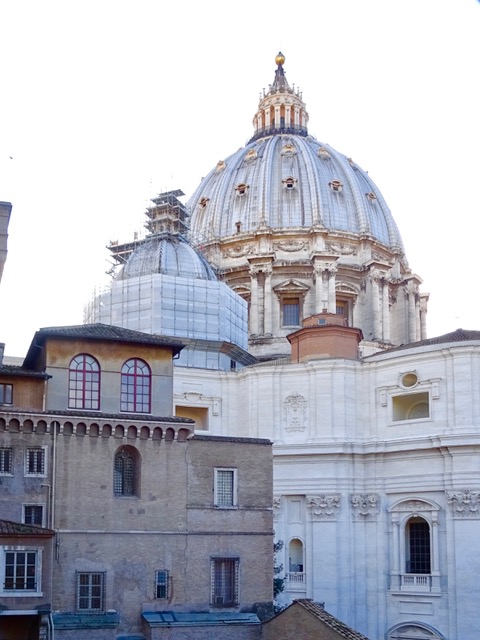 Room after ornate room stretches out before us. 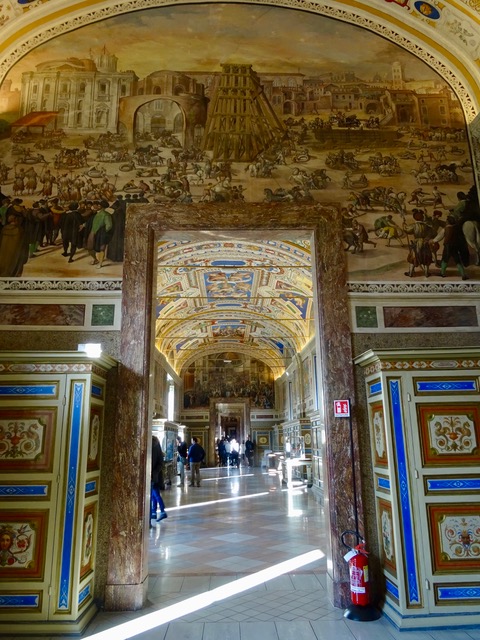 Some lovely mosaics, notice how small the tiles are compared to my finger, and the rather strange looking elephant!

We think that this was a printing press but the only label is in Italian so we aren’t sure.

Many of the rooms were lined with painted cupboards but I haven’t been able to figure out what they were for. They have labels that say Armarium followed by sequential Roman numerals.  I Google translated and Armarium is closet in Latin and the one I took a picture of was closet 137.  Now I wonder what was in all those closets? 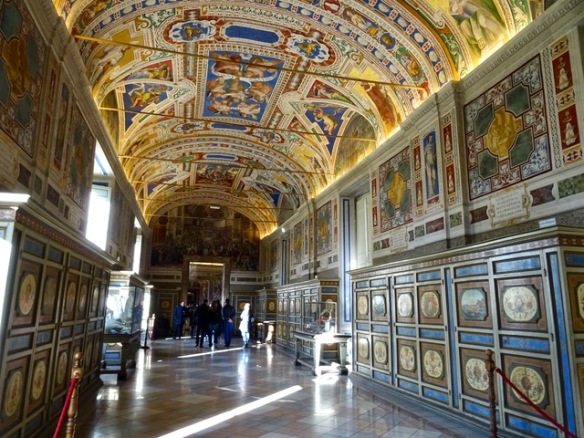 We are finished! We have seen as much as we can and we are ‘finished’ physically as well. We both enjoy visiting museums but we also find it very tiring.  Perhaps just too much stimulation? We leave by the double helix staircase designed by Giuseppe Momo in 1932. It has two intertwined staircases that allow people to ascend without meeting people descending.

After a brief rest back at our apartment I take the bus back to La Porta Blu Art School for another session of life drawing. Rebecca was an excellent model and I managed to find my way there and back by myself without incident, although the bus home was over a half hour late again. Poses ranged from 1 to 15 minutes.

Oh yes, and if you didn’t find the scorpion take a look between the bulls back legs.

3 thoughts on “The Vatican, and Life Drawing”