We start our visit to Pompeii with the colosseum which is the oldest surviving Roman amphitheatre. It had a capacity for 20,000 spectators. The Colosseum in Rome was built over a century later. 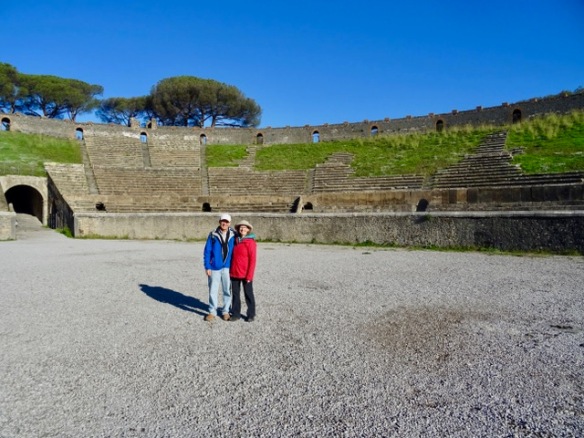 A display nearby had these 2,000 year old charred loafs of bread, dates and almonds.

One of the first houses we visit is called the House of Venus in the Shell because of a fresco on the end wall of the garden.

We are amazed at how well preserved and how brightly coloured the frescos on the walls are.

I took almost 300 photos. There was so much to see and I want to remember it all. I won’t subject you to all those photos and I am not going to try to identify all the different houses by name with a lot of information. If I do that this post will never end! So just come for a walk through Pompeii with us, and see the sights. 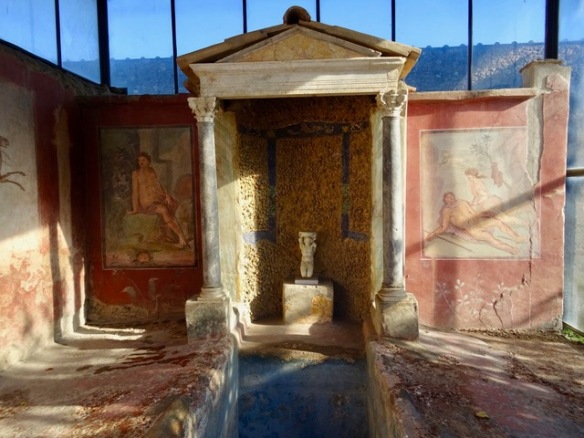 This was a fast food restaurant. Only the rich had their own kitchens, the rest of the people ate at these shops. 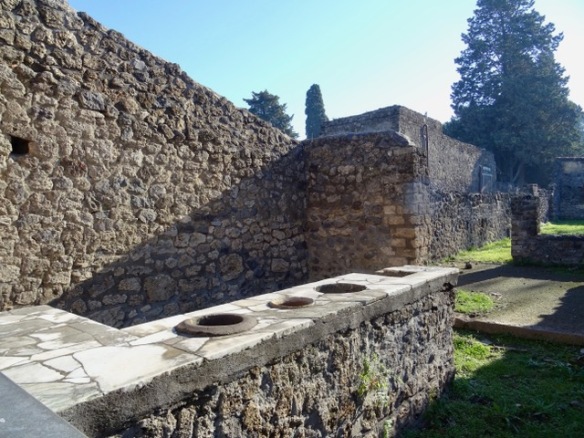 Maintenance is an ongoing project here, along with new excavations. These structures were never intended to survive for 2,000 years and be exposed to not only the weather but also to the damage caused by 2.5 million visitors every year.

In many areas we walk on the original mosaic floors!

These big stepping stones kept pedestrians’ feet dry, as the streets were often used to dump sewage. Water from fountains overflowed onto the streets and helped to flush them clean.

Tucked in to the corner of a house we see skeletons of some of the victims of the Mount Vesuvius eruption in 79 A.D. I felt quite emotional all day, walking through the streets and homes of the people who died here. I imagine the panic they must have felt when the volcano erupted. 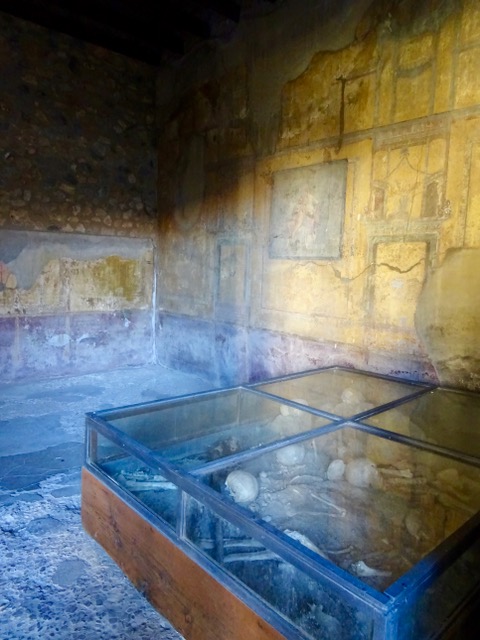 In the back room there are stairs to a second floor visible.

This is a view down into a room from a second floor. Most of the rooms in the houses were quite small, often between 7’x 7′ to about 10′ x10′, although the villas of the rich people also had some very large rooms. 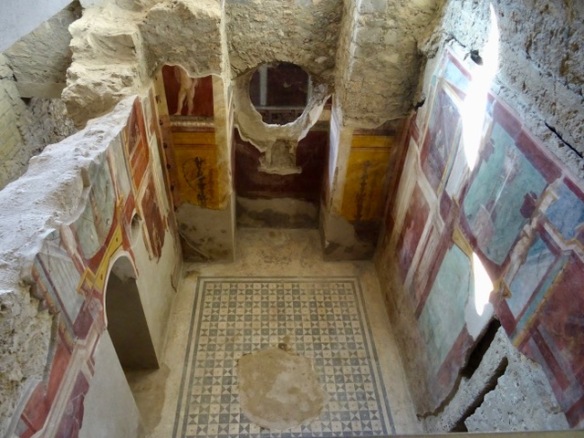 Some more well preserved frescos.  Red was the most expensive pigment so it was used by the wealthy. 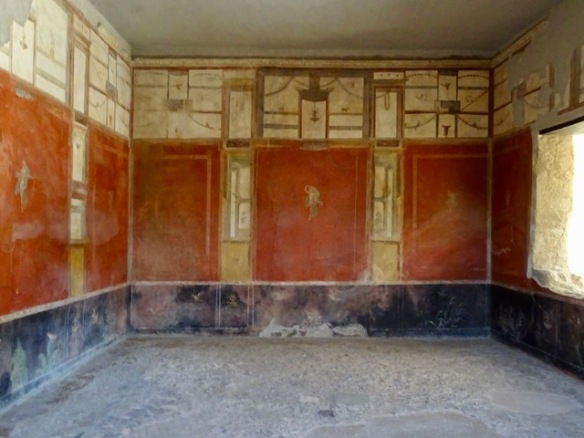 The decorated walls have some lovely small panels.

One of the large rooms in a villa with a pool and an open skylight to collect rainwater.

We find a high spot for some great views over Pompeii and have our lunch. 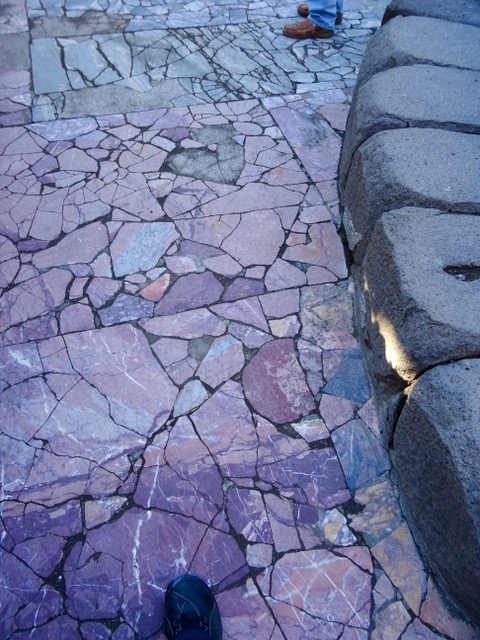 and a theatre which we thought was the main theatre in Pompeii.

Then we discover this one…

with this practice area for the athletes and gladiators.

This is a bit of info on the plaster casts of Pompeii.

These cast are in a house near where they were found. 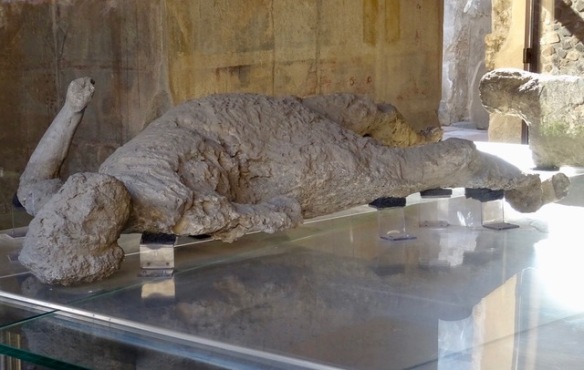 These casts of the victims of the eruption of Mount Vesuvius are powerful. Their features are clearly visible and their contorted postures reveal the moment of their deaths. I have been feeling emotional all day and seeing these body casts has a strong impact.

The next building we enter is the Lupanaro (the brothel), named for the cries of the prostitutes calling to their customers. They were thought to sound like she wolves! There are paintings on the walls above the doorways that were thought to have been sort of menu of the services available.

The rooms were small with short stone beds and pillows. They certainly don’t look very comfortable but they would have had with cloth mattress and pillows on top of the stone. 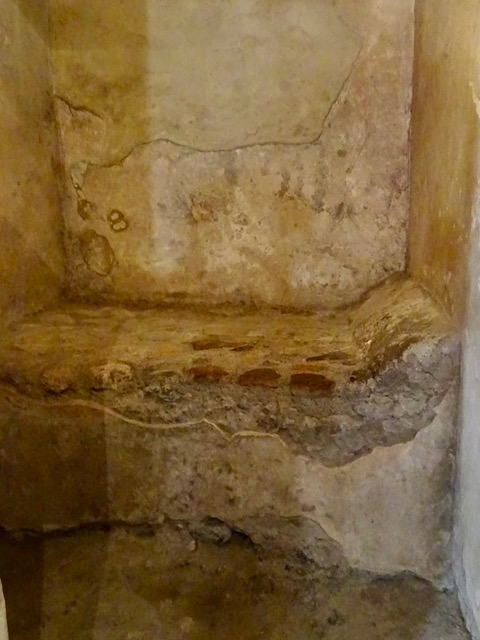 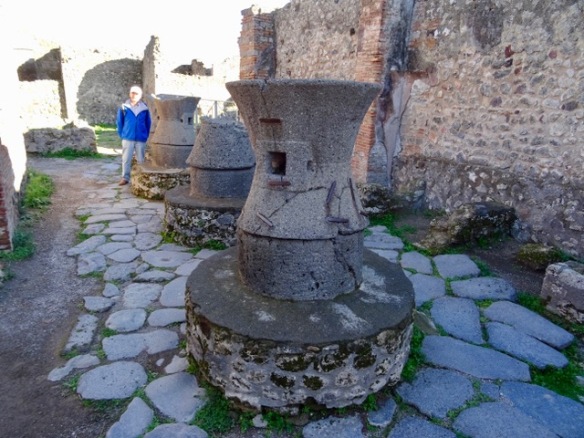 an oven that looks very much like a modern day pizza oven. 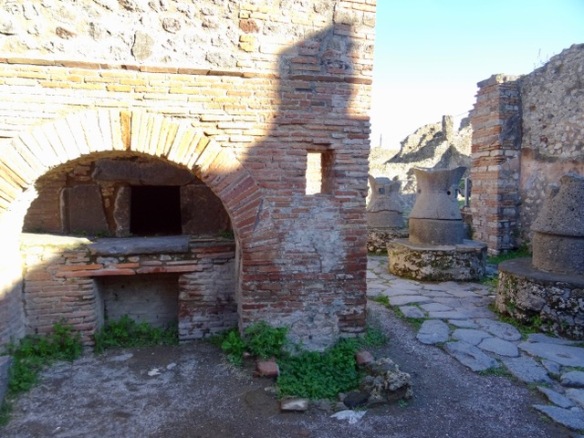 The long, straight streets were lined with shops and rooms that we think must have been houses for the common people.

One of the large houses has some rather startling imagery, however we discover that they are simply letting the viewer know that along with wealth, fertility was also necessary for true happiness.

The Pompeiians were masters at faux painting. The walls of their homes were covered from top to bottom with paintings and faux architectural details and finishes.

Looking into a courtyard.

At the end of a street I notice a building closed to the public and go take peek into the windows. I am rather startled to find more body casts. 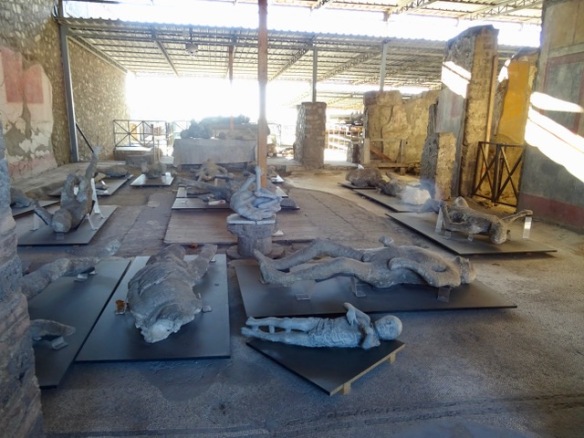 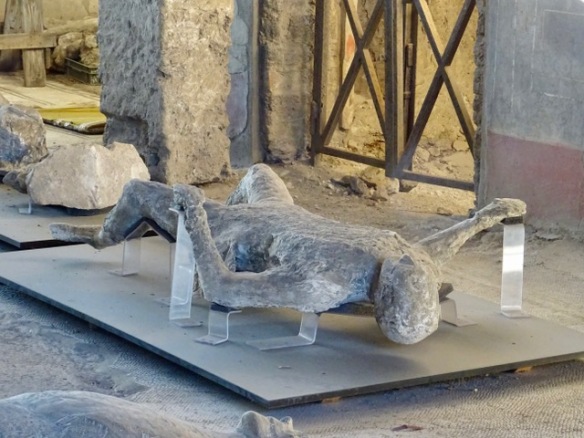 A child is frozen in time,

as is this dog  who is caught in the moment of his agonized death.

We walk through a necropolis with tombs for the dead towards…

the House of Mysteries. 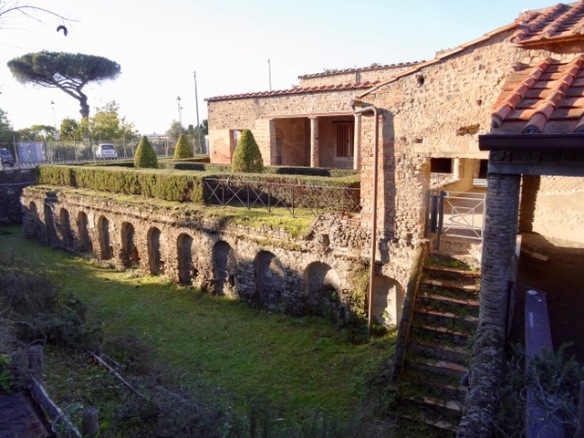 The house is named for these frescoes. This is an interesting article about the frescoes.

The floor is a different sort of mosaic. The surface is very even and smooth, and yes, we walk on this ancient floor too. 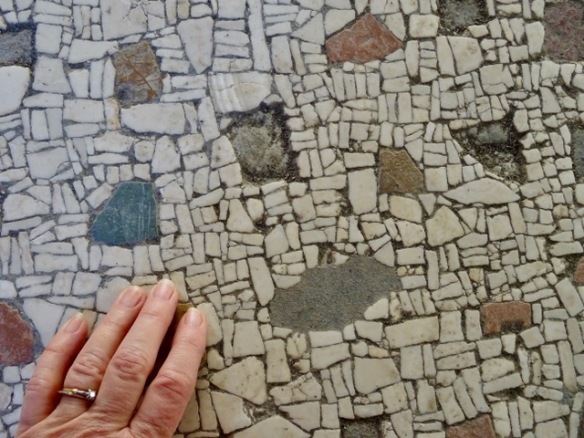 The wooden doors and shutters of the House of mysteries are petrified.

As we head back towards the town of Pompeii we see Mount Vesuvius. I read up a bit on this volcano and it is expected to erupt again. I don’t think I would want to be living anywhere nearby, yet 3 million people live within 20 miles of Mount Vesuvius’ crater. There is an evacuation plan in effect in case of another eruption but I wonder how effective that would really be. This is an interesting posting about why people live so close to a volcano. 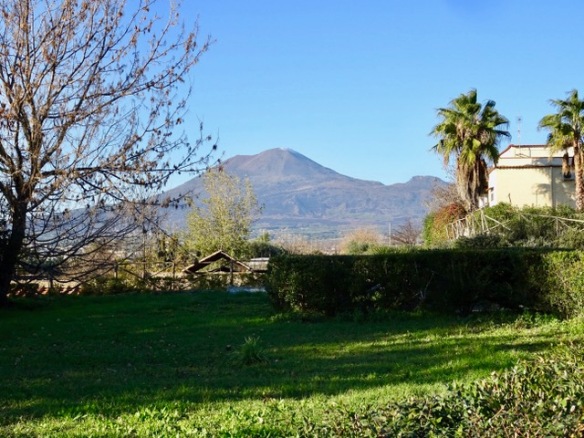 As we leave the archeological area there are several large outdoor rooms filled with amphoras and other pieces of archeological finds.  In the midst of these there are some more body casts. I think it seems disrespectful to see them displayed this way.

The sun is setting and the light rakes across the ruins… 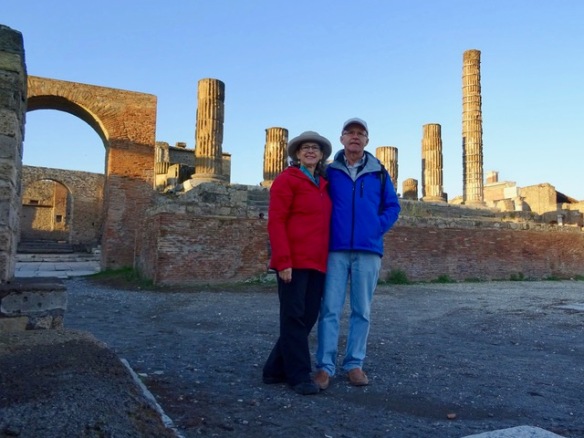 giving everything a golden glow.

There is a bookstore and museum near the far entrance so we have look around before heading back through the park towards the entrance near our apartment. There are more body casts here. It is a strange feeling looking into the faces of people who died almost 2,000 years ago. 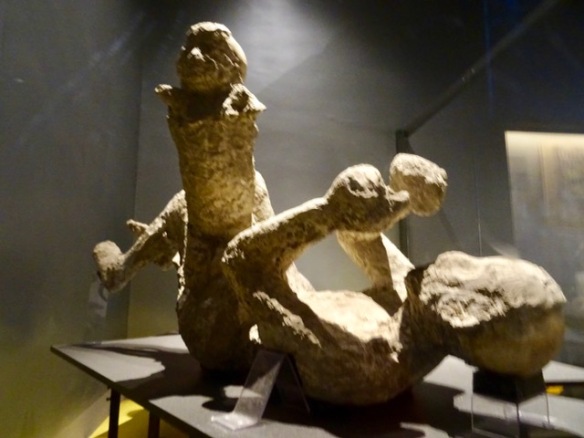 We walk through another necropolis on the way back to where we started our day.

When we exit we notice that there is a building with even more body casts on display that we missed seeing this morning. 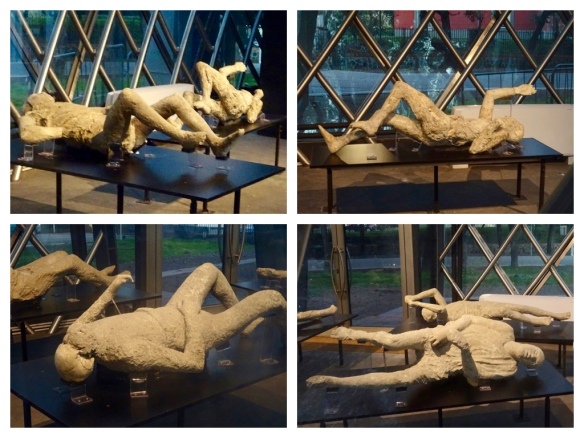 Again I have the feeling that there is something not quite right about how these are displayed, but I don’t really know what would be a better way of doing it.