We are driving to Krakow today and stop to visit Olomouc on the way. We find parking easily, which is always nice, and walk to the town square. One of the first buildings we pass has this charming little still life on a window sill. I wonder who put it there and how many people passing by notice and appreciate the effort? 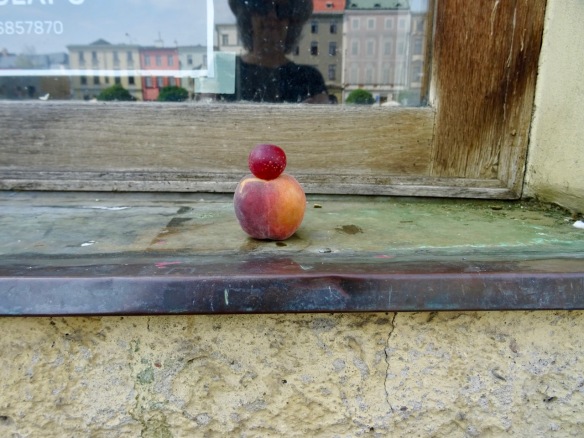 We are amazed at how huge the town square is. There aren’t very many people around but we imagine that in the peak tourist months it is probably much busier.

Bob gets a couple pastries at the first bakery and we sit on a bench to eat them and watch the people walking by. It is hot again today, 29°.  I have heard that European flours are often tolerated by people with gluten sensitivities, so I have a couple bites.

Doesn’t everyone want to ride on a turtle? I almost went right over backwards when I climbed on!

The Holy Trinity Column dominates the town square. “The column is dominated by gilded copper sculptures of the Holy Trinity accompanied by the archangel Gabriel on the top and the assumption of the Virgin beneath it. The base of the column, in three levels, is surrounded by 18 more stone sculptures of saints and 14 reliefs.” ~wikipedia. It even has a small chapel in the base. 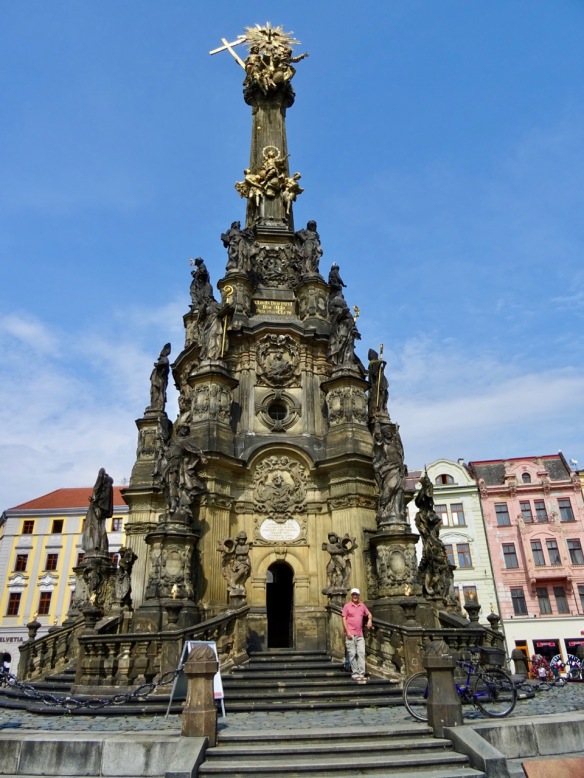 I said I want a flower column like this in my yard! 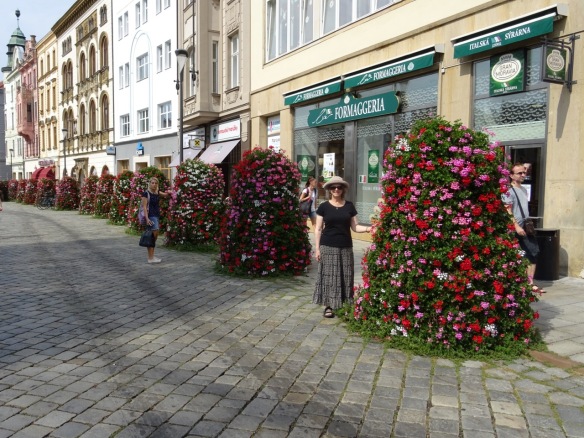 We wonder what this shop sells? These figures were made out of straw. It was closed so we couldn’t go in to find out.

We climb another bell tower in the Church of St. Michael just off the square. There wasn’t any place to see outside and get a view over the city, which was too bad.

The same church had steps to a crypt so we went to explore,..

and we found this little shrine and a small pool of water.

These ladies caught my eye. 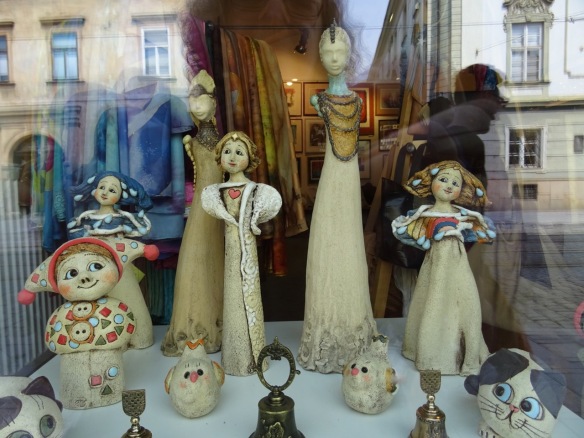 St. Wenceslas Cathedral was originally built in 1131 and was rebuilt in the second half of the 13th century. The facade was renovated in 1999-2008. It is very impressive.

Of course the interior is just as impressive.

We visit Archdiocese Museum which is much more interesting than I had anticipated. It is only $3 Cad each and we probably spent a couple hours exploring. Each room was closed off by a door which was opened by an ‘older’ woman who then made sure that we saw every exhibit that was discussed on our audio guides. They opened and closed doors behind us, which was actually very helpful as it wasn’t easy to figure out which doors we were supposed to go through. I love the statues and paintings of the Virgin Mary. There is something very appealing about the way the artists depicted their faces.

More fountains in the town square as we make our way back to our car.

This bar catches my eye. I am sure I know this name and look it up. Sure enough, it is the name of a show on Netflix about a gang in England in the early 1900’s.

When we cross the border into Poland we are surprised that there is no indication that we were leaving one country and entering another.  One of the interesting things about travelling is how different things are from home. Sometimes the differences are challenging and sometimes the differences make me smile. This is what I saw in the first bathroom I entered in Poland.

Bridges on the highway into Poland are certainly different.

We were frustrated when our SIM card stops working once we cross the border. We were told it would work in all the countries we were visiting. We finally find a MacDonalds so we can contact our bnb host, who is waiting to hear from us. It is late when we finally make it to our new apartment, which wasn’t very easy to find in the dark, but we are here, and tomorrow will be a rest day for us.

4 thoughts on “Olomouc, Czech Republic on the way to Krakow, Poland”