I realized that I forgot to put a link to our apartment in Wroclaw so here it is for those of you who are curious about the apartments we are staying in. Yesterday I started not feeling very well with a bit of a sore throat and a very tight chest. We had planned on going to the zoo today but it is cool and raining so we decide to take little road trip instead. I didn’thave the energy to walk around a zoo in the rain today. The smaller highways are often lined with trees which I think are very picturesque. 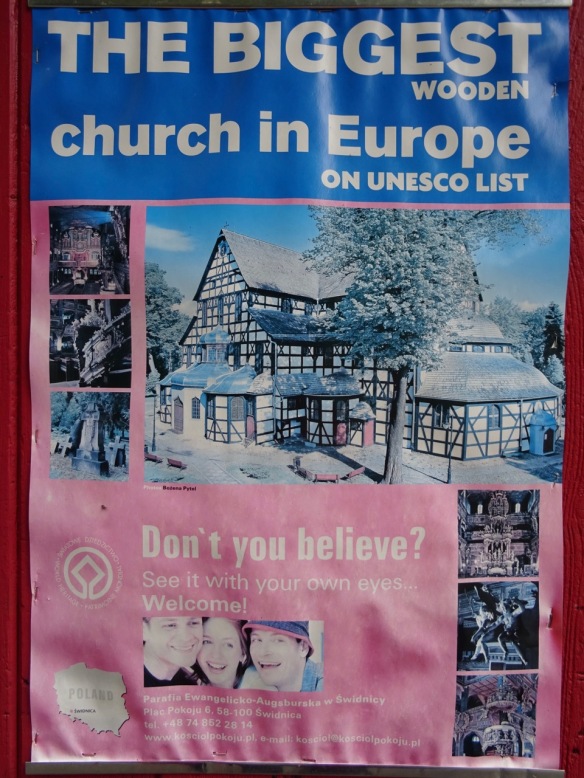 A Unesco World Heritage site, the Lutheran Church of Peace in Swidnica was built in the mid-17th century and can hold up to 7,500 people. It was built without any nails.

“The Church of Peace was founded by virtue of the Peace of Westphalia which ended the Thirty Years’ War (1618-1648). Before the war, the townsfolk of Świdnica were free to follow Luther’s ideas and Lutheran services were held in the town. When the war broke out, the Protestants were deprived of the right to have their own faith and their own churches.

However under the Peace of Westphalia, the Catholic emperor Ferdinand III of Habsburg was obliged by the Swedish to allow the Protestants… to build one so-called Church of Peace in each duchy.

The consent of the Habsburgs had many severe restrictions – the Protestants could only build their place of worship outside the town walls, it could not have any towers nor a belfry, and it could only be built from non-durable materials like wood, sand, straw, or clay. The building could not look like a church and the construction works could not last longer than a year.

Against all odds, the Protestants at the time displayed extraordinary resourcefulness. Even the poorest of the community brought something to the table, if only one wooden board. All social classes were involved in the construction process – the nobility, the burghers and the peasants.

The hard work paid off, as construction was completed on time and in 1657 the first service was held in the Church of Peace in Świdnica.” ~tourspoland.com 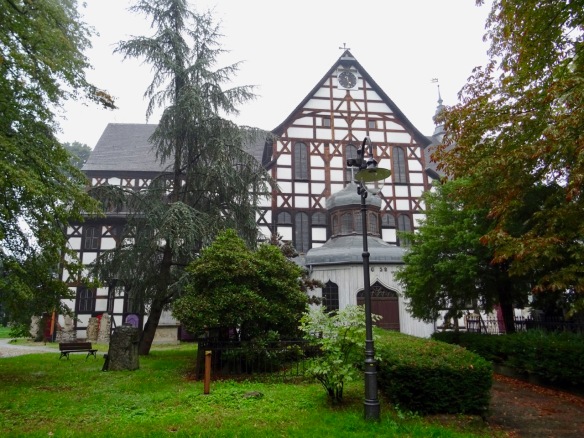 We walked into this church and we were amazed at the size and ornateness of the interior. This photo is looking towards the altar. The walls and ceilings are decorated with painted panels added after the construction of the church was completed in 1657. 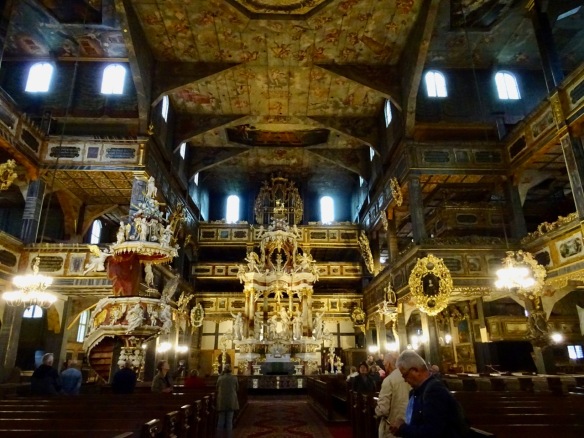 The back wall with the organ.

A view of one of the sides of the church with it’s two tiers of balconies. The spaces between the wall timbers were filled with clay and wattle.

The pulpit is extremely ornate.

A view of part of the painted ceiling.

I loved the old pews with their carved backs and worn seats.

There is a cemetery surrounding the church. 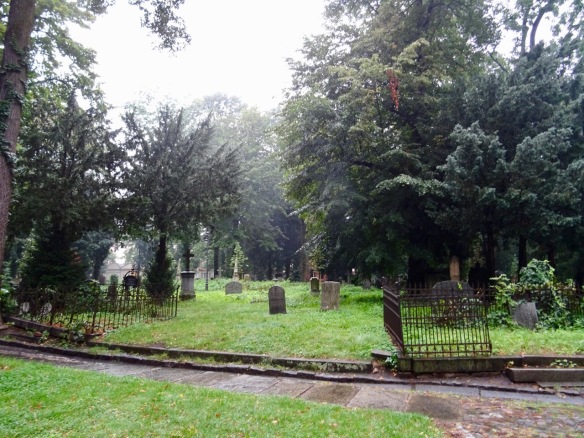 As we walked back to our car we passed this interesting door. Makes me curious about who lives here.

Next stop on our day trip is the Książ Castle, the third largest castle in Poland which dates from the 13th century.

One of the the views from inside the castle.

The entrance buildings and front grounds of the castle.

An old photo showing the castle atop an impressive rock cliff. It has been destroyed and rebuilt and expanded various times and in different styles (from Gothic to Baroque and neo-Classical). The latest family to reside there, was the Hochberg family, one of the richest and most influential families in Prussia. In the 14th century they transformed the original defensive castle into one of the most beautiful residences in this part of  Europe. The Hochbergs lived there for many generations, until 1941, when it was confiscated by the Nazis.

Bob caught my reflection in this old mirror.

The Black Courtyard is decorated with the coats of arms of the castles many owners.

We walked through many halls, some simple… 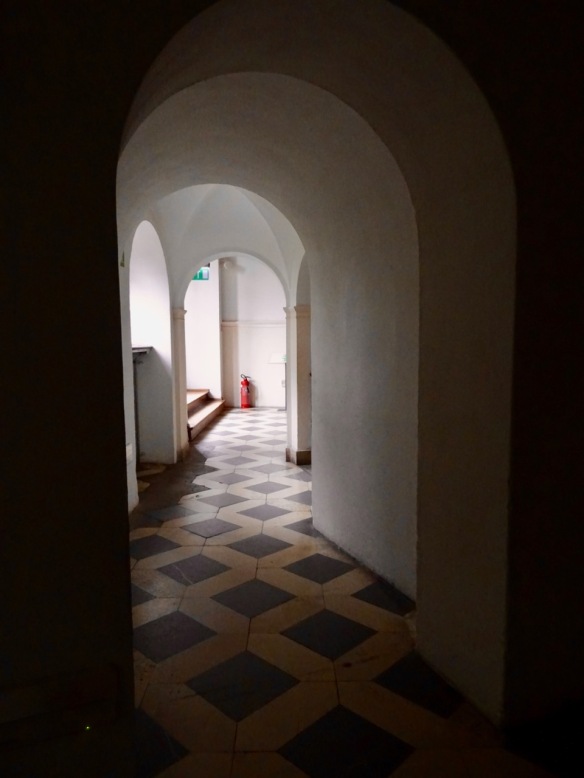 and some very ornate. I suppose a castle with over 400 rooms needs lots of hallways and stairs, and we did climb lots of stairs.

Another view out one of the castle windows of the Chestnut Terrace with four large chestnut trees.

As always, we must remember to look up. So many of the ceilings are ornately decorated. 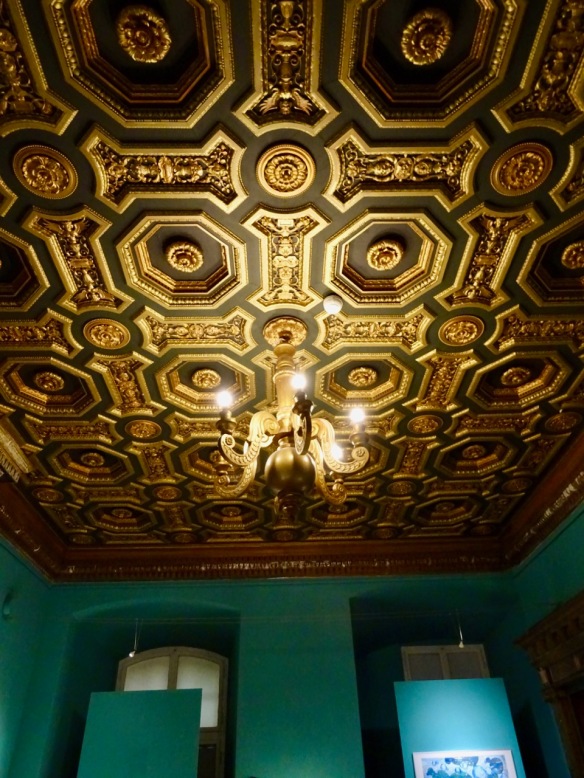 There was an exhibit of blown glass in some of the rooms and another view down one of the many hallways. 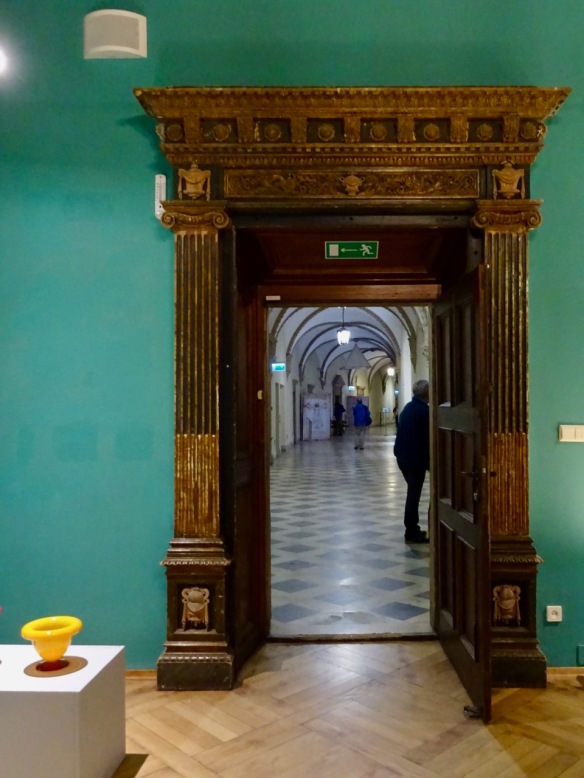 We weren’t able to see the Last Supper when we were in Italy two years ago (we didn’t know you had to buy tickets far in advance) but there is a Da Vinci exhibit here in the castle with a replica. Not as good as the real thing but interesting none the less.

There were replicas of many of Da Vinci’s paintings, including the Mona Lisa, and models of some of his inventions.

Looking out one of the windows we get an idea of some of the renovations and reconstruction that has taken place over the centuries. It is quite a convoluted building. 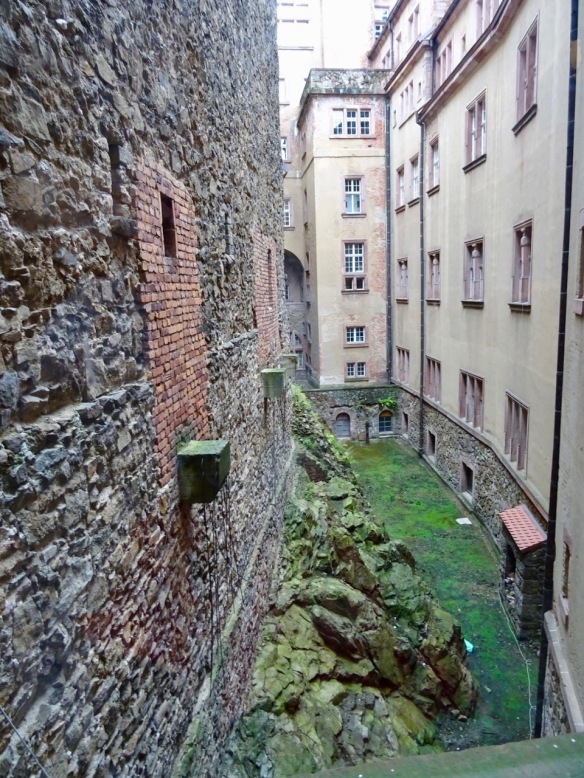 One of the restored and decorated rooms. The Nazis stripped the castle of its furnishings and paintings and it is just now being restored.

A photo showing a much more elaborately decorated room than we see today.

And what castle would be complete without a Japanese influenced room. They were very popular. 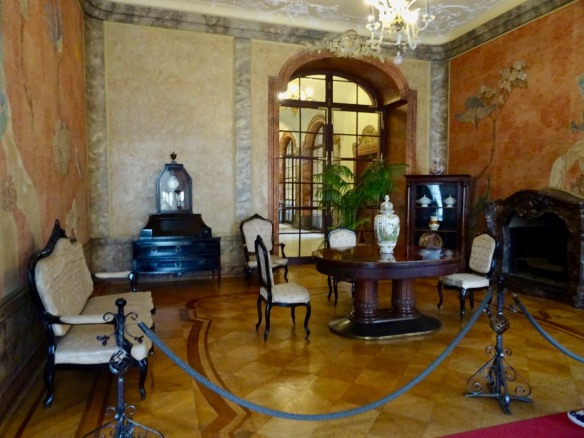 “The castle became an important part of the Riese Project, for the Nazis. It was an elaborate plan to create an underground military industrial complex complete with tunnels, roads, rail links and subterranean arms factories. The castle itself is said to have been prepared as the new headquarters for Hitler. For this purpose, thousands of prisoners, many from concentration camps like Auschwitz, were used as slave labour. Towards the end of the war, with the Red Army approaching fast, the Nazis destroyed much of the complex. The destruction continued when the Red Army ousted the Nazis. The Nazis’ exact plans with the castle remain a mystery. Were they building a secret weapon? Did Hitler plan to use the castle as a personal bunker? Little is also known of the fate of the prisoners who built the underground complex, though one can only guess.” ~ Velvet Escape.com. It is thought that valuable works of art and other treasures may still be hidden underground in these tunnels. This a model of the underground tunnels. It is possible to tour the tunnels but we did not have time, or the energy to do that today,

As we finish the tour of the castle, we are led out to the gardens and terraces surrounding the castle.

The grounds are beautifully maintained.

An interesting view of the castle.

We have no idea what all these small arched nooks with their iron grates are.

As we walk back to our car we pass a pond with blooming water lilies.

3 thoughts on “The Largest Wooden Church in Europe and Książ Castle, Poland”