Our day starts back at the Brandenburg gate. 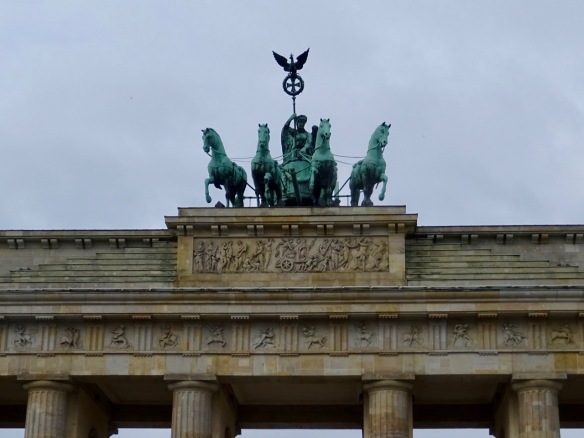 The gate is a popular gathering point for tourists. This fellow was dressed interestingly, turns out he is Austria’s Mr. Fetish 2019! 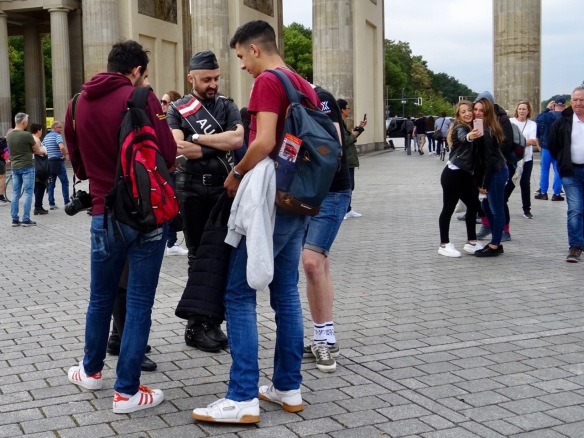 We walk to the Reichstag Building which houses the German Parliament. We are required to show passports and go through security screening before we are allowed into the building.  After riding an elevator with 30 other people we arrive at the dome. Can you find us in the reflections?

Admission to the dome is free, but we needed to register for tickets three days in advance. 6,000 people visit here every day. We walk up a 230 meter ramp and our audioguide provides a lot of interesting information about the dome, the German parliament and what we see outside the dome.

A view of the 368 meter high TV tower we walked by yesterday. It is the tallest tower in the European Union.The greenish domes beside it belong to the Berlin Cathedral, which is Berlin’s largest church.

Looking down from the ramp.  The 360 mirrors on this column reflect light down into the parliamentary chambers below the dome.

A view of the Sony Building where the giant giraffe was located. The yellow building is the Berlin Philharmonic which is said to have one of the best orchestras in the world.

At the top of the dome is a 10 meter diameter opening which provides fresh air.  Rain falls through it into the cone and is recycled. The warmth of the stale air rising in the dome is recovered by this cone and used to heat the building, along with 300 square metres of solar panels. The dome is 40 metres wide and opening at the top is 54 metres off the ground. It is very impressive.

The sky is getting very dark outside and the wind has picked up.  I think we might get wet!

If you look at the square in front of the lady in black pants in this picture you might be able to make out the members of Parliament sitting below the dome. They look like little whitish spots.

Here is a close up. 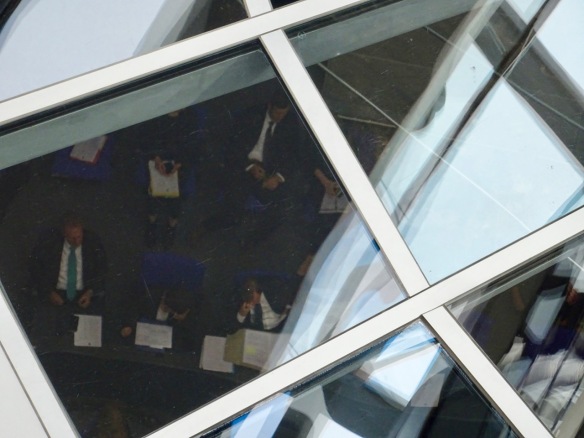 This photo of a photo shows what the Parliamentary chamber looks like lit by mirrors in the dome above. You can also see the emblem of the German government on the wall. Interestingly it is an eagle, which is the same as the national emblem of the United States.

A view towards the Brandenburg gate and the Jewish Memorial which is the grey area beside the white building.

Walking down from the top of the dome, we are on a ramp which is in-between the up ramp.  You can see people walking in different directions, some going up, some going down.

It is cold and wet when we get outside. The inscription reads “The German People”

We pass this building under construction. The inside is completely gutted.  A new modern interior will be built but the exterior will be preserved. We see other buildings undergoing this process. We walk to one of the nearby train stations to find a place to eat a late lunch and we are pleasantly surprised to find the sun is shining when we come back outside.

The Memorial to the Murdered Jews of Europe is a 19,000 square metre site covered with 2,711 grey concrete slabs, or stelae ranging in height from 8″ to 15′. It is situated on part of  the former Berlin Wall Death Strip.

There are 54 x 87 rows of these 7′ x 3′ long stelae, and the ground between rows is uneven and undulating.  There is an information centre with displays and a list of names of 3,000,000 of the Jews who were killed in the Holocaust but we did not go inside.  This is a sombre place, but something seems missing. The walls of names of the Holocaust victims that we saw at Auschwitz had a stronger impact on me than this memorial site. 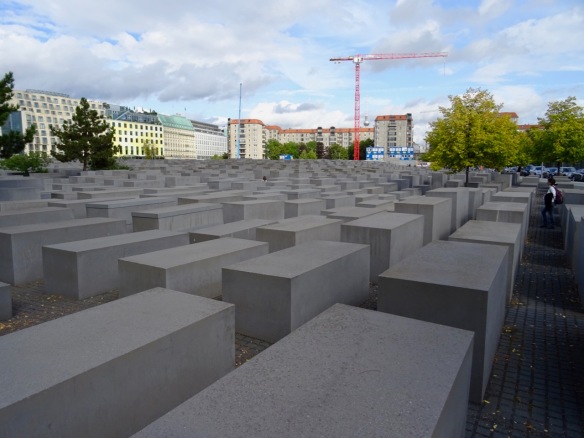 Walking towards Checkpoint Charlie we pass some of the many electric scooters that are scattered around the city. People ride these in on sidewalks and in traffic, sometimes two people on a single scooter!  Seems kind of dangerous to me and the busses honk their horns at them all the time!

A photo on a street display showing the Berlin Wall and the Death Strip near the Reichstag Building .

We stop for a rest at Checkpoint Charlie Beach!

Where Bob tries a very strange hotdog, filled with mashed potato and lettuce. He said it wasn’t very good.

A photo on the street of Checkpoint Charlie during a military standoff with the Soviets in 1961.

This checkpoint grew in stature over the years. This photo is from 1989. 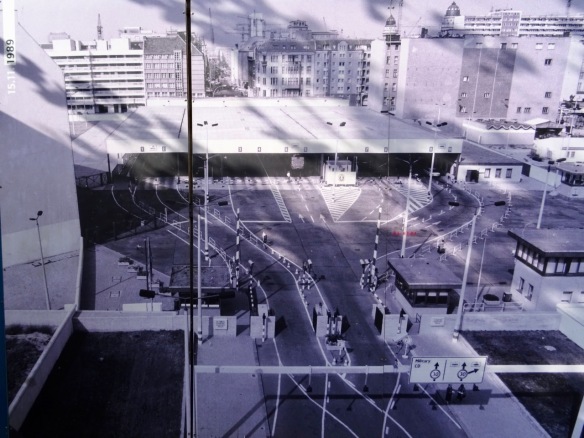 We come across pieces of the Berlin Wall in several locations along our route today.

Checkpoint Charlie from the Soviet side, looking to the American side…

and from the American side looking toward the Soviet side. 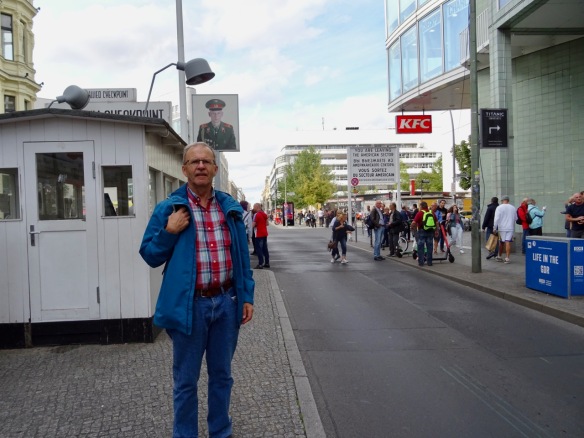 After all the heavy stuff we saw today we have to laugh as this vehicle full of very loud beer drinking young men goes down the street!  It is powered by the peddling of the drinkers onboard.

A interesting building on our way to the metro station. This interesting link shows 14 Cold War images and how these locations have changed today. 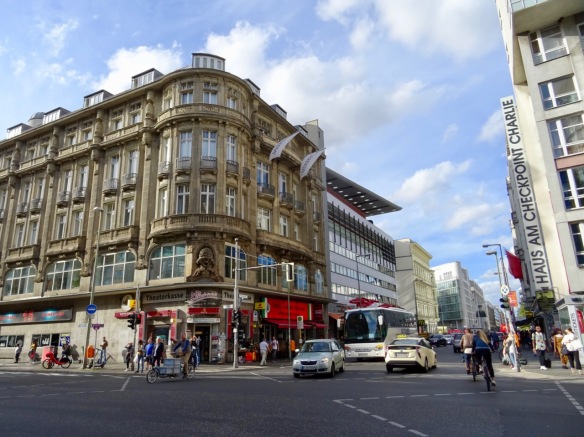 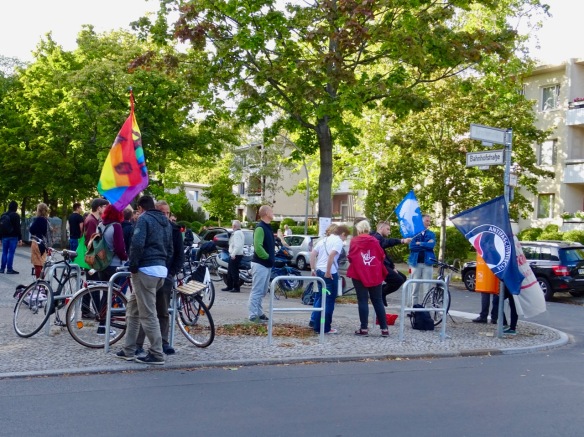 This is one of the tiniest cars I have ever seen. it only holds one passenger.

2 thoughts on “The Reichstag Building Dome, The Memorial to the Murdered Jews of Europe and Checkpoint Charlie”