We are going to visit the Berlin Dom today and climb the dome for a view of the city, then head home. An easy day is in order.

However, we wondered what was going on when the metro didn’t stop at the Brandenburg Gate Station. When we got off at the next station this is what we saw…people marching for as far as we could see to protest climate change  Many of the roads downtown are blocked to traffic.

We stand and watch for a while… and then decide that we need to take part so we joined the protestors. Here is a short video of us marching.  It was an amazing experience to be part of this march. There are lots of children here.  We think that schools must have closed for the day, as there are many groups of school children marching with banners. There are older people, grandparents with their grandchildren, mothers with babies, families, lots of teenagers and young adults.  It gave me hope that maybe, just maybe people are paying attention to what we are doing to our world.  It was a very emotional experience. 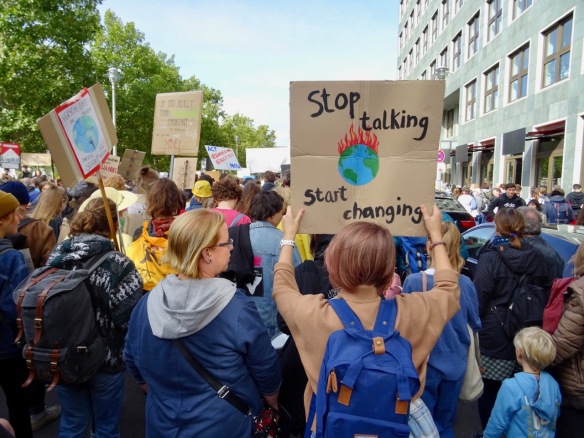 The march is going in the opposite direction, away from the Berlin Dom, so we step to the sidewalk and spend the next hour watching the people march by.  Imagine crowds like in the pictures below walking by steadily for more than an hour, and there was still no end in sight. We think that there has to be more than 100,000 people protesting here, people of all ages, and ethnicities. Here is another short video that gives an idea of the enthusiasm and passion of these protestors. The protest march continued but we thought we better go do the last bit of our sightseeing in Berlin. The Central Memorial of the Federal Republic of Germany for the Victims of War and Dictatorship below held just one piece of sculpture, Käthe Kollwitz’s famous ‘Mother with Dead Son’, created in 1938.

It has quite an impact, all alone in this big stark space.  I discover there is a Käthe Kollwitz museum, but it is not nearby and we have run out of time in Berlin.  Too bad, I love her drawings and would have liked to have seen them.

Just across the street we see a very colourful exhibit and head over to find out what it is…7,000 pompoms that form a ‘Wall of Love” installation.

Right across from the pompoms is this absolutely enormous Platane tree.  I think this is the same kind of tree that is on the boulevards by our apartment.  It has a  30 metres spread!

Bob wanted to find the plaque in a nearby square where the Nazis burned 25,000 books in 1933. There is also a clear glass panel that looks down below the square onto a room filled with empty bookcases.  The glass was too cloudy to get a photo.

Walking toward the Berlin Dom we pass the park we had our picnic lunch a few days ago.  There is no grass, only a packed gravel surface.  The parks in European cities are used by so many people that grass would not survive.

Finally we arrive at the Berlin Dom, much later than we had planned.

This is a Protestant church that is every bit as ornate as the Catholic Churches we have visited in Europe.

The dome above the altar is magnificent.  The Church was hit by a napalm bomb in the Second World War and the dome collapsed into the church. It was open to the elements for many years before it was finally restored to its former glory.

This photo shows the bombed Berlin Dom. I had no idea how badly bombed Berlin was before we visited here.  This link shows some pictures of the damage. It must have seemed an impossible task to think of rebuilding such devastation. 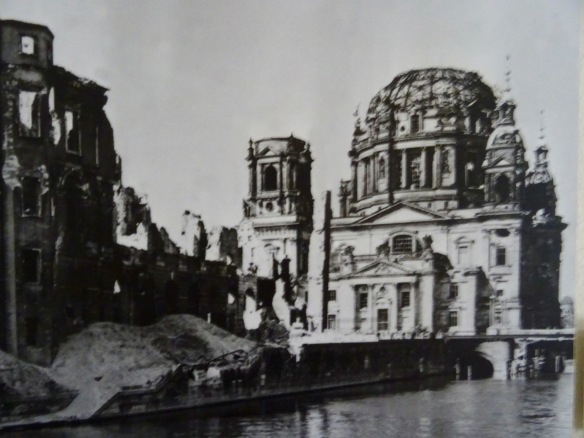 This is where we are climbing to.

The 367 steps were worth it!  Here are some of the views from the dome.

We can hear music from way up here. Turns out it is this fellow far below. 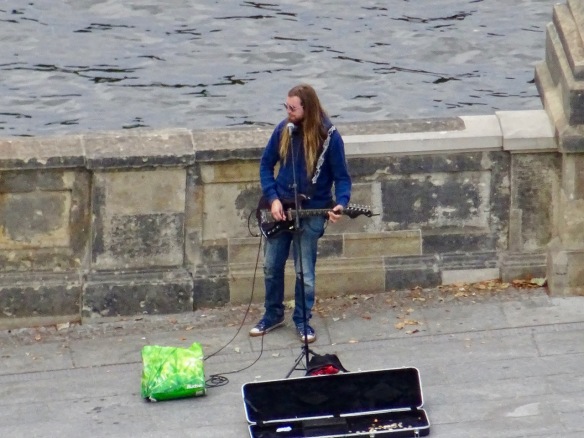 He is the person on the left side of this bridge with a guitar case on the ground in front of him.  I even zoomed in a bit to take this photo.  It was surprising how clearly we could hear all the words of his song. 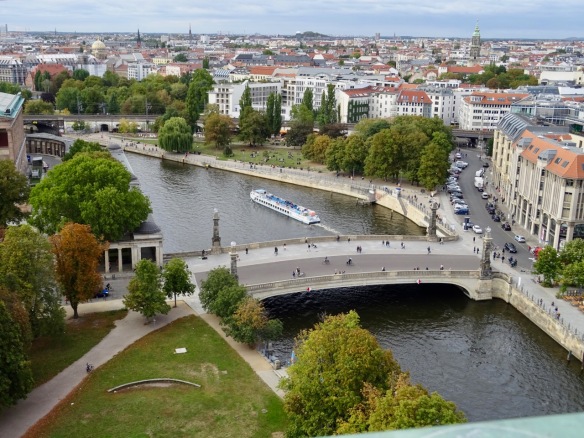 The park area in front of the Berlin Dom and the Altes Museum.

Bob is getting to be quite the photographer. 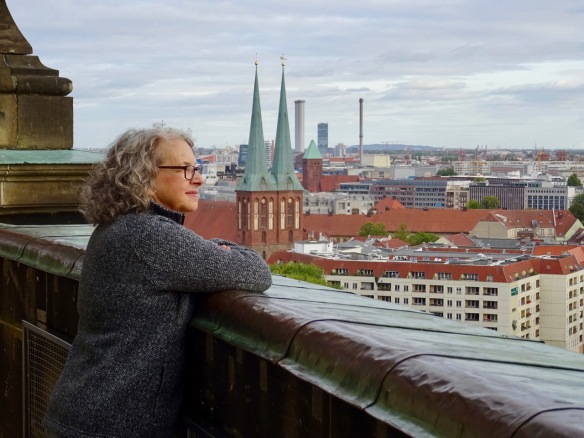 Looking down some of the stairs we climbed.  At least they were good sturdy stairs, unlike some of the rickety belltower ones we have climbed in the past. 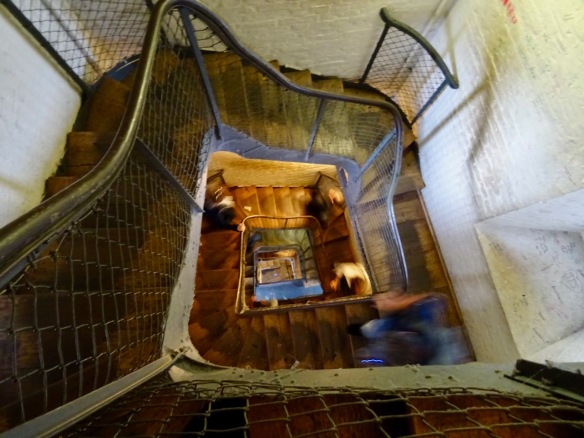 Part way down there is a small museum with models of the church. The plaster and wooden models used to build the original church were used in the reconstruction of the church after it was bombed.

We were way up there walking along the outside of the rectangular windows.

We weren’t sure if the buses were running after the protest march, so we walked back along the river towards the metro station On the way we see this parade of boats. 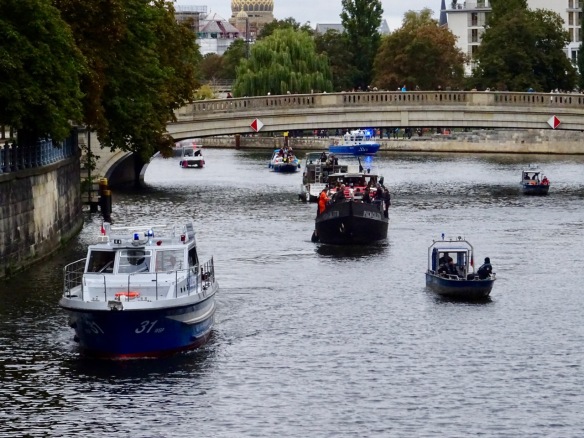 Turns out is is another protest “march” with lots of music and dancing.  Take a look at the back of the boat in the second photo.  We wondered if it was about to sink, it was so low in the water.

There were all sorts of spectators watching the boats. 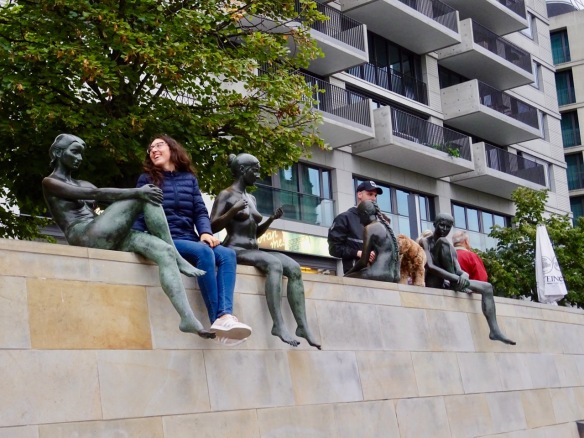 There are lots of beautiful big trees in Berlin.

Just before we get to the metro we pass a store with hundreds of old sewing machines lining its windows.  Kind of neat reflections too.  It was a much longer day than we expected but I was so glad we got to see and take part, even for a bit, in the Climate March.  When we get home we discover that there were marches like this all around the world!  YAY!!  Finally people are realizing that we need to change the way we live.

4 thoughts on “Berlin Climate Protest March and the Berlin Dom”