The Leopold Museum has the largest collection of Egon Schiele’s work in Vienna as well as several of Gustav Klimt’s works.

Egon Schiele was an Austrian painter. His work is noted for its intensity and its raw sexuality.  Schiele completed many self portraits, including naked self portraits.  I  am intrigued by Shiele’s drawings and was looking forward to seeing his work.  Unfortunately exhibited works on paper are facsimiles, because the actual drawings and watercolours would be damaged by continual exhibit.  They are very good facsimiles, but not the real thing.  It would be nice to look closely at some of his original drawings and watercolour paintings.  I guess I will have to hope to one day visit a special Schiele exhibit, similar to the Dürer one I saw yesterday, in order to see his original work.
‘Chrysanthmemen’ was a painting I hadn’t seen before.

Two of Schiele’s naked self-portraits. the first is an oil and the second gouache and black chalk on paper, so it is a facsimile.  These are both larger than I had thought.  The oil painting is 1.5 m x1.5 m and the gouache 63 x 44 cm.

I have decided that I like Schiele’s figurative watercolours and drawings more than his figurative oils.

The commentary for ‘Small Tree in Autumn’ says that the trunk and branch on the right look like human legs, while the branches of the treetop resemble arms.  I never saw that before and now it is all I can see!  I even see a head just below the arms.

These two long narrow oils are not what I think of as typical Schiele paintings but I like both of them.

‘Mother and Child’ is a well known painting.  I do love how expressive Schiele’s hands are.

Schiele’s 1912 ‘Self Portrait with Chinese Lanterns’ was painted as a companion piece for the ‘Portrait of Wally Neuzil’ who was his muse and partner from 1911 to 1915.  Both these paintings have a gentleness and sensitivity not found in all his work.  I like these very much.

Quite different from this self portrait completed the same year.  Schiele was born in 1890 and died in 1918.  He was only 28 years old when he died, yet he created over 3,000 works on paper and around 300 paintings!  I wonder what he would have accomplished if he had lived longer.  He died during the Spanish Flu Epidemic, just three days after his six month pregnant wife Edith. 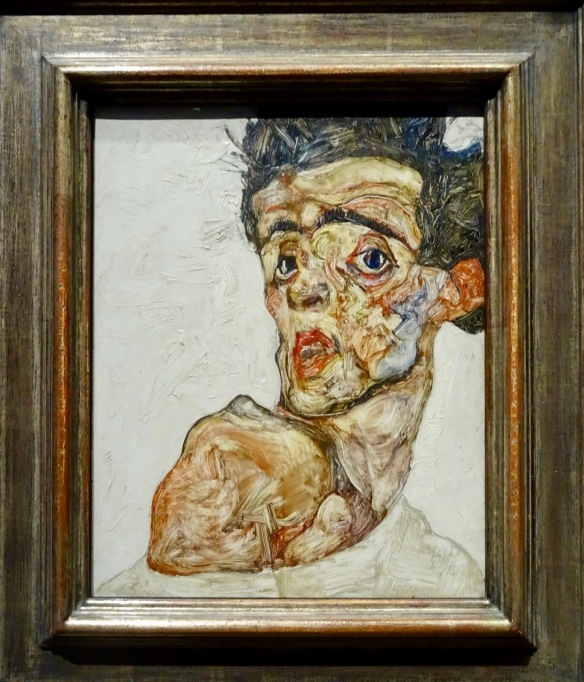 ‘Reclining Woman’ was bigger than I expected.  Originally the woman’s genitals were exposed but Schiele added the white cloth covering in order to be able to show the work at an exhibition in Vienna in 1918.

There are several landscapes, and most of them are quite large.

and ‘House With Shingled Roof’ were two that I particularly liked.  Although Schiele only painted for such a short time, his work laid the foundations for the Viennese Expressionist movement as well as inspiring other future movements, such as Abstract Impressionism.

There is a small collection of Gustav Klimt’s work. Klimt (1862-1918), was Schiele’s mentor, so it is nice to see their work exhibited together.  This ‘Head Study of a Girl from Hanā’ is thought to have been completed while Klimt was still a student.

‘Death and Life’ won the Gold Medal at the 1911 International Art Exhibition in Rome.  This painting and ‘The Kiss’, that I saw at the Belvedere,  are two of Klimt’s most well known paintings. I feel very fortunate to have seen both of them in person, as well as all the other amazing works of art I have seen on this trip.

As we are leaving the Leopold I notice this painting, which makes both of us laugh!  It is by Albert Birkle and is titled ‘Man with Fur Cap’, or ‘My Brother the Animal’!

Near the metro station Bob notices this crane which has just been erected.  Neither of us have seen one with so many arms before.

When I saw this building our first day in Vienna I thought it was the Hundertwasser House but it wasn’t.  Turns out that it was designed by Friedensreich Hundertwasser!  It is the Spittelau Incinerator which is used to handle Vienna’s garbage.  The environmentally friendly plant produces enough energy to heat more than 60,000 households in Vienna in a year. 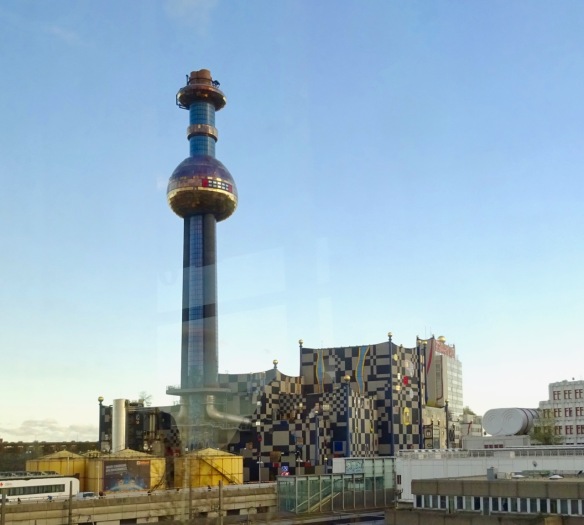 I have one more life drawing session tonight at Kaffeebar Quentin.  I have attended many life drawing sessions in bars or pubs and the model is always at least partially clothed, so I was quite surprised when our model is completely nude.  We are in the back of the bar, but the model is still in full view of all the other patrons as well as anyone who happens to look in the windows.  Wish I had a scanner, as it would improve the quality of these photos, but I don’t think I can haul one around on holidays!  These are all 5 minute poses.

and we finished the evening with a twenty-five minute pose.  The people at this session were very friendly and I had met some of them at the other two sessions this week.  I will miss Vienna, they have so many life drawing opportunities.  There is a session almost every day of the week, and lots of them have interesting themes.

4 thoughts on “The Leopold Museum, Vienna”