Merida is about half an hour from the Portuguese border, in central Spain.  It poured rain all night and most of this morning so we weren’t in a hurry to go exploring. We decided we would go to the Museo Nacional de Arte Romano, which we both really enjoyed.  It is  a beautiful building that was designed to house this collection, rather than being a converted monastery or palace, like so many museums in Europe .

Here is a close up of the sculptures and reliefs at the end of this big hall.

I really loved this huge bull from the 1st Century AD.

The museum has several very large floor mosaics on display.  I wonder how they are able to lift these off a floor and display them on a wall?  Anyone know?

Portrait sculpture was very important to the ancient Romans.  I felt like I would know these people if I met them, their portraits were so expressive.

We stayed in the museum until it closed at 4:00 and then went to visit the Amphitheatre and the Roman Theatre.  These were both amazing places.  The sunken area of the amphitheatre was once covered by a wooden floor.  I have no idea why, there are lots of things I wanted to know about, but didn’t find answers to.  Guess I need to do some research.

The view from inside a ‘room’ beside one of the entrances to the floor of the amphitheatre.

Some pictures of the area on the way to the Roman Theatre.

Merida was founded in 25 BC and was the capital of Rome’s westernmost province which was why it has all these fantastic monuments.  This Theatre wa built in 15-16 BC and is still used today in the summer for the city’s drama festival. It is hard to believe that these ruins are 2000 years old and still in such good condition.  Yes, some of it has been reconstructed but it is all still pretty amazing.

The gardens behind the stage were used as a foyer during intermissions.

We spent quite a bit of time walking around these splendid ruins but then it started to rain again so we headed home for another late supper.  Our car was parked near this pretty little courtyard. 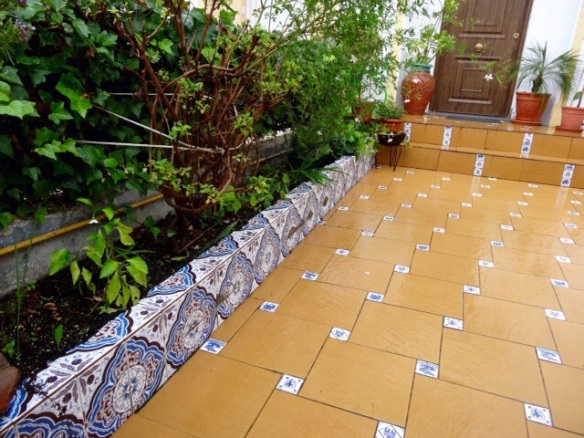