This was our Airbnb apartment near the village of Alhendin, about 20 minutes outside of Granada. It was very nice and quiet but it is time to hit the road again. We need to be in Los Alcázeres, a small coastal town in southeastern Spain by evening. 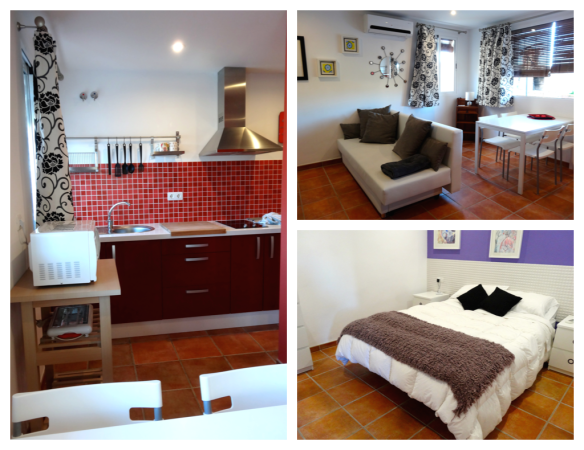 The drive is interesting as the scenery changes often.  These are photos shot through the car window so they aren’t the best, but they give a pretty good idea of the countryside. This is on the outskirts of Granada.  I find it so strange to see apartment buildings and then countryside right beside them.  There are no suburbs around here, it is city and then it is country, nothing in-between. 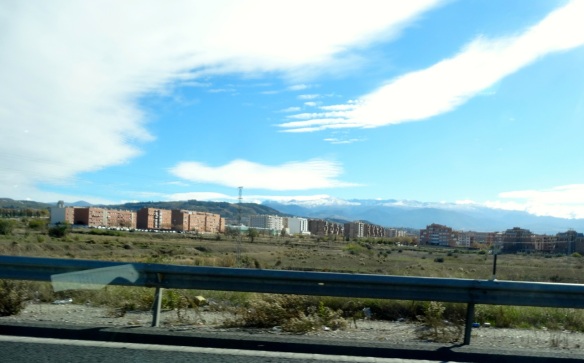 We are surprised to see snow on the mountaintops. 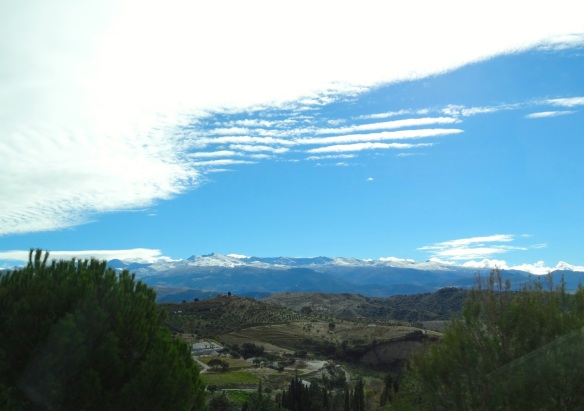 Before long there are fewer trees and the land is much more arid looking. 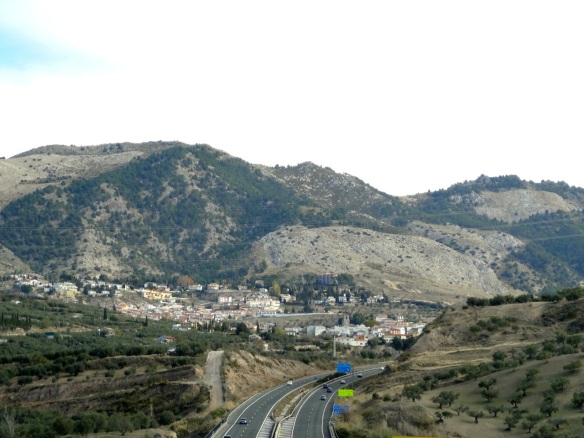 It is hard to tell from the photo, but this area is much like Drumheller, Alberta, with fields suddenly giving way to steep, dry ravines. 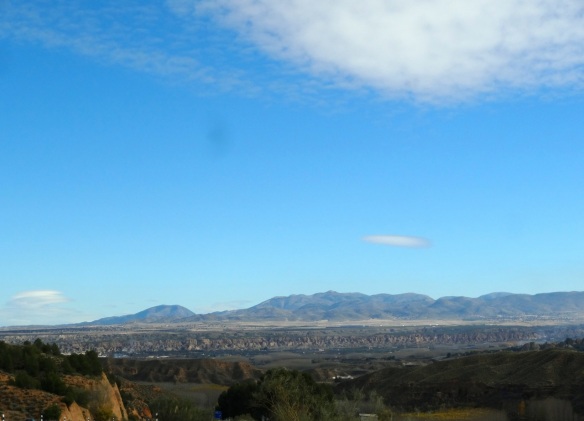 Soon we are seeing weathered and eroded hills that have what look like caves or tunnel openings. 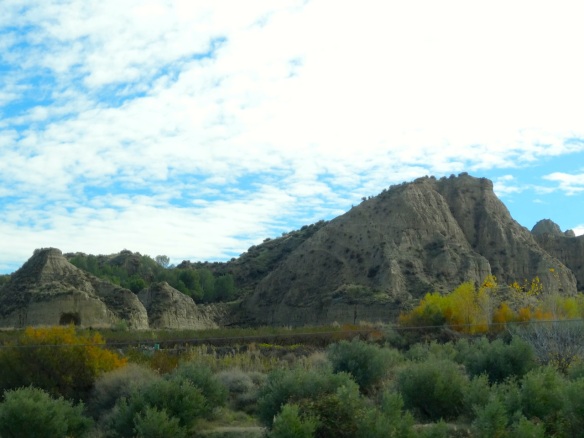 A quick bit of internet research revealed that many people in this area live in caves.  We stop in a little town named Purullena, and visit the Museo Cueva Immaculada.  This was quite the experience.  As we entered the museum we realized that we were walking through a family home.  There were footsteps painted on the floor and we were told  to follow the footsteps and then we were left to explore their house! We passed what looked like the grandparents having something to eat with their grandchildren in the dining room.  It was rather bizarre. 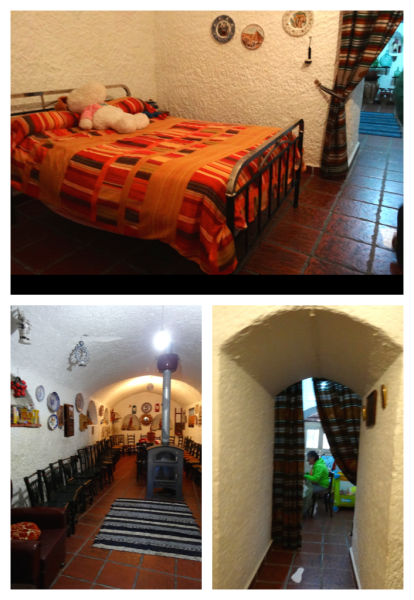 Curtains separate the rooms so that air can circulate, and there are also chimneys for air circulation. We climbed a flight of stairs to an area of their home that was set up as a museum, with old farm implements, photographs, kitchen utensils, and a whole lot of other assorted items.  Here are some pictures of the cave houses in Purullena, and another little village we drove to nearby. 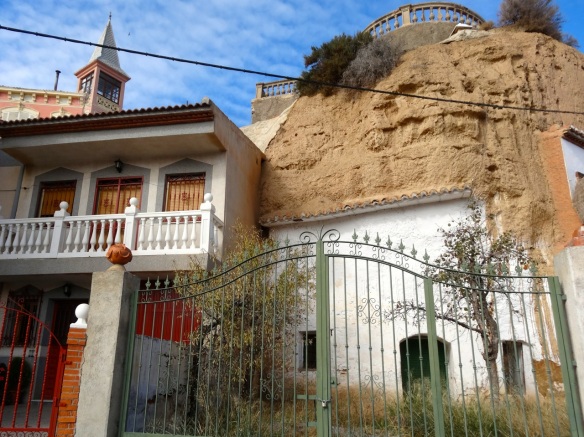 The temperature in these homes stays between 17º and 21º C year round. The ceilings are dome-shaped so that the caves will not collapse and to distribute the weight of the hills above to the thick outer side of the walls. 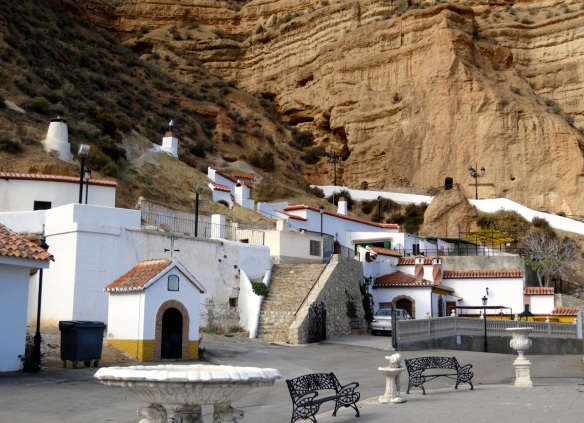 Thirty years ago everyone in the town lived in caves, and today about 1,100 of the towns population of 2,700 still live in caves.  The soil here is called arcilla, which is a special type of clay that is compact but still very soft so it is easy to dig.  It is also an impermeable soil which stops the rain from entering the cave. 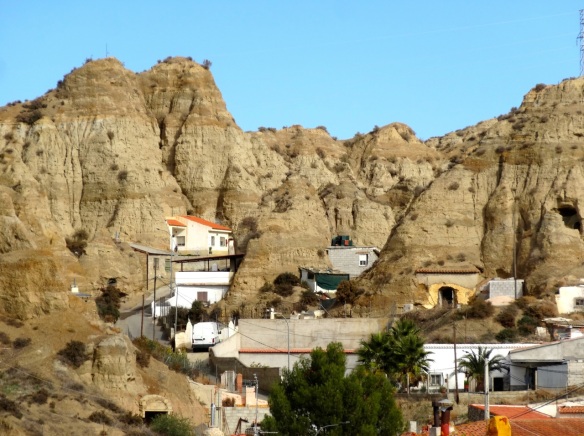 The cave homes are dug out of the mountains and there are no other construction materials used. The homes are painted with white chalk which breathes so the air can circulate, and this prevents humidity from building up in the caves. 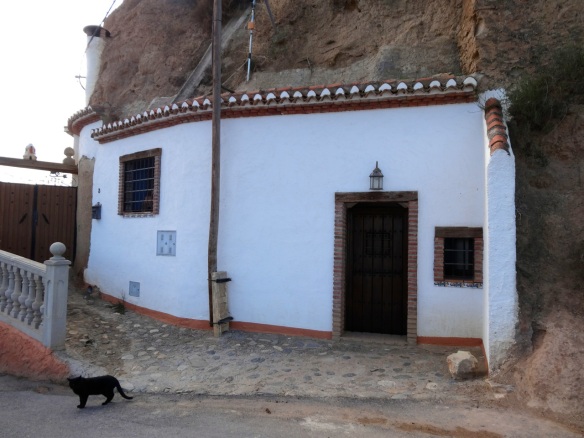 We saw this ‘troglodyte’ busily hanging up her laundry before she went back into her cave home. These cave dwellers call themselves Troglodytes, which is from two Greek words meaning hole, and dying to get into  If you want to read a bit more about these unique houses check out http://www.spain-holiday.com/blog/cave-settlements-in-andalucia.php 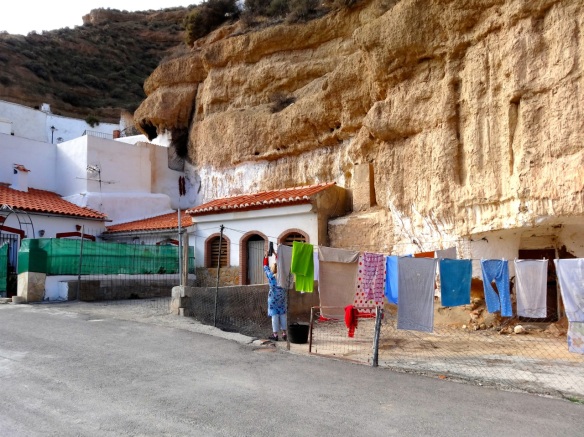 We were quite surprised to discover that the public washrooms were also the family bathrooms, complete with the family laundry, showers, kids toys and other personal items! These were located just outside the cave home, sort of like modern outhouses.  We thought it must be difficult to put plumbing inside the caves.

As we continued on our way to Los Alcázeres we passed lots of huge market gardens, many of which had these tunnel hothouses, field after field of them. It was quite the sight. 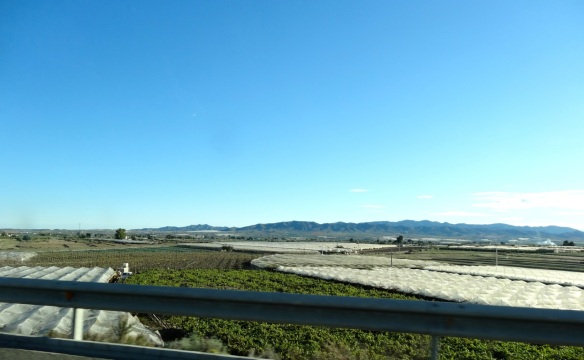