Bob went out this morning to get a few groceries and all the local shops were closed!  He finally found somewhere to buy food for our last few meals in Barcelona. We discover that today is Immaculate Conception Day, a Spanish National Holiday, and almost all the shops are closed. I had planned on shopping for a few last minute souvenirs and some sketchbooks that I really liked. No luck, so we catch the metro to Park Güell, where we spend our last day in Spain.

Our walk from the metro to the park is all uphill! Luckily there are escalators for the very steepest part of the climb.  I liked the imagery of the two nuns walking in front of all the graffiti, and the ‘tree’ is actually a drain pipe with some sculptural concrete additions. I’m glad we don’t have to park here.

Park Güell is one of the most impressive public parks in the world.  It was designed by Antonio Gaudi for Eusebi Güell and construction on a garden city started in 1900. There were to be sixty single family homes built but the project wasn’t successful and only two homes were actually completed.  One of these, Gaudi’s residence, is now a museum and the other, Güell’s residence, is now a public school. The park became the property of the city of Barcelona in 1923 after Güell died and in 1984 it was declared a UESCO World Heritage Site.

We bought our tickets in advance as there are ‘only’ 400 people admitted to the Monumental Zone of the park every half hour.  While we waited, we got some refreshments from a little shop that was built right into the rock cliff face.  We entered at the Teatre Grec, or Nature Square, which is partly dug into the mountain and partly held up by the Hypostyle Room. There is a long undulating bench in the shape of a sea serpent which surrounds three sides of this square. The back of the bench forms a balustrade and the entire bench is covered in mosaics made with coloured ceramic shards most of which came from demolition projects and discarded objects. 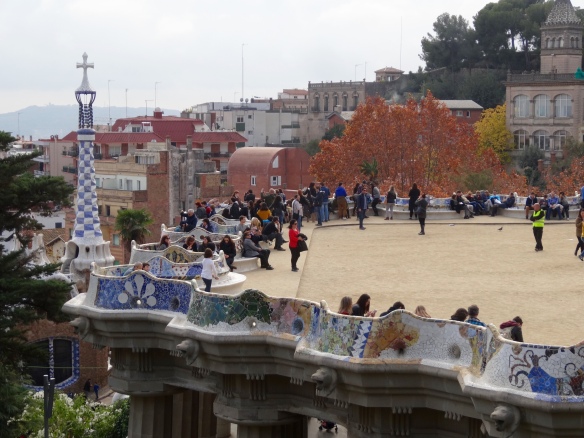 I read that Gaudi had a workman drop his pants and sit on soft plaster so that he could figure out the correct shape of the bench seat so that it would be comfortable!”

There are great views from the square, both of the main entrance with its two whimsical buildings, and of Barcelona, all the way to the Mediterranean Sea. The house on the left was the porter’s residence and the building on the right is now the gift shop. 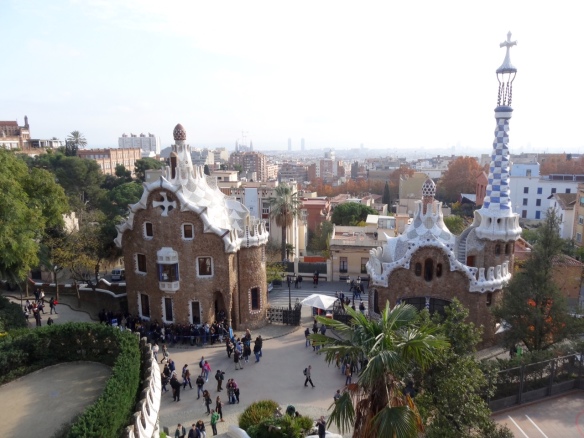 The Hypostyle Room is under the square and it is a covered space that could be used for gatherings and markets. All the columns lean a bit this way or that, none of them are perpendicular to the ground.  The columns hold up the square and rainwater collected on the square is filtered down through the columns into a cistern underneath the floor. It is quite amazing.  Notice the dog’s head decoration.

At the main entrance there is the monumental flight of steps, flanked by two convex walls decorated with more mosaics, that leads up the Hypostyle Room.

These are some of the many different, colourful mosaic tiles on these stairway walls. 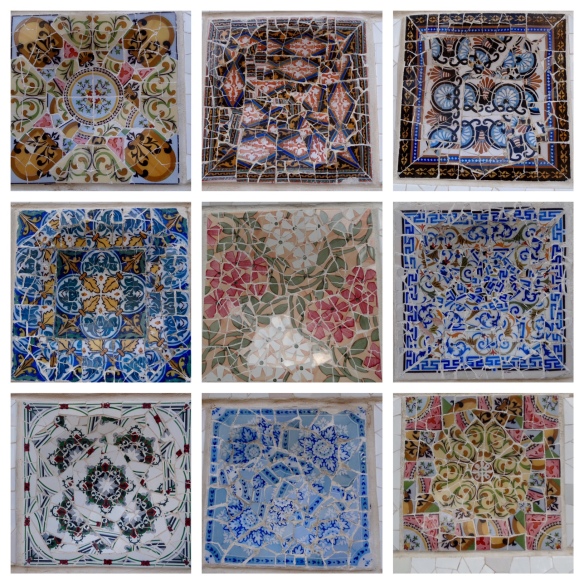 There are sculptures and three fountains on this flight of stairs but this one is the most famous. This brightly coloured salamander, or dragon, depending on what we read is a favourite of the people of Barcelona and most visitors. Everyone wants to touch it and take their picture beside, or even sitting on the salamander. There is a guard assigned specifically to prevent people from touching the salamander to prevent further damage.  Thousands and thousands of touches eventually wear away the tiles and can cause breakage. It is an impossible job as nearly everyone attempts to make some sort of contact with this creature!

We head towards Portico of the Washerwoman, which starts near the main entrance, with a spiral ramp and columns in the shape of a spiral curve that ends at a rough caryatid known as the Washerwoman because she carries a basket of washing.

This ramp takes us back to the Nature Square and we spend some more time here, enjoying the sunshine and the views, along with a bit of people watching.

On the other side of the square there is another walkway called Planters Viaduct, which we follow and end up in an interesting area with more strange leaning columns and stone chairs. This is such an incredible place!   I can only guess at the hours and hours it took to create all this and wonder at Gaudi’s incredible vision and imagination. 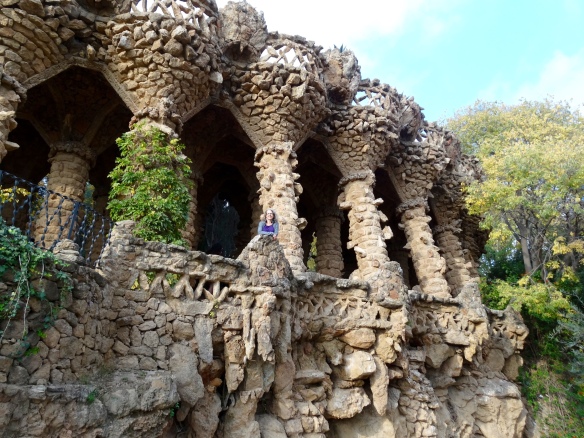 There are so many fascinating details everywhere.  It really is a visual feast and almost too much to absorb in one visit. I would have loved to draw some of this but there just isn’t enough time to see everything and draw too.

On the way back to the square we meet this rather strange fellow.

I rather reluctantly say goodbye to this wonderful place. Just outside the park gates I see a building, which appears to be unoccupied, and announce that it would make a perfect studio for me!  Oh well, I can dream, can’t I?

I love these zebras we see on the walk back to the metro. 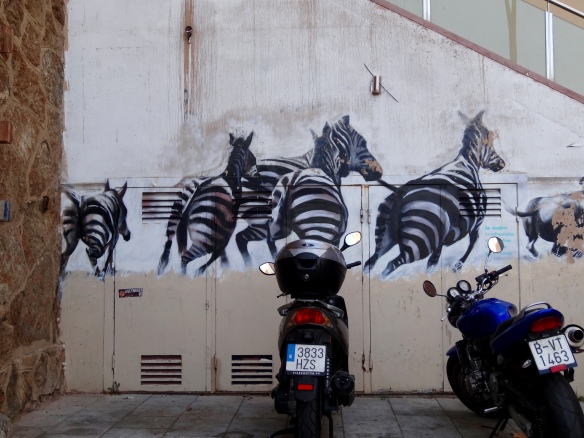 It is a good thing that we got most of our cleaning and packing finished last night as we had some unexpected excitement tonight.  The stairway in our apartment has one of those elevator chairs that run on a rail for handicapped people.  Tonight a woman was on her way down the stairs on the chair and it stopped working.  She was getting very upset and, even with Bob’s help, her husband was not able to get her out of the chair and down the stairs. Finally we suggested calling the fire department and soon they arrived. Six of these strong firefighters finally managed to get this poor lady out of her chair and safely down the stairs.  It was quite the procedure, and it meant that for almost two hours no one could go up or down the stairwell .

Finally, to bed, all packed and ready for the long flight home.