We take the metro to Potsdam to visit the Sanssouci Palace and gardens, which was the summer residence of King Frederick the Great. This is a UNESCO World Heritage site. We did not pre-book tickets, the number of visitors to the palace are limited, but we only had to wait 90 minutes to see the palace. There was lots to see in the meantime.  This great historical windmill stands at the entrance to the Palace Park.

The grounds in front of the palace.  We have our picnic lunch and then visit the Bildergalerie. 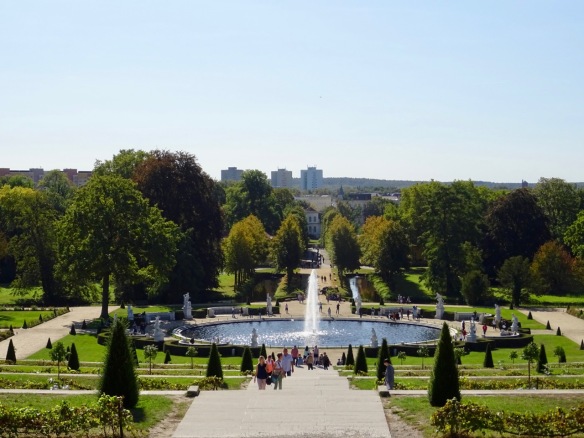 The Bildergalerie was originally an orangerie but it was converted to an art gallery for Frederick’s private collection.  The yellow marble used throughout is from old Roman ruins and is very rare and expensive. There are two long galleries…

connected by a round room with a vaulted gold ceiling. At the far end there is a room for small paintings. The last photo is taken looking out from this room.  There are a lot of beautiful paintings but they were a bit hard to see because of the glare from the windows on the opposite wall.  I am surprised that they allow the much sunlight to enter the gallery, but it did make the space bright and very attractive. We still had a bit of time before our palace visit so we walked down to the gardens.  The layout here is reminiscent of Versailles in France, only on a smaller scale.

All the terraces have these nooks with glass doors that can close when cold to protect the plants.  Frederich loved to garden and grow fruit trees and grapes. 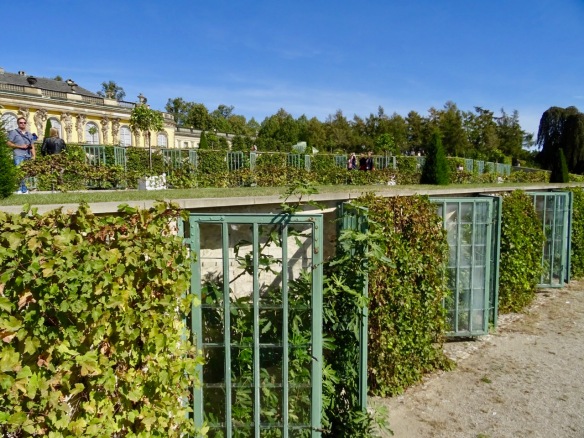 We enter the palace and take this selfie in the first  room.  It contains artwork and is an entrance hallway, not very wide at all.

The palace only contains twelve rooms. They are all connected by doors in a straight line that lead from one room to another. The room below is panelled in wood with inlaid botanical designs. They are very intricate.

We walk through the rooms, each seeming to be a bit more elaborate than the next.

The green room above was Frederick’s study.  He suffered from asthma, gout and other ailments and he often slept in the green chair below as it was too difficult to lie in a bed.  He died in this chair when he was 74.

Frederick loved nature and the palace was decorated with botanical themes.  The palace was his refuge and he lived there from April to October.  Sanssouci is from the French “sans soucci”, which means “without worry”.  Frederick was married but lived separately from his wife.  He only married because his father threatened him with imprisonment if he did not comply.  His father was very strict and made his Frederick’s life miserable.  He had a miserable childhood as his father thought him effeminate and tried to change him.  Frederick was gay and surrounded himself with male friends and companions at Sanssouci.  Women were not welcome there.  The yellow room below has raised carved decorations, and a sleeping nook for the bed, as did all the bedrooms.  Notice the spiders on the ceiling decoration.

Frederick was unable to travel to Rome and Venice but his palace had many paintings of these cities, which he greatly admired. I think how lucky we have been to visit these cities. 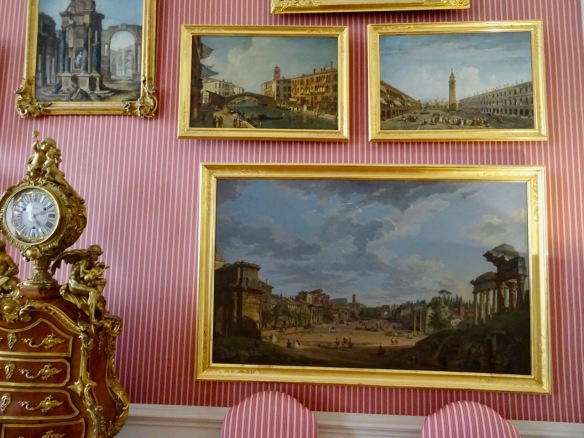 As we exit the palace there is a huge painting of Frederick the Great by Andy Warhol.  It is quite a dramatic change from the other artwork we have seen here.

We climb the interior of the windmill and step outside to check out the huge blades.

This is still a working windmill. We are amazed at the size of the wooden wheels and cogs. 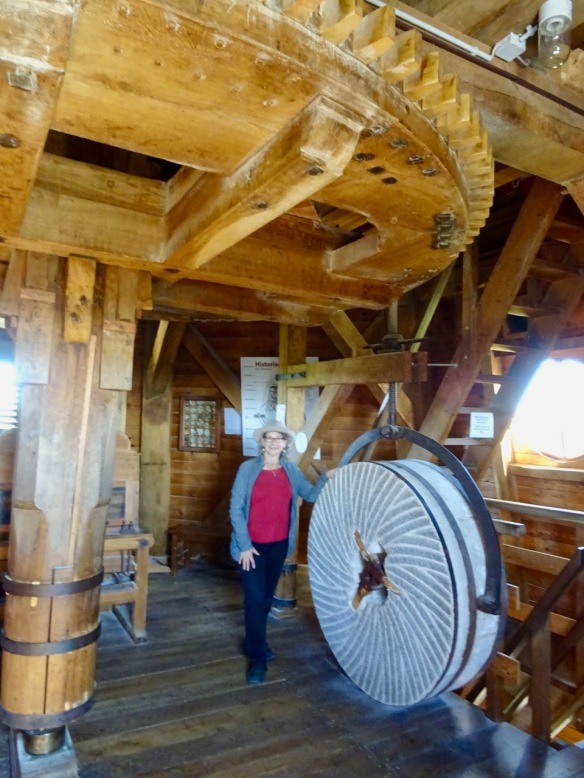 We walk through the park with its gardens and fountains towards the Orangerie. 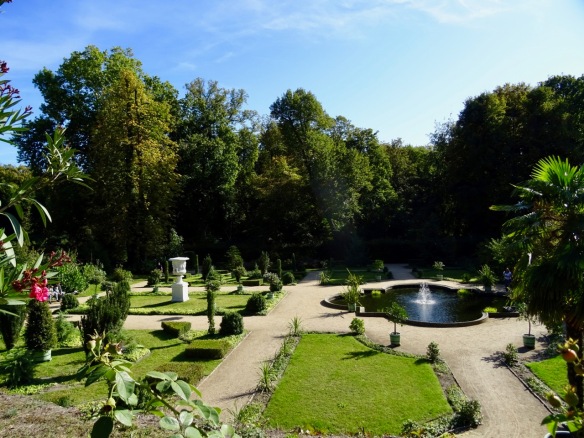 Wow!  We have never seen an orangerie this large.  It is enormous!  This photo shows one wing and the entrance behind me.  There is another wing just as long on the other side of that entrance.  This Orangerie was built by Frederich William IV in 1851-1864.  It is 300 meters long. 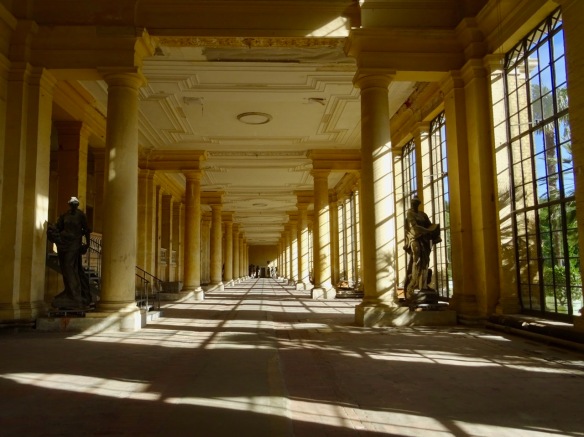 Some of the plants are huge. These large potted palms definitely need a fork lift to be moved.  No idea how they ever transplant them when needed?  The pots are almost as tall as I am!

We are surprised to find more furnished rooms and another art gallery in the Orangerie.  The Raphael Hall has over 50 copies of Renaissance paintings. 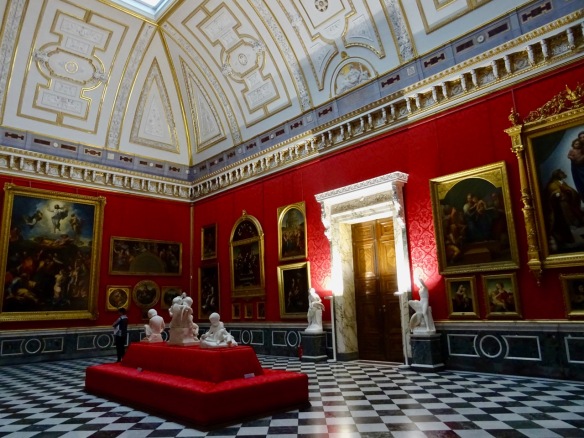 We saw the original of this painting in Italy at the Vatican.

Do you recognize the tondo by Raphael that we saw at the Gemäldegalerie earlier this week?  Interesting how copying famous artworks was such a common accepted practice.  Today I think it would be called forgery. 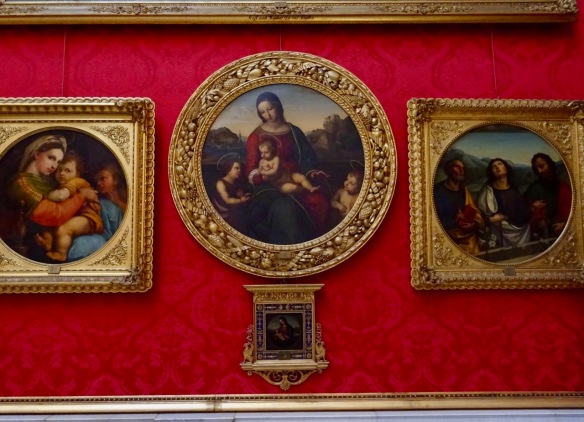 Another room in the Orangerie Palace. 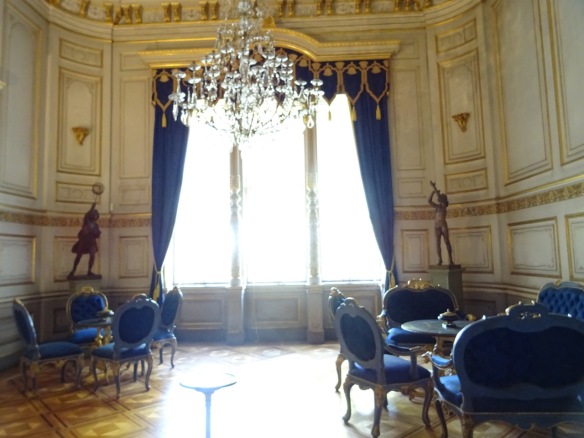 And another selfie reflection in a very ornate mirror.  Notice our big slippers! 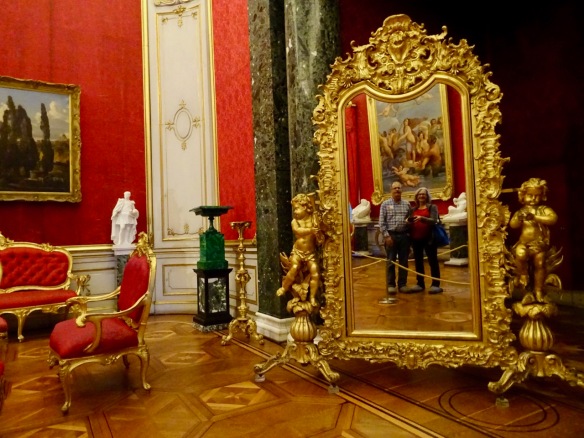 These are some of the stairs we climb to the top of the Orangerie. 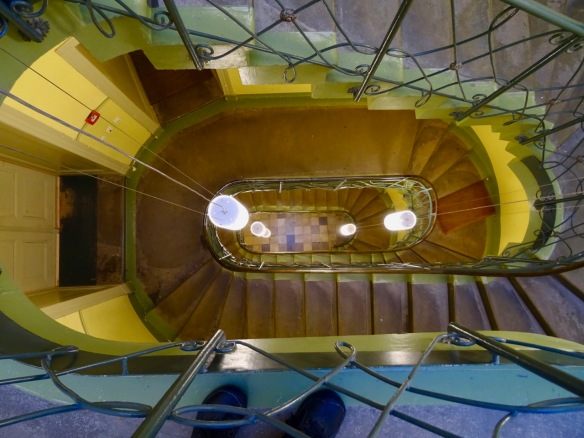 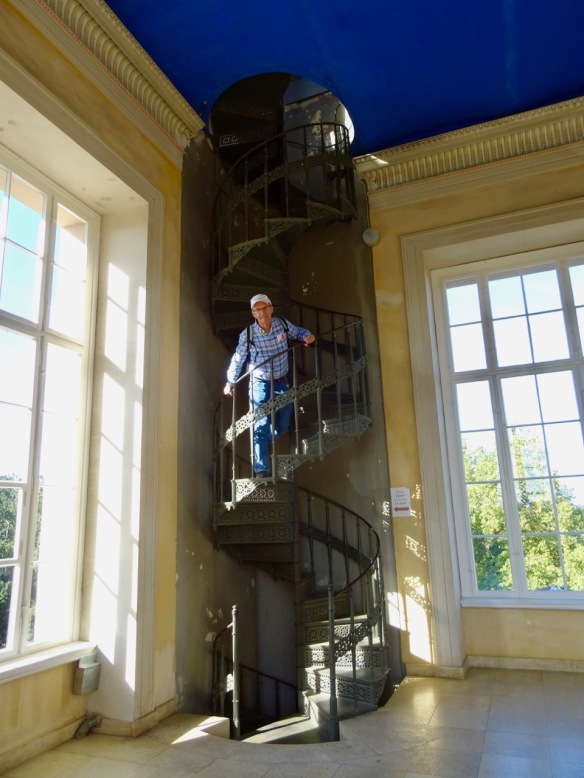 to get this view.

There is the East wing of this enormous building.

That dome way in the distance is another palace. The New Palace, built by King Frederick, is the largest and most impressive complex at Sansoucci, but it is way too far of a walk for us today and the park is closing soon. 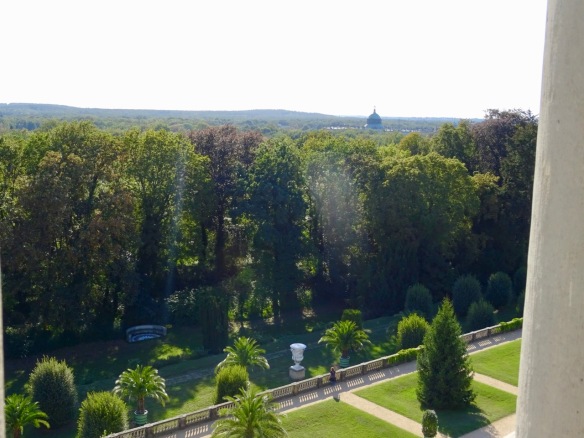 In front of the Orangerie. 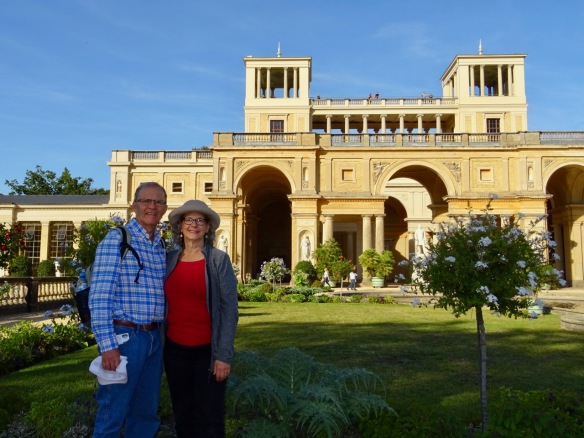 Every path here has a view at the end of it…something to entice you to walk and explore.

We find the Chinese House which Frederick had built to enhance his flower and vegetable gardens and we can imagine elaborate picnics here in the summer.  We make our way to the main gate just as Sanssouci is closing and catch the metro home.   We had a beautiful warm day for our time here.  A perfect day really.