Berlin has lots of museums! We bought a three day Museum Pass which gives us unlimited entry to over thirty museums! Today we visit the Pergamon Museum and the Neues Museum.

This model is a reconstruction of the Temple of Babylon. There were some pieces of walls from this temple on display.

I am often most drawn to small items in these exhibits, like these tiny ivory figures of mothers and their children, only about 3-4″ tall from 3000 BC.  I think they are incredibly detailed and beautiful.

This is the processional way which led towards the 6th Century BC Ishtar Gate of Babylon.   It is very impressive. 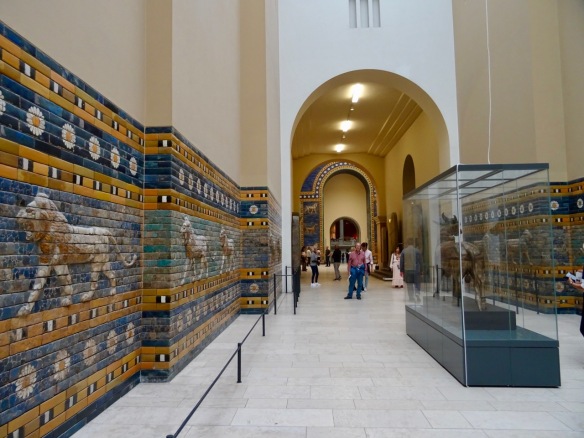 I loved this wooden sculpture.

Here is another view of this approach that gives a better idea of the size..

The reconstruction of the gate has original tiles around the animals. This is only a part of the gate, as the museum ceiling would have to be more than twice as high for the whole gate to fit.

These two creatures guarded the Assyrian King in 883 BC.  These are casts from the originals in the British Museum, which were each carved from a single piece of alabaster.  No idea who the guy is…it was impossible to get a photo without some stranger in the middle of it!

Times were tough for women. Take a peek at these laws from 3000 years ago. 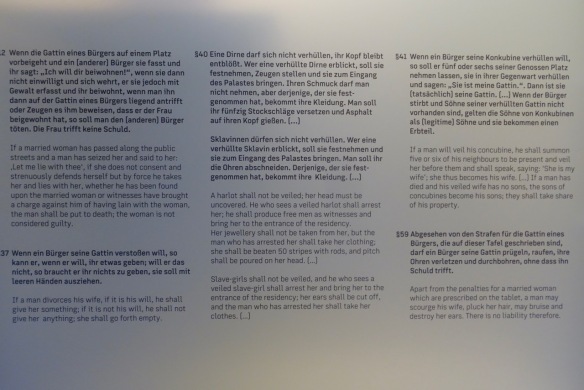 The saying “an eye for an eye and a tooth for a tooth” comes from the laws carved in this pillar known as the Code of Hammurabi, from 1750 BC.

This close up of one of the lions from the Ishtar Gate shows how the original pieces of tile were reassembled.

This is the condition of the tiles when they were unearthed.  Can you imagine trying to piece these thousands of bits together?

Another huge structure in the museum is the 2nd Century AD Market Gate from Miletus. This is the largest historical monument that has been reconstructed indoors.  It is about 30 meters wide and 16 meters tall. This grand structure was only the entrance to a marketplace, although it looks more like a palace.

This ivory box and horn were covered with intricate carvings. There were so many things to see and marvel over. 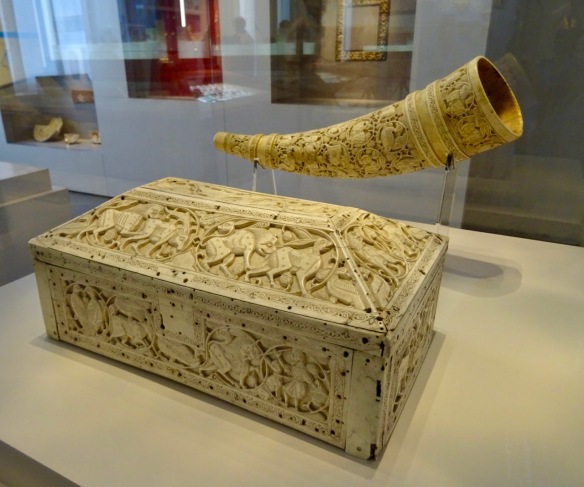 This intricately carved ceiling is from the Alhambra in Spain. We saw other ceilings like this when we visited there a few years ago. 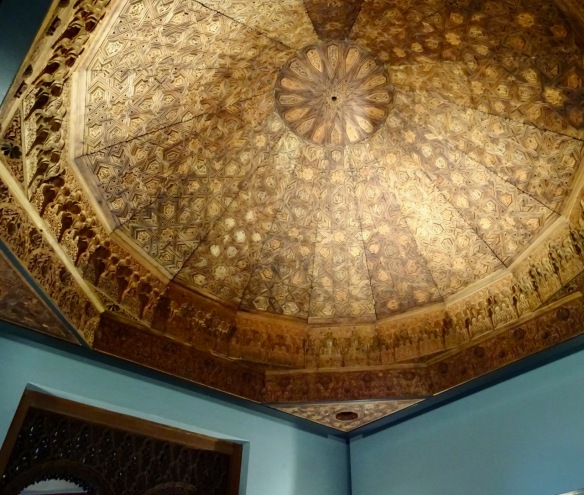 The 8th Century Mshatta Facade is 33 metres long and 5 metres high with two towers and part of a central gateway. This decorated western part of the façade of the Umayyad Palace al-Mshatta was a gift to Germany from the Ottoman Sultan in gratitude for the construction of a railway.  There were 7 of these towers on each of the four sides of this enormous palace.

The Aleppo room was built as a reception room by a wealthy Christian merchant in Aleppo.  The paintings Illustrate Islamic floral and geometric designs, scenes from the Old and New Testament, and Persian book illustrations.

“The selection of decorative Psalms, Arabic proverbs and Persian principles which frame these scenes deepen the impression of a community of different religious beliefs living together peacefully. The room is a visual expression of this harmonious diversity.” ~Jenny Farrell

The old city in Aleppo is actually a Unesco World Heritage site.  However, their civil war has destroyed much of the city. This beautiful room would likely have been destroyed if it had not been moved to the museum.

A view of the Alte National Gallery we visited yesterday.

Next we visit the Neues Museum.  This building suffered severe damage during the Second World War.  In 2003 work began to restore the building without erasing the traces of past damage. We see evidence of this damage throughout the museum. Note the bullet and shrapnel holes in the pillars…

and damaged areas in this room. 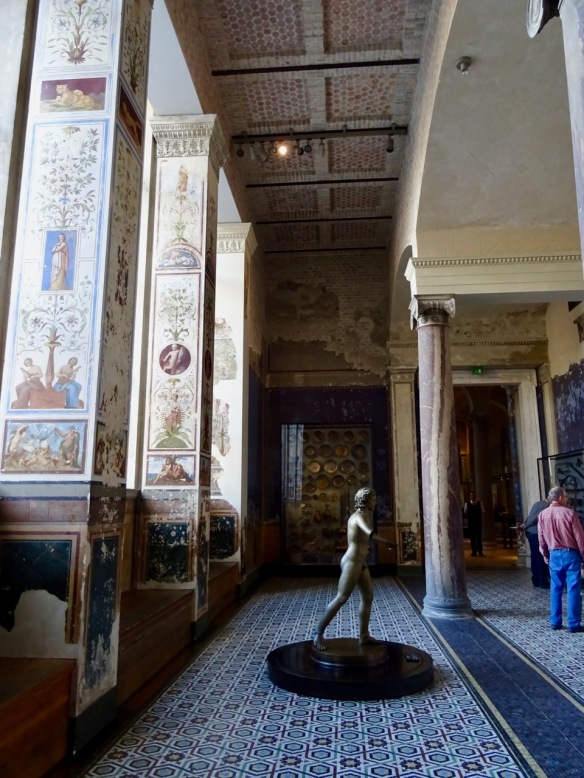 There were many pieces of ancient papyrus from the 4th Century BC.  I find it astounding that these fragile documents have survived.

Original paint remains on some of the Egyptian sculptures from 1290 BC!

This is a room that was heavily damaged during the war. These three panels are all that is left of twelve panels that were on the walls of this courtyard. We actually visited the three Egyptian temples depicted on these walls during our trip there in 2011.

The bust of Nefertiti (1,340 BC) is displayed alone, in the centre of a large room. No photos are allowed but no one objects to me drawing her. 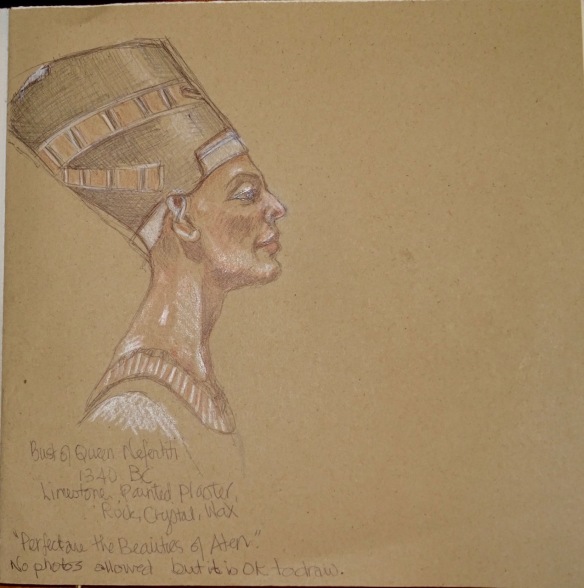 There are so many rooms filled with so many treasures.  It can be a bit overwhelming.

I thought the teeth on this Homo Neanderthalensis were astonishingly white and cavity free!

This elk from 10,700 BC was discovered during construction of one of the Berlin underground subways in 1956.

I forgot to post these sketches form the Altes Museum yesterday. 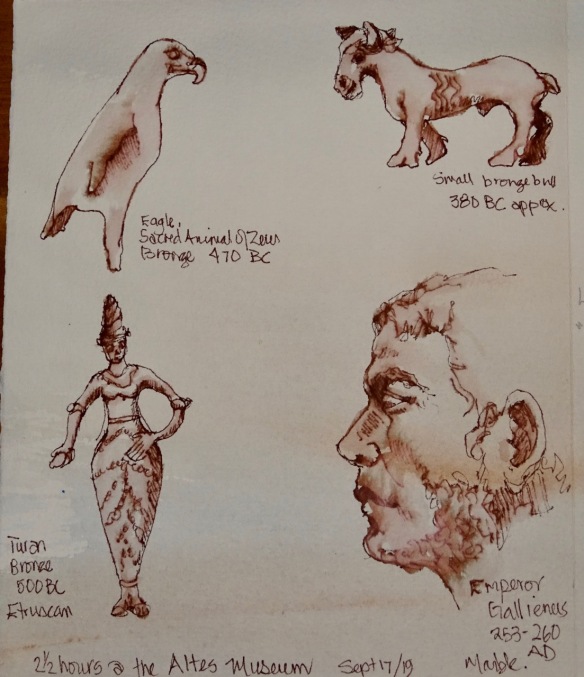