This morning we went to see the Lipizzaner stallions, but not a performance.  We went to the morning training session instead. We got to sit in the 96 euro seats for two hours and watch the horses train and it only cost us 9.5 euros each!   It was great and we both enjoyed it. We found out that to get those 96 euro seats we should have reserved months in advance!  We sat about half way down the side of the arena.

No photos are allowed and I was very good and didn’t try to sneak any!  It would have been so nice to have a few photos though.  These two photos were taken from posters advertising the performances.  The stallions are gorgeous!

I did a bit of sketching during the training and that was OK but it was hard to draw and watch what was going on a the same time.  After a bit I decided to just enjoy watching the training session and forget about drawing.

It is unusual to see any of the jumps that are performed in the performances during a training session.  We were very lucky, we saw two different horses perform the capriole!  The first stallion was experienced and he did three caprioles.  This is where the horse jumps straight up into the air, kicks out with the hind legs, and lands more or less on all four legs at the same time. It is a very difficult jump. The second stallion was young and still in training. He managed to get his forelegs up in the jump but the hind legs didn’t quite make it, but he tried three times as well.  We also saw the piaffe, the dance like trotting on the spot and several other of the special dressage movements.

The training session was two hours long.  Four half hour sessions with different horses for each session.  It went by very quickly and Bob said he enjoyed it too, even though he doesn’t love horses near as much as I do! 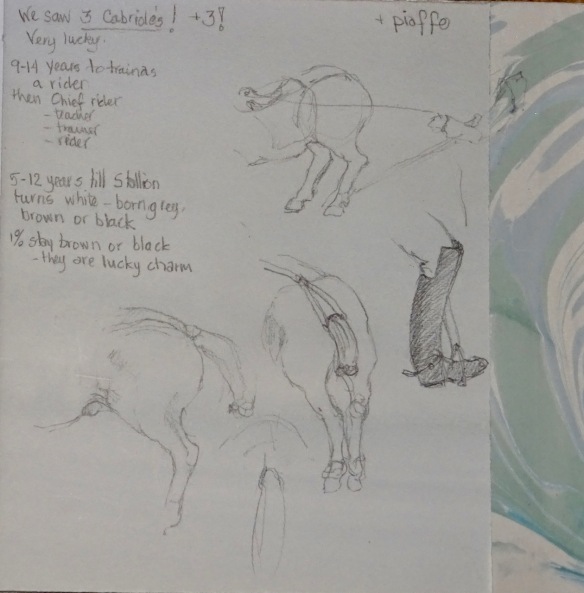 Next stop is the State Hall of the National Library.  It is so amazing!  It is hard to describe such a magnificent place.  The pictures probably do a better job, so here they are.  This is our view when we enter the library.  We both just stop and stare!  This library is nearly 60 metres long and 20 metres high and contains over 200,000 books!

One of the first things we see are these ‘secret’ doors the open into rooms with even more books.

The cases Bob is standing by held illuminated manuscripts.  I would have loved to be able to climb one of these ladders and pull a book or two off the shelves. 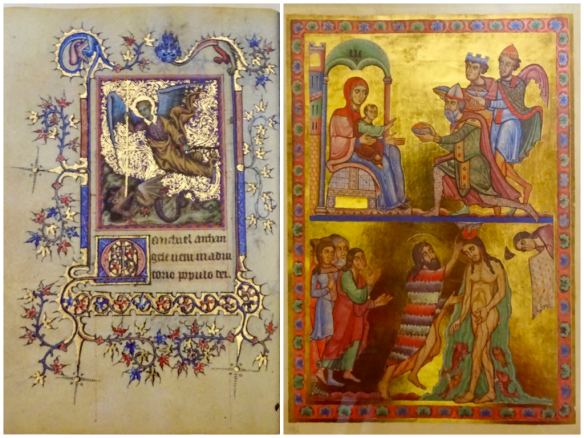 The globes have been in this spot since the mid 1700’s.

This statue is in the central oval of the library beneath a painted domed ceiling.

Here is a view looking up at the ceiling… 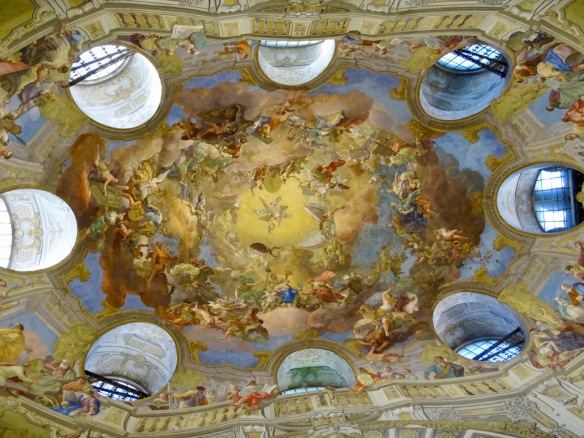 and a wide angled view of the central area.

We sit for a while just absorbing the atmosphere.

Looking towards the entrance from where I was sitting…

and towards the back of the library.

The second level is just as ornately decorated as the first.  I wish we could have gone there as well, but it was not to be. 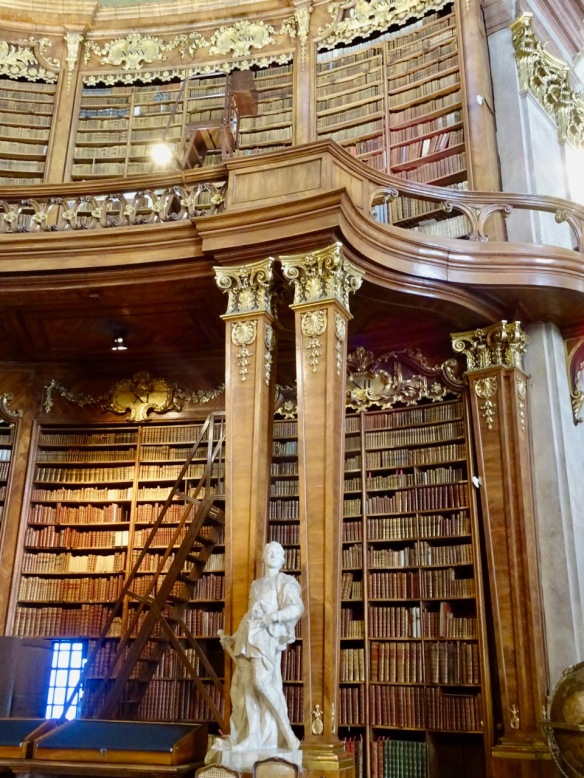 One last photo before we leave.  Here is a short video I made of the inside of the library. 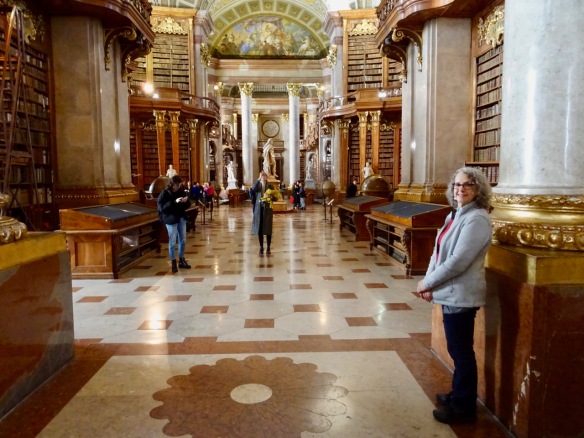 When we leave the library we pass the Lipizzaner stables.

I zoom in on these two beauties. 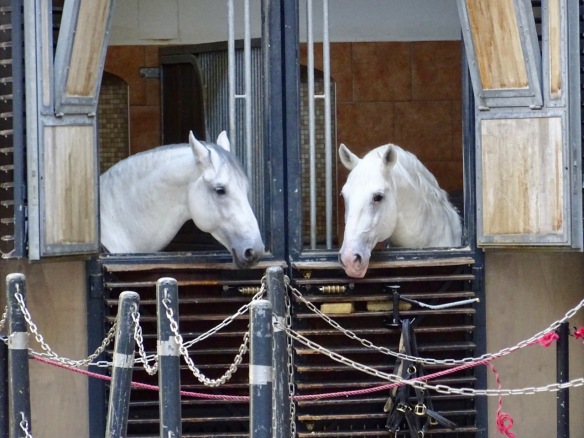 We stop at the Minoritenkirche because Bob says it has a mosaic life size replica of The Last Supper. 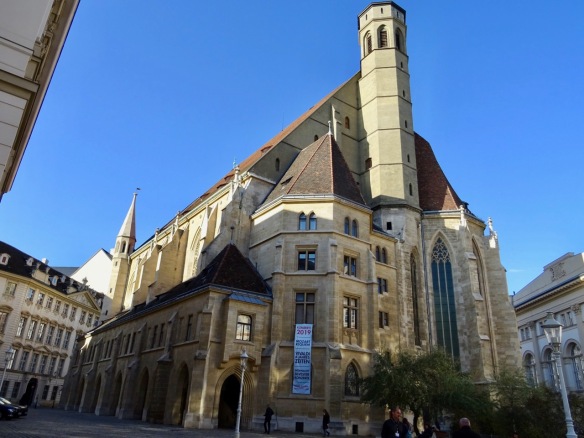 It appears to be painted on tiled panels rather than being a mosaic made with many small tiles.

We didn’t get to see The Last Supper when we were in Italy.  We didn’t know we had to get tickets far in advance, so I guess this is the next best thing. 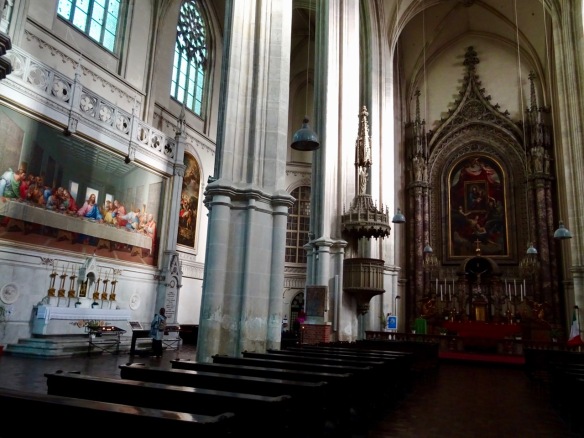 We walk towards the metro through a bit of a park…

where there are lots of people sitting enjoying the sunshine.

I was surprised there were so many yellow roses in bloom so late in the year.  Do you notice all the little white signs in the background?  This is a memorial garden and each rose is planted in memory of a person who has passed away.

It is a beautiful sunny afternoon.  Warm for November, but we still need our coats.

We stop at the Naschmarkt for something to eat.  This roast pig is for sale by the piece, starting at the back end.  Interesting but we decide on something a bit less exotic.

I love this huge art nouveau pot supported by four turtles.  Wish I had one like this at home!

We have a bit of time at home before I go to for another life drawing session at a pub called The Roo Bar.  Here are a 5 minute, two 10 minute and a 20 minute drawing.

A ten and twenty minute pose. 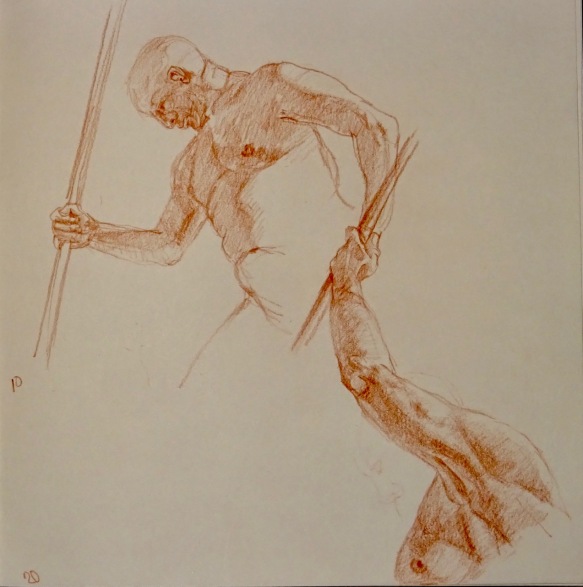 I think I liked these two 5 minute drawings the best.  It was a good night.