This knitted sculpture ‘Carmen’ is the creation of Eva Blahová, an artist and scenic designer living in Prague. 33 knitters from all over the Czech Republic were involved in this project and they knit over 50 meters of red ruffles to dress an existing sculpture.  It is pretty impressive.

These entrances are on this block of buildings. Although Prague was bombed in World War II it did not suffer the catastrophic damages of Berlin and Dresden.  There are so many beautiful buildings with lots of carved decorations here. 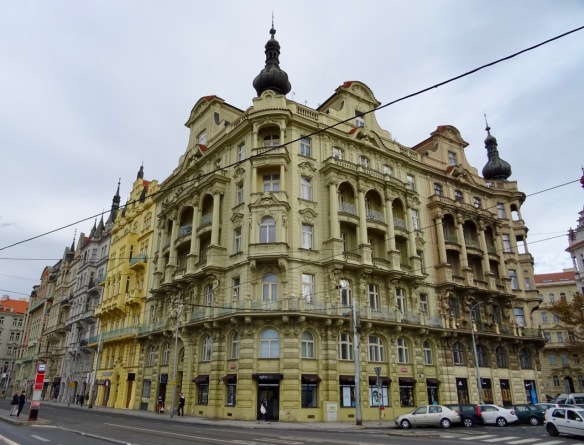 The Dancing House, or Fred and Ginger, as it is nicknamed, was built in place of a building that was destroyed during the war.  We think we know which is Fred and which is Ginger.  What do you think? 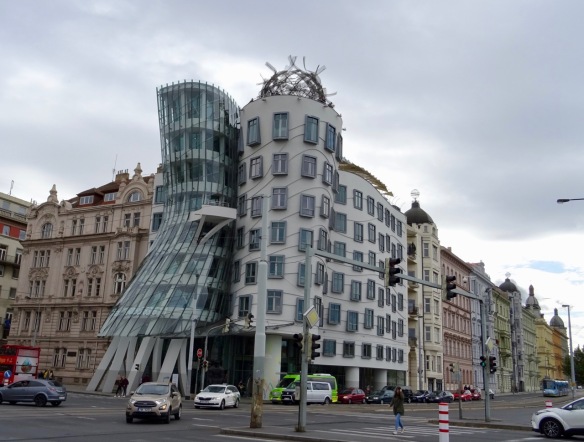 We crossed this bridge and had our picnic lunch in a little park with this view.  Prague has lots of trees and parks.

Here ae some more pastel coloured buildings we see on our walk along the river.

These statues holding up a balcony are quite wonderful.

I think Bob might have been a locksmith in another life.  He is always noticing interesting locks.

We arrive at the most famous Baroque church in Prague, St. Nicholas Church, at Old Town Square. The dome has a diameter of 20 m, with a  height of over 49 m, making it the highest interior in Prague. The church was completed in 1735, replacing a parish church dating back to 1273.  There is so much history everywhere we visit.  Canada is such a young country in comparison.

The ceiling fresco is over 1500 square metres in size and is one of the largest in Europe.

We climb to the second floor balcony for some great views of the church.

There are interesting things to see everywhere if you keep your eyes open, especially down the side streets. 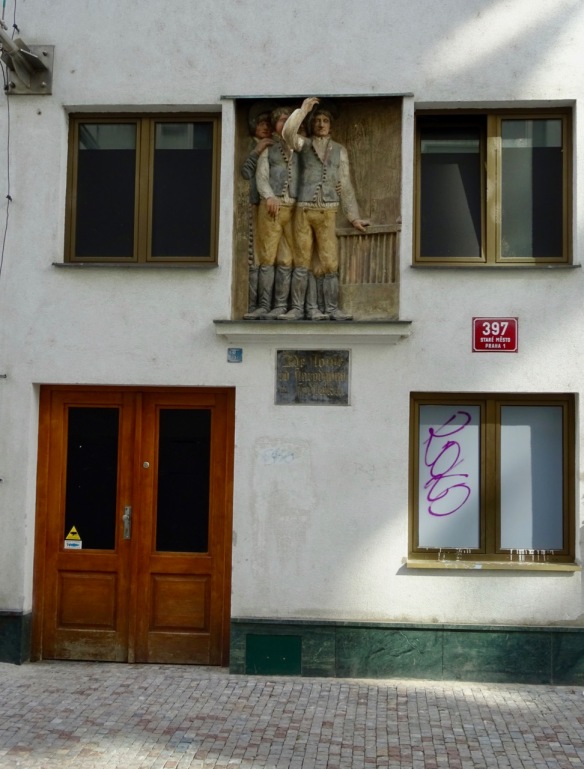 These painted blocks are a fundraising project for disabled people.  You pay for a brick and then get to paint it.  We didn’t have time today but I see that someone from Canada contributed a brick. 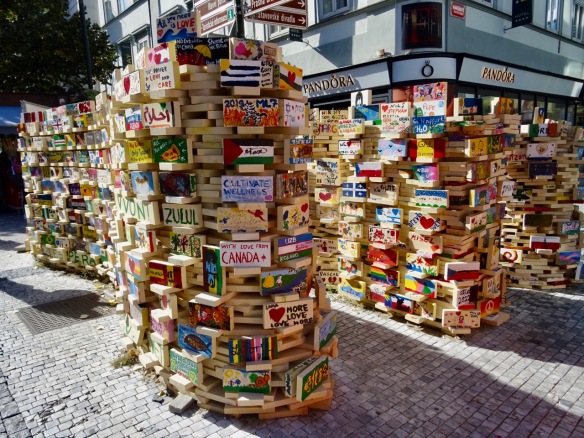 At the Mucha Museum I learn the Alphonse Mucha’s name is pronounced mooka, not moosha as I thought.  We see many of his lithograph works that I am familiar with.  The Four Flowers..

and the Four Arts, which celebrate Dance, Painting, Poetry and Music. 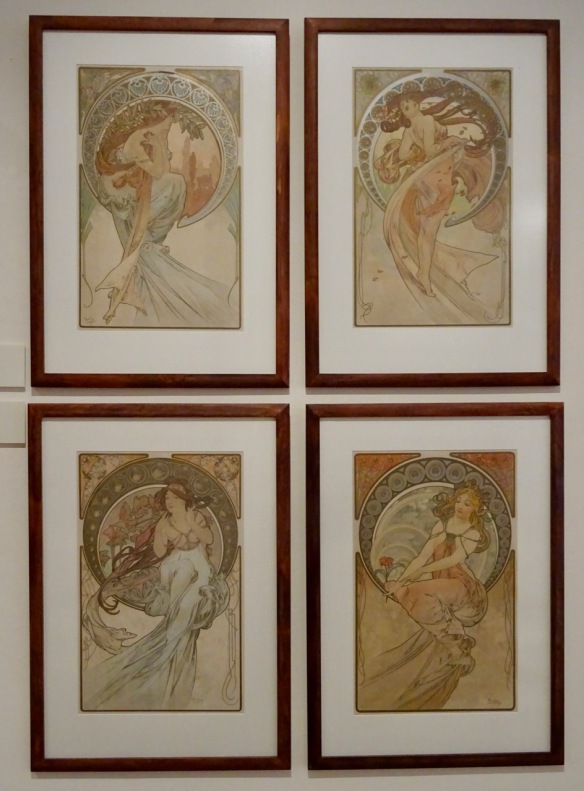 I particularly loved being able to get close up to some of Mucha’s drawings.  Woman on a Bear Skin is drawn with a pencil and a white crayon on a brown ground.  It is amazing.  A photo does not even begin to do it justice.  It was also behind non-glare glass which does not photograph the best. 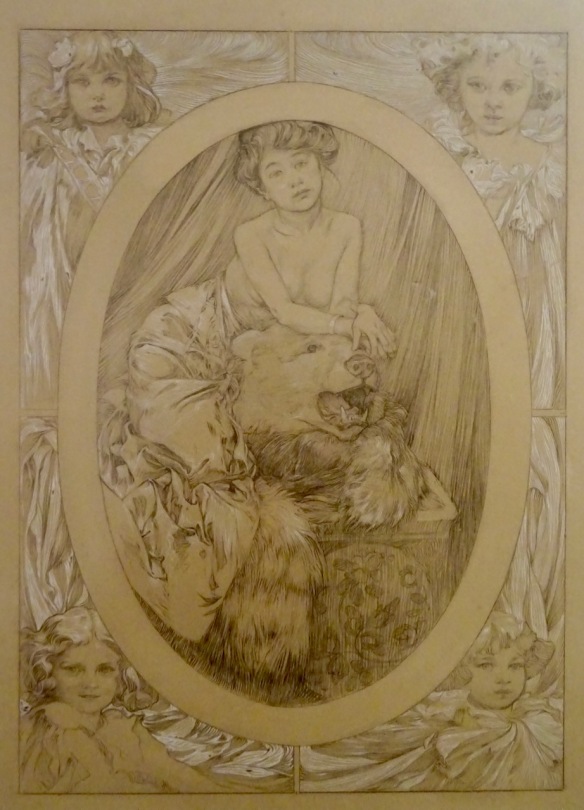 Winter Night, or Siberia, may have been Mucha’s response to the terrible suffering of the Russian people after the Bolshevik Revolution.  There was a famine that killed millions of people. It is difficult to see, but in the upper left of the painting there is a pack of wolves.  The peasant woman seems to have resigned herself to her fate.  I was not aware of Mucha’s large oil paintings.  He completed a series of very large canvases called the Slav Epic, a series of 20 enormous canvases that show the ethnic roots of the Czech people.  Unfortunately we weren’t able to visit the Czech National Gallery of Modern Art  to see these paintings as it was under renovation. This short video shows the Mucha Museum and the Slav Epic. 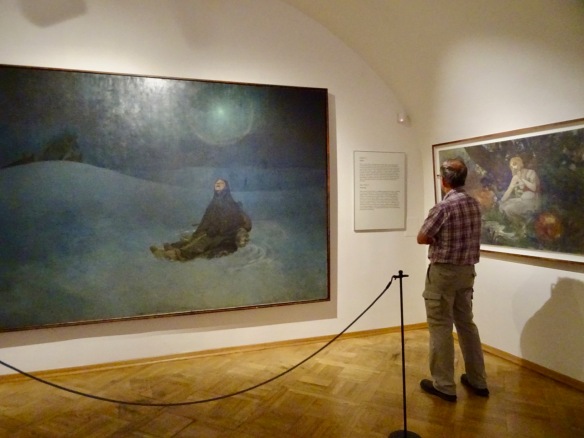 This collection of photographs was interesting.  It showed some of Mucha’s models, and the bottom two middle photos are Mucha in his studio and Gaugin playing the piano…without any trousers!

Pages of his sketchbooks are on display.  I love seeing artist’s sketchbooks.  It is a way of understanding how they think about their art.

Not all the sketches are detailed drawings.  There are some quick gestural studies as well. 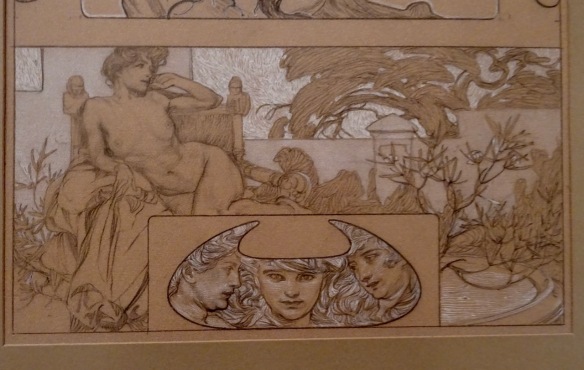 This is a study for the stained glass window in St. Vitus Cathedral. Mucha was skilled in many areas of artistic expression.

Mucha created this famous poster for the ballet named Princess Hyacinth.  I was happily snapping photos when near the end of our visit a docent told me that photos were not allowed.  I was surprised as we have been able to take photos, without a flash, every where else we have been.  I am very happy she didn’t see me until near the end of our visit!

One of many flower stands in the city.  I often see both men and women carrying bouquets of flowers.

We saw a toy store so took a peek inside. OMG! it was huge, very noisy and had a full size carousel!

This made us think of the Hotel Europa we stayed at in Egypt a few years ago.  It certainly was not grand  and it wasn’t a pleasant experience at all!

Walking back along Wenceslas Square I notice that someone has knocked over the horse sculptures we saw earlier.  I like this statue, all covered in sewn leather, with his hands sewn to his head and groin.  Not sure what it is supposed to represent but it does make viewers pause and contemplate.

I keep trying to get a photo that shows how strange people look on these long metro escalators. There is an optical illusion that happens and everyone appears to be either leaning forward or backwards, depending they are going up or down the escalators.  Somehow it just doesn’t show that well in a photo.  The camera doesn’t see things the same way as our brain does.  It is very curious and I comment every time we ride these crazy, long, steep fast escalators. 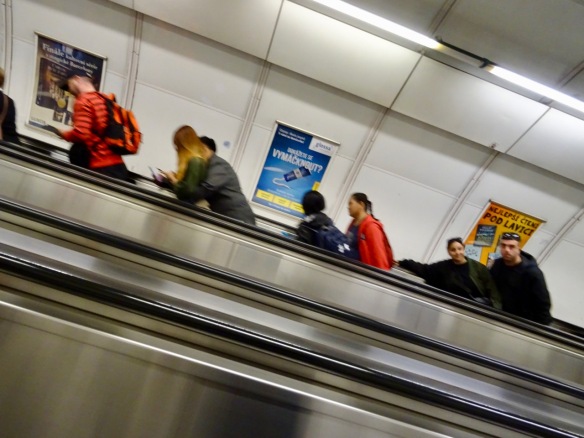 This church is in the park right beside the metro stop near our apartment.  We were curious to see inside but it is under renovation and the doors are locked.  We sat and had tea in this park the day after our flight into Prague over a month ago.

I wanted to get a photo or two showing how people drink alcohol walking down the street, in the parks, and even on the metro (although they aren’t really supposed to drink on public transit).  We see that in Prague and it was especially prevalent in Berlin.  People walked around with their bottle of beer everywhere.  Not what we are used to seeing at home.