The Residence Museum is the former royal palace of the Wittelsbach Monarchs of Bavaria. The Residence is the largest city palace in Germany.  This Residence has 144 rooms open for viewing!

The first room we visit is the Shell Grotto, which is decorated with sea shells in intricate patterns.  It is rather bizarre and not what we expected to see in a royal palace.

The next room is the Antiquarium which was built in 1568 as an exhibition room for Duke Albrecht V’s collection of antiquities.  The room is 66 metres long and the ceiling is decorated with paintings of 102 views of towns, markets and palaces in Bavaria.  It is truly a remarkable room. 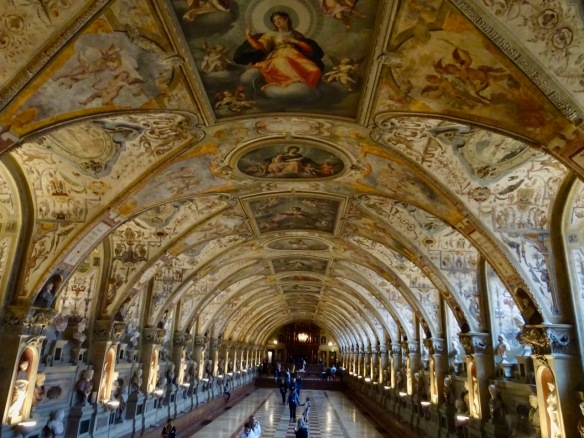 The faux painted ceiling in this room is an optical illusion.  In this photo you can see that the ceiling is not very high.

But when I stand right under the chandelier in the centre of the ceiling this is what I see… a high domed ceiling!

We see many furnished rooms, including this throne room, and lavish bedrooms.

One of the Electoral rooms was decorated with lots of paintings…

including these two of the summer residence of Nymphenburg painted in 1761, which we just visited last Thursday! 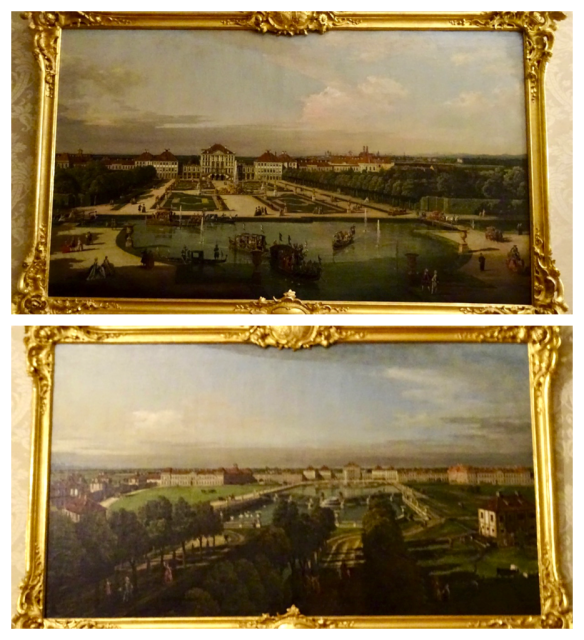 The Court Church of All Saints was destroyed during the Second World War and was only opened again to the public in 2003.  It was left undecorated and it is now used for concerts and other functions.

This small room, or Cabinet, was decorated with 18th century pastel portraits which I am particularly interested in. 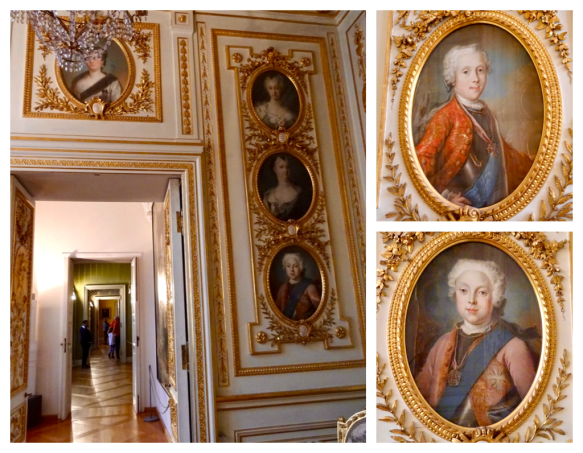 Here is a model of the palace.  It really is huge and sprawling so it wasn’t the easiest to navigate,

The Trier rooms were built as guest apartments. 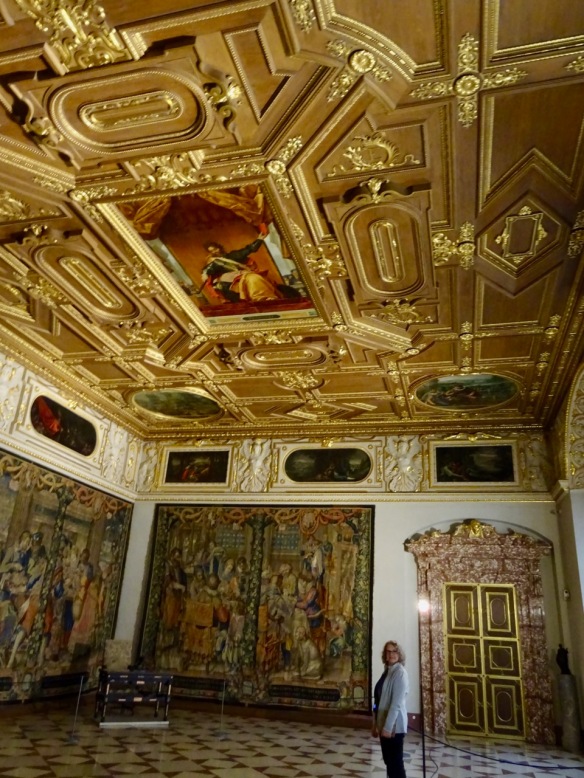 Here is a close up of one of the tapestries.  They are amazingly well preserved. 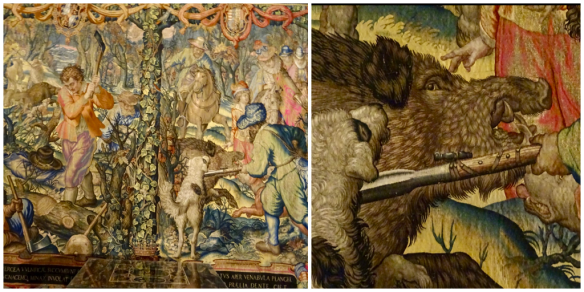 All the rooms in the palace are connected by a series of doorways lined up in a row.  I think this must have made it difficult to have any privacy as people would have to walk through the rooms to get from one to another.

This is one of the Ornate Rooms that were used for diplomatic meetings and court ceremonies.

The Green Rooms are an art gallery.  Here is our reflection in one of the tall mirrors.

The chandeliers are reflected in the mirror on the end wall of the room.  We were surprised when a door was opened in this end wall and a tour group disappeared into what seems to be a secret room.

The walls in the Cabinet of Mirrors have many blue and white vases sitting on little shelves.

The Cabinet of Miniatures has red lacquered walls inset with many miniature paintings from floor to ceiling..

I think this was called the Queen’s staircase.  In any case, it is very grand.

and some more rooms in the Queen and King’s apartments.

The floors in these apartments are inlaid wood, each room has a different ornate pattern.  It must have taken a very long time to build these floors.  The seams between the pieces of inlaid wood are perfect.

There are rooms full of table settings that were used in the palace.  The table with the gilded plates on the top right is set for fifty guests! The small chapel was the private place of worship of Duke Maximilian I and his wife.  It was here that the Duke kept his collection of precious relics, which are the bodily remains of saints. 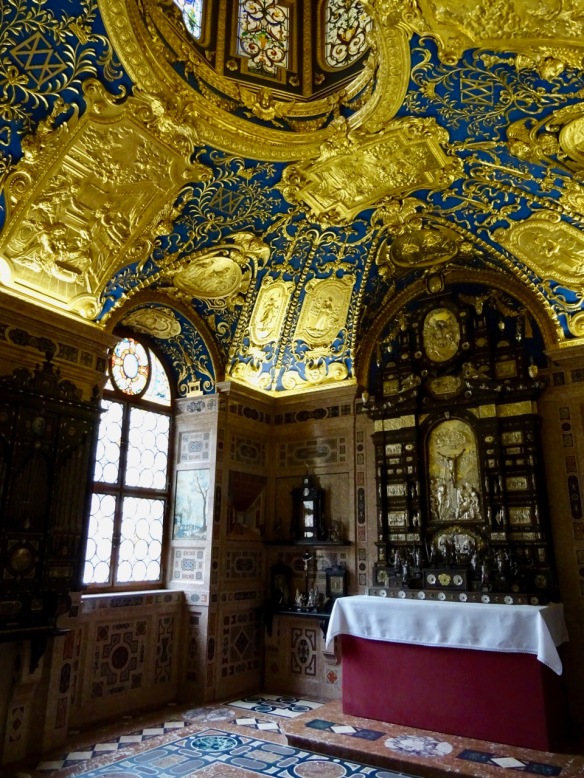 We thought we were finished, but realized we missed a whole wing of rooms but we couldn’t figure out how to get to the.   A very helpful guard escorted us back into the palace and directed us to the rooms.

We also saw these paintings which were painted on enamel panels. They are copies of famous paintings, and we have seen the originals of many of these on this trip. It was a surprise to see the copy of the Mona Lisa.

This Hall of Ancestors was being cleaned and restored. 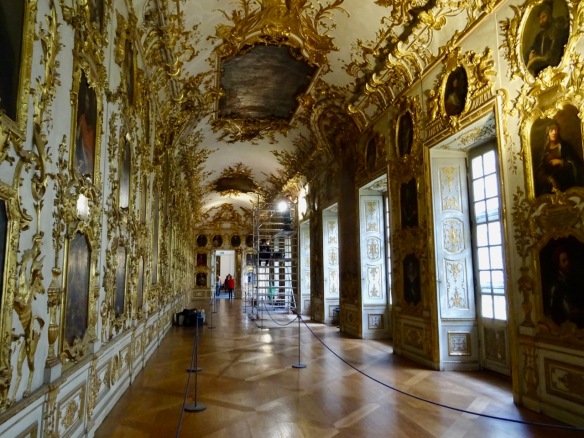 This woman was using a tiny paintbrush to touch up the gold gilded frames. It is painstaking slow work. 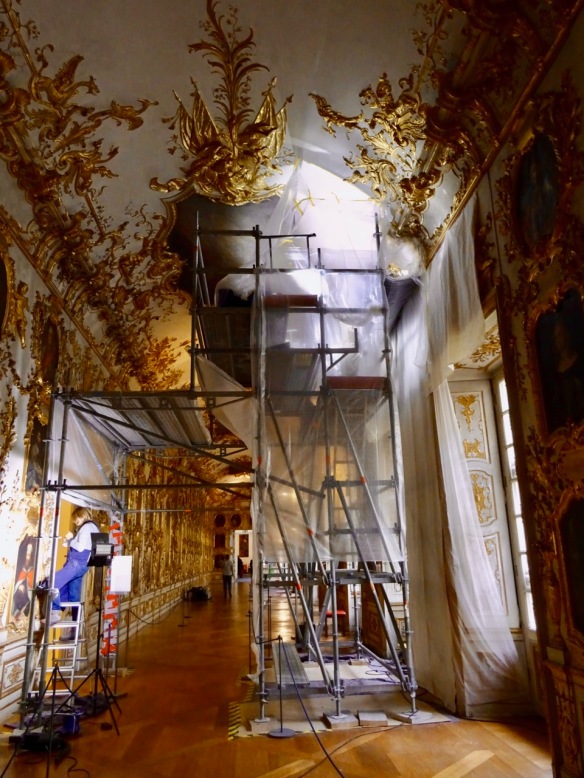 Here is the museum, and it is drizzling when we emerge. 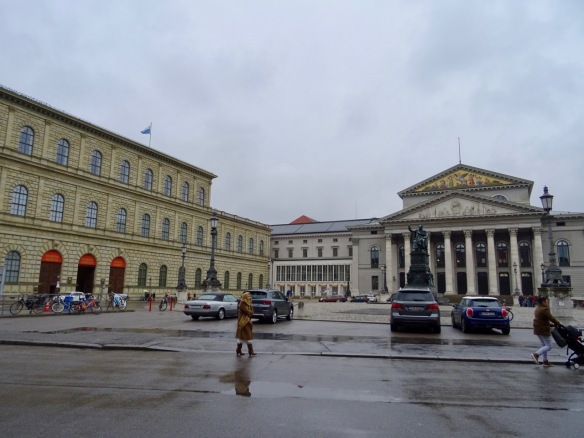 On the way to the metro we walked past some of those high end shops we saw yesterday.  The stores are still open so the widow displays are complete.  Notice the prices on these two watches, 160,480 euros and 239,450 euros!! 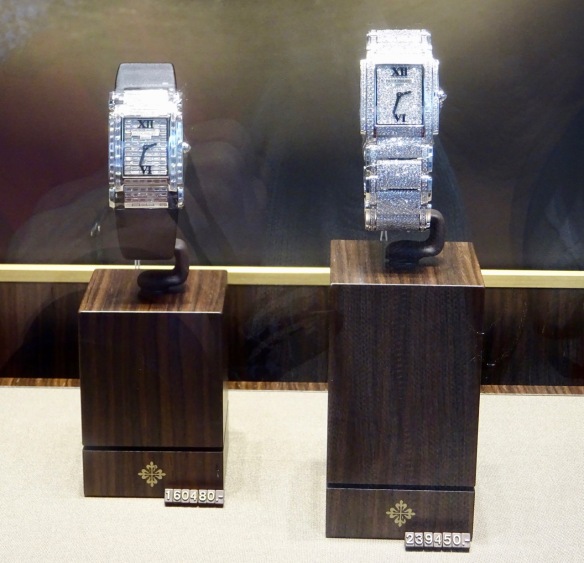