We should have pre-booked tickets for Schindler’s Factory Museum today and for Auschwitz tomorrow. There is a chance of getting last minute tickets at both of these sites so we are up early for our 45 minute walk to Schindler’s Factory today.  We arrive shortly after it opens at 8:30 and we are relieved to get tickets. It’s an interesting walk. Here is some street art we see on the way.

I never watched the movie ‘Schindler’s List’ because movies about terrible factual events  haunt me. We visited Dachau years ago when we travelled to Europe one summer with our young daughter. I still remember that day and I know that today and tomorrow will be difficult, but it is something that is important to do. This is one of the signs we read after entering the museum.

Jewish people were hung along the train tracks for all to see.

Walking through this dark exhibit about the wall around the ghetto.

It was thought that starving the Jewish people was an effective way to weaken and destroy the morale of the Jewish population, especially the young people. 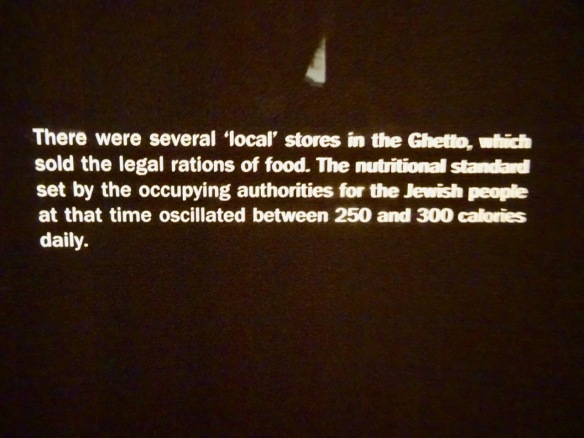 Some of the exhibits as we walk through the museum. This shows the crowded conditions inside a home in the ghetto.

The corridors are covered in articles and photographs. There is so much to see and read.

More exhibits, this one of everyday life in Nazi occupied Krakow. …notice the armband that Jewish people had to wear so they could be identified as Jews.

One of the camps.

A hiding place in the cellar of a house in Krakow. Even though it meant death for anyone found helping a Jew, by hiding them or even offering food or assistance of any kind. many of the Polish people did exactly that.

Oskar Schindler was one of these people. He really wasn’t a man of great character, he lied, cheated and stole what he could, but he was instrumental in saving the lives of 1200 Jews. He also treated the Jews working at his factory better than in any other factory or work camp. There are videos of survivors talking about their experiences during this time.

Some of the people that were saved by Oskar Schindler. Two of the survivors became doctors and one became a Supreme Court judge. Everything in this museum is difficult to watch and listen to, but we need to know and remember what happened. I have heard it said that we need to do this so history will never be repeated, but I wonder. There is so much hatred and racism in the world today that I can no longer believe that something like this will never happen again. It is frightening wondering what the future will bring.

We stop for tea at the Modern Art Museum cafe. It gives us a chance to recover form the heavy content of the Schindler Museum.  On the way out I notice this vending machine. Notice the name of the drink it dispenses. 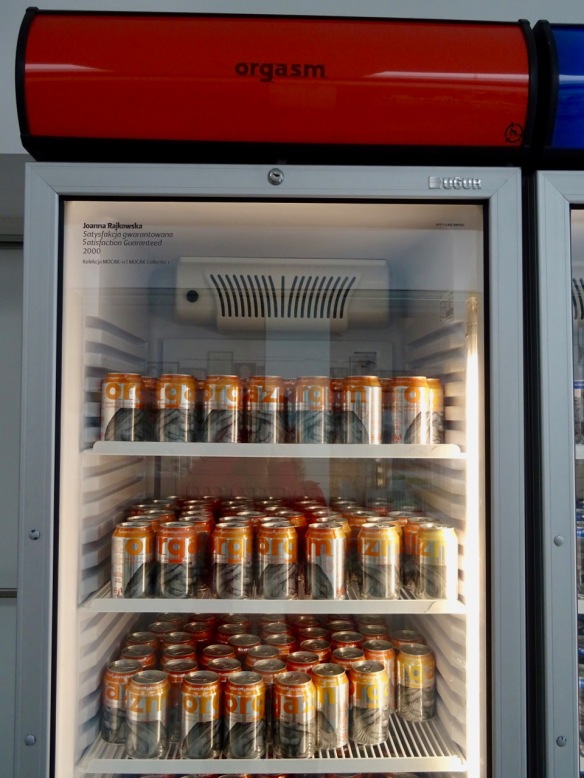 I try out the cement bicycles…

and Bob checks out an installation in a town square.

Interesting artwork in one of the shops we pass.

We cross this pedestrian bridge over the river and we cannot decide how these sculpture stay right upright. They appear to be balancing on cables with no support wires yet somehow manage to stay right side up. We just can’t figure it out. 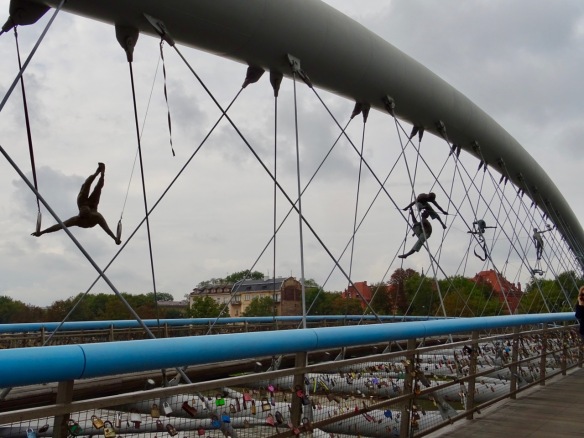 Here is an interesting way to keep an old building while erecting a new modern one!

We stop in at a basilica near the old town which has a very impressive altar. I wonder if it is real gold on all these altars? OK, just did a bit of research and it appears that real gold foil is used.

I always peak into open doorways. They are often not very attractive doors but they sometimes open on beautiful interior courtyards and gardens.

A typical street side restaurant on our walk back to our apartment. 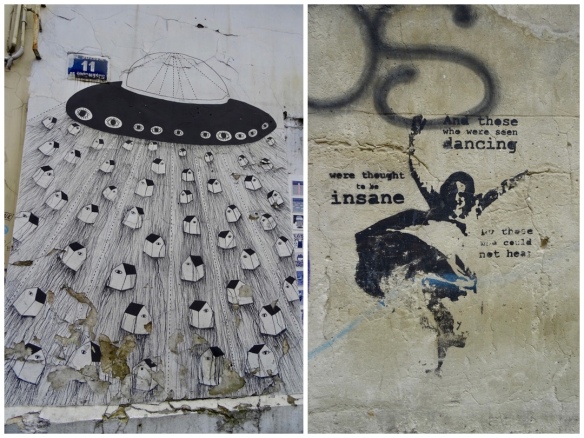 The sky is getting darker just as we enter the main old town square.

This church has one of the most impressive altars in all of Poland but there is a service happening so we are not allowed in.

There are lots of horse drawn carriages for hire. I was tempted but it really felt like the rain was coming.

These are enormous, about a foot high and cost between $14 and $20 each!

This guy tried to challenge Bob to a fight, but no luck, so… 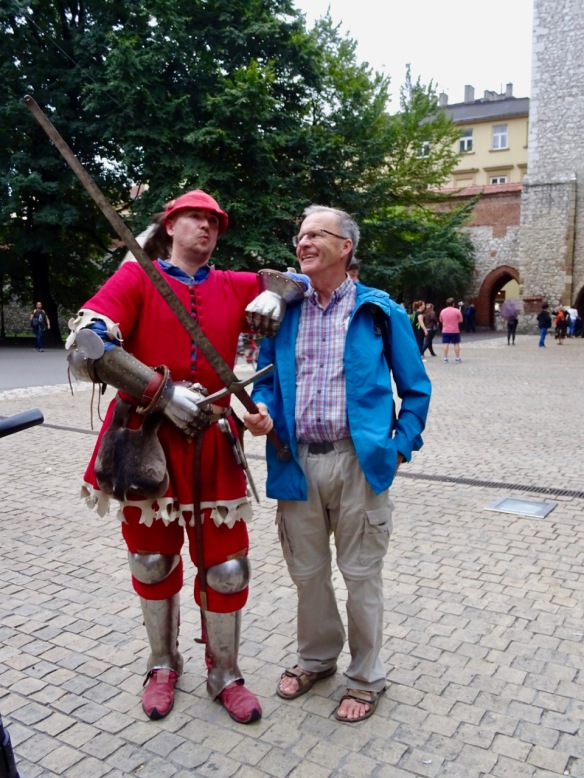 He tried to win me over!

An interesting sculpture of Jan Matejko who was a 19th-century painter native to Kraków.  He is renowned for his large oil-on-canvas paintings of historical events in Poland.

This street leads towards the train station with its huge attached shopping mall.

One more church on the street just before the train station. It was dark inside except for the light shining on the altar. 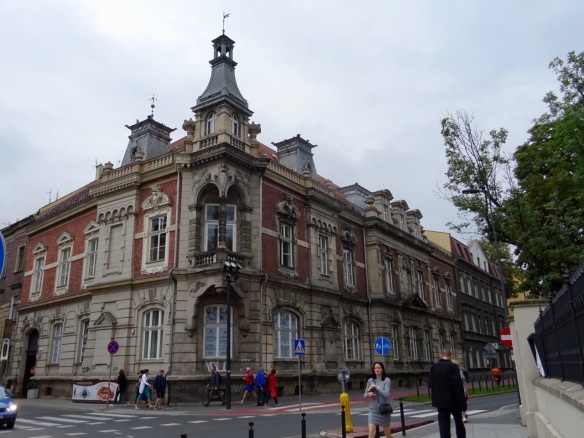 Juxtaposed with the interior of the train station shopping areas. It is huge, three floors with hundreds of very modern shops.

We pick up a few groceries for supper and head home, in the rain. It has been a long day, We walked 21,262 steps!  No wonder we are both tired.

The Piazzale Michelangelo gives panoramic views over Frienze. We can see the bridges over the Arno River… 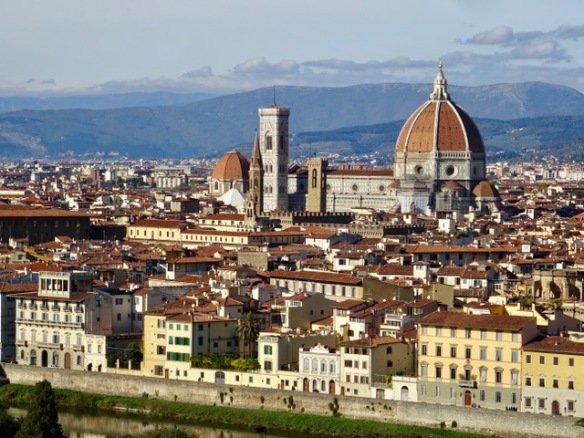 and some of the ancient town walls. 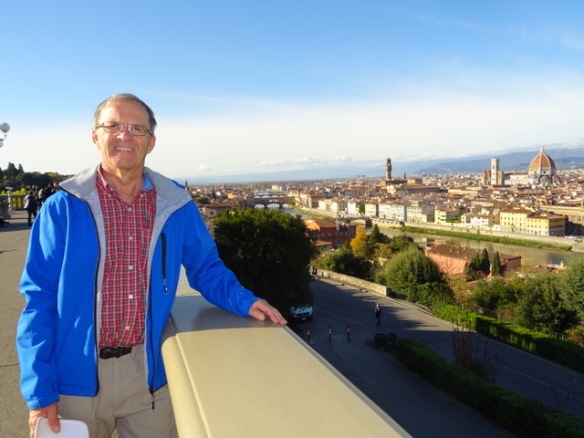 There is a copy of David here but it doesn’t have the same impact as the original. 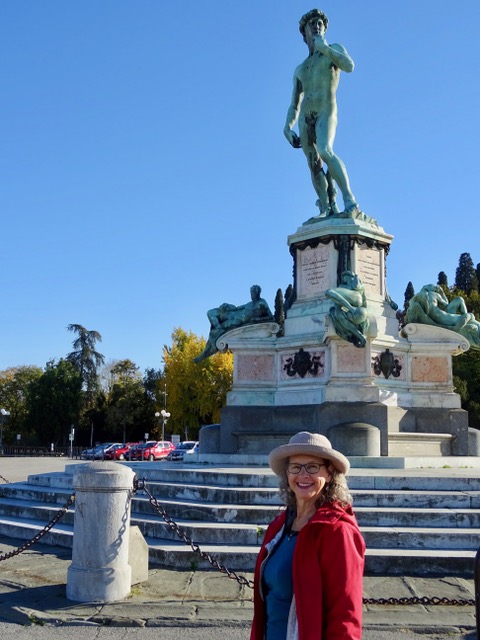 I love the feet on these old lampposts on the Piazzale. We visited this spot on our first trip to Firenze one hot summer night long ago. 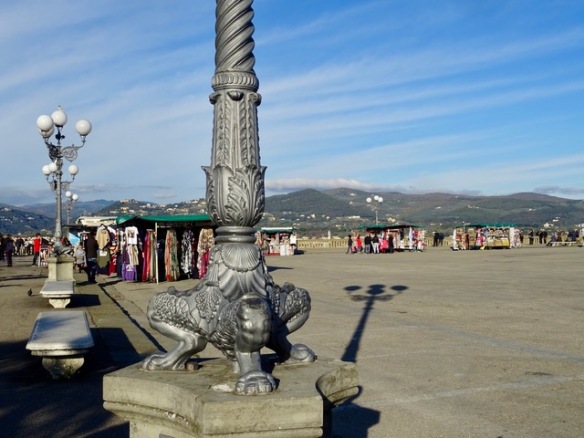 We explore the streets in the Oltrarno area on the south side of the Arno River. There are lots of interesting little shops and art studios.

We also see a lot of interesting street art in this part of Florence.

and see these very large albums in another shop window. I am so glad I bought my sketchbook in Venice. I haven’t seen another one with good drawing paper.

We cross the Arno admiring the reflections on our walk to the train station to find bus to take us home.

There are lots of interesting windows along the way.. 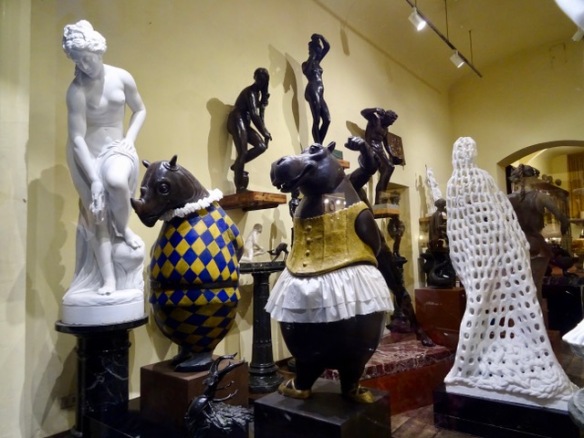 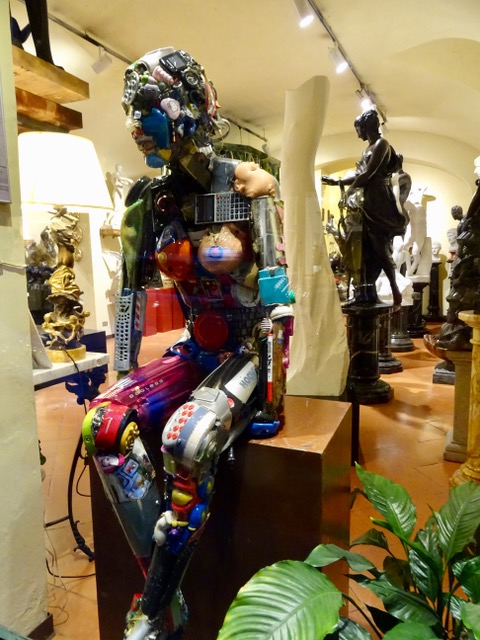 and a garage that parks its cars one on top of the other! 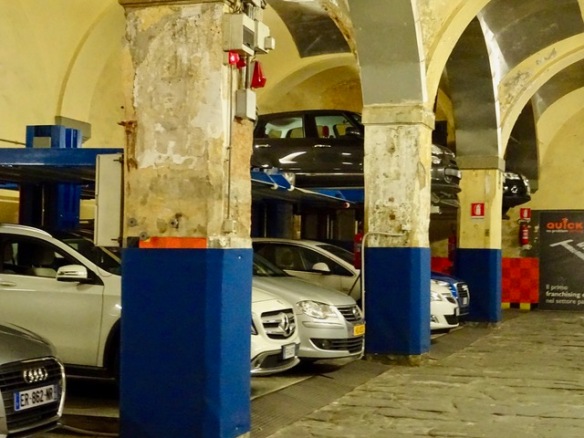 We were also lucky enough to see a murmuration of Starlings near the Santa Maria Novella train station.  It was getting dark so I didn’t get the best photo but there were thousands of birds flying above us, swirling, swooping in intricately coordinated patterns.  They were also very noisy as they settled into the trees for the night! 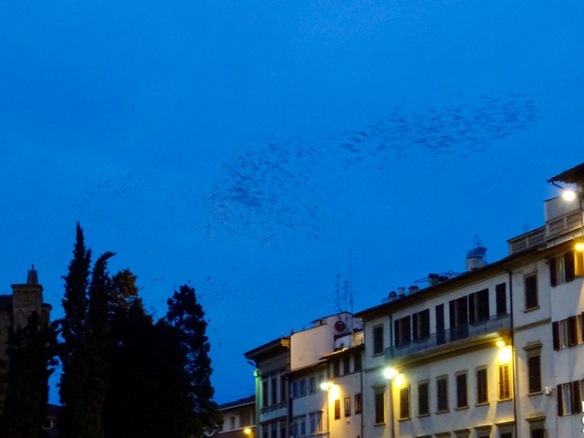